In preparation for their 2017 Spring Budget, the Liberal government is allowing Canadians to participate in the process. From their budget consultation page, “Tell us how we can help your family, strengthen the middle class and grow Canada’s economy. When you have an economy that works for the middle class, you have a country that works for everyone. That’s why our approach to growing the economy puts people first.” 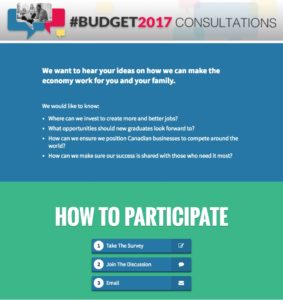 We encourage you to get involved in the budget consultation process. There are three means of getting involved: 1. Take the survey; 2. Comment on different ideas that have been proposed; 3. Send an email submission.

You can also send an EasyMail letter in just a couple of minutes by clicking one of the options below:

After having completed the survey section myself (there are four sections: Infrastructure, Innovation, Jobs, and Trade & Investment) I found the questions were geared towards supporting the Liberal’s current plan of spending more and more money on government programs rather than eliminating debt or taking on the complicated tax process. For instance, Question #3 under infrastructure states, “The Government is investing over $120 billion in public transit, housing, the environment and other infrastructure projects over the next decade. These investments will create jobs now, grow our economy over the long term, and make our communities more livable. How important is it to you that the federal government work with provinces, communities, and other partners to make sure we get the most value for every dollar and that local needs are met?” What follows is a selection of very important to not important. The questions often simply assume that government involvement in virtually every aspect of the economy is beneficial. For example, another question asks, “What actions would you like to see the Government of Canada take to help Canadians develop their ideas and get them to market?”

Getting involved in this budget consultation process is a great way to let our Government know that you are concerned about fiscal responsibility and the direction our country is heading.

Despite the obvious ideological problems with the survey, getting involved in this budget consultation process is a great way to let ourGovernment know that you are concerned about fiscal responsibility and the direction our country is heading. There is room in many of the survey questions to add other comments in the ‘Other’ section. I took the time to add ‘high taxes’ as a big hindrance to Canadians’ abilities to create new ideas, products and services, and ‘debt reduction’ as not only an important long-term focus for economic stability, but also a moral issue (since national debt is a form of theft from future generations).

I highly recommend sitting down for 5 minutes and writing a 2 or 3 paragraph email or letter in addition to completing the surveys.

Canadian households continue to sink into more and more debt. A society built on entitlement, where the civil government exists solely to give me everything I need, nay, everything I want, will eventually suffer. Are we, as Christians, falling prey to this type of thinking?

We must be careful that we recognize the proper and limited role of civil government. We also need to recognize our individual role in society, the role of the institution of the family, the church, the charitable sector and the marketplace. We must be careful to not allow in our own minds and actions the poisonous idea that our help comes from the name of the State, who made hospitals and schools and protects us and cares for us and feeds and clothes us.

‘Give me everything I need, nay, everything I want, will eventually suffer. Are we, as Christians, falling prey to this type of thinking?

Essential points to consider when writing:

For analysis on the current budget released in March 2016 check out https://arpacanada.ca/news/2016/03/29/analyzing-the-federal-budget/

See ARPA Canada’s submission for the 2012 Budget for some ideas and talking points when making your letters.

For more articles on this topic:

See below for an illustration of what such a large debt really means. Be aware that it uses American numbers, but the principle applies to Canada in the same way and it’s worth watching until the end:

How Should Christians Respond to a Guaranteed Livable Basic Income?