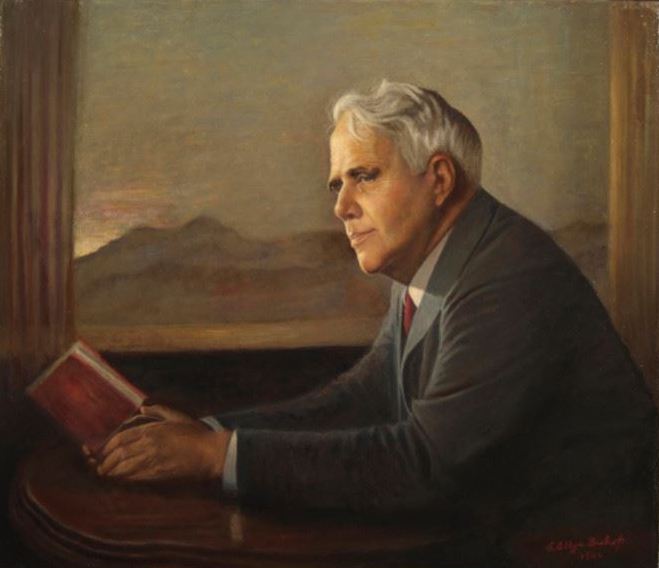 Portrait of Robert Frost by A. Allyn Bishop

The simple answer: “Because grandma is not a dog.”

As Barbara Kay eloquently wrote in the National Post a few years back,

…if we applied human standards of compassion in all things to our treatment of animals, our willingness to euthanize them when they are suffering would be “compassion’s” exception, not the rule.

Sure, we euthanize animals when their lives are a burden to them (and us). We also line-breed them when we want more of them, neuter them when we want fewer of them, give them away when our children develop allergies to them, control what and how much they eat, when and where they sleep, and when they may go outside to relieve themselves. Those in our care who do have sex with others of their species only do so when we permit it, infrequently and only for breeding purposes. We separate them from their biological families to make them members of our own.

Is all that compassionate? Not if they were human. But they’re not human, you see, so there’s nothing unethical in any of those actions.

One of my favourite poets, Robert Frost, addresses one aspect of this problem in his poem “The White-Tailed Hornet”. After observing a hornet “instinctively” attack an exposed nail head and then a berry, thinking it was a fly, and then finally hunting a fly but failing to capture it, Frost ponders the question of instinct, origin and comparison.

Won’t this whole instinct matter bear revision?
Won’t almost any theory bear revision?
To err is human, not to, animal.
Or so we pay the compliment to instinct,
Only too liberal of our compliment
That really takes away instead of gives.
Our worship, humor, conscientiousness
Went long since to the dogs under the table.
And served us right for having instituted
Downward comparisons. As long on earth
As our comparisons were stoutly upward
With gods and angels, we were men at least,
But little lower than the gods and angels.
But once comparisons were yielded downward,
Once we began to see our images
Reflected in the mud and even dust,
‘Twas disillusion upon disillusion.
We were lost piecemeal to the animals,
Like people thrown out to delay the wolves.
Nothing but fallibility was left us,
And this day’ s work made even that seem doubtful.

Frost’s allusion to Psalm 8 – “You made man a little lower than the angels” – makes well the point that if we accept that we are mere animals, then maybe we should only be treated as animals. Social Darwinism has us oriented downward instead of heavenward.

But the Judeo-Christian worldview re-orients us.

Photograph courtesy of © 2006-2017 Jones Library, MA and its representatives. All rights reserved.

Press Release: Euthanasia should never be a solution for mental illness

Euthanasia can never be a solution for mental illness