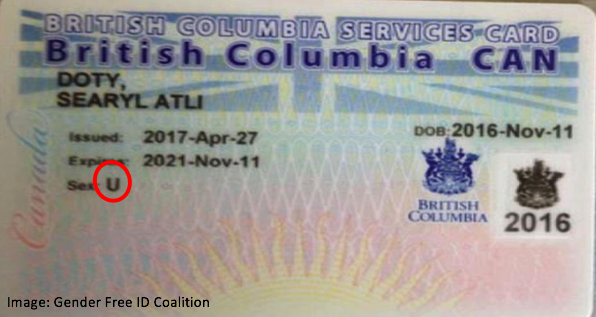 Earlier this month, a baby received the first ever British Columbia health card with no “gender designation”.

Instead of “M” for male or “F” for female, the baby’s health card says “U”, which various media outlets suggest stands for “undetermined” or “unassigned”. “Undetermined” would be a lie, unless the baby was born wearing pants. “Unassigned” might make sense if it referred to the refusal to assign an “M” or “F” to the child’s health card, but unassigned here connotes that sex is just a label assigned to persons – so the “unassigned” child is supposedly a sexless child.

The child’s mother (who calls herself “gender non-binary”) says, “The assignment of sex in this culture is done when a medical person lifts up the legs and looks at the baby’s genitals. But we know that the baby’s own gender identity will not develop for some years until after they’re born.”

“I’m not rushing to apply those types of labels on this kid; right now they’re just a baby,” she says. For some reason, “baby” remains an acceptable label.

Look at your health card. It denotes sex, not gender. Yet CBC, Global, BBC, Time, and other media report that this child is the first with no “gender designation” or “gender marker” on “their” health card. From what I’ve seen, only CNN uses “sex designation”.

The CBC notes that the first “gender neutral” health card comes on the heels of “gender identity and gender expression” being added to B.C.’s Human Rights Code last year and the Canadian Human Rights Act this year. But why is that relevant? Why would identifying a child’s sex amount to discrimination based on gender identity, unless one’s gender corresponds to one’s sex, which is contrary to the new ideological orthodoxy?

The sex designation on a health card is not a political statement. Like age and species, sex is an objective, verifiable, biological reality, and something medical personnel should probably know. Sex is not a reality the state can create or “assign”.

The inevitability of discrimination

The Ontario Human Rights Commission considers the term “sex” in the Human Rights Code “to be related to a person’s biological sex, male or female”, but notes that the term has also been interpreted to include “the social characteristics attributed to sex”, i.e. gender.

You would think that the former, biology, is relevant for the purposes of one’s health card. And you would think that with “gender identity” and “gender expression” added to our human rights laws, the term “sex” should now be interpreted exclusively as denoting biology, since “social characteristics attributed to sex” are now covered by “gender identity and gender expression.”

If, however, gender identity is what counts in law, I would be excluded from the women’s shelter not because I am biologically male but because I “identify” as a man. And if that changed, I’d be allowed in. That is discrimination based on “gender identity”. But either way, there is discrimination. The difference is that discrimination based on sex (for limited purposes) makes sense and is easy to understand. Dividing people into separate locker rooms, showers, washrooms, shelters, dorm rooms, or whatever based on their state of mind is far less straightforward.

Given the present confusion, it’s helpful to reflect on the terms sex and gender. They do not mean exactly the same thing, which is not to say they are separate or vary independently.

Christopher Tollefsen, drawing on John Finnis and Charlotte Witt, defines “gender” as one’s “reproductive role governed by the social norms applied to agents in that role” and the “persona” whereby one “communicates to others some truth or falsehood” about one’s sex. The content of the gender role is a matter of what norms are socially applied to persons in those sexual or reproductive roles. In a healthy culture, says Tollefsen, the social resources necessary to communicate the relevant truths about one’s sexual identity are ready at hand and there is little to tempt one to adopt a different “gender persona” than the one culturally recognized as accompanying one’s sex.

The distinction between sex and gender is useful in explaining the difference between the biological function and the social function. So, although a person is male (an immutable reality), he might socially present as a woman. In this limited sense, it is possible (not ethical) to be “transgender”.

The truths or falsehoods we communicate about our sex, Tollefsen explains, are important because of the “massive significance of the good of marriage and family for personal and social well-being” and because one’s gender or “reproductive role” is “essential to the existence of society.” Tollefsen argues that adopting a trans identity is an assault on the self-evident goods of marriage and society.

It’s a fine argument, I think, though perhaps it’s simpler to say that adopting a trans identity is unhealthy and wrong because it amounts to a rejection of how God made you and is dishonest towards your neighbour. Put positively, we accept our God-given identity as male or female and we express our identities to each other honestly. The biblical prohibition on cross-dressing is, I think, best understood in this light, rather than as some arbitrary or outdated ceremonial law.

Notice that the child’s mother in the health card story is upset that our culture “assigns” sex at birth, even though a baby’s “gender identity” will not develop for some time. Ironically, she and the media reporting the story seem to believe that sex and gender are inseparable—otherwise, identifying a child’s sex would not prevent him/her/zir from adopting whatever “gender identity” he/she/ze wants in the future. Isn’t the claim that denoting a person’s sex on a health card or birth certificate is gender identity discrimination contrary to the idea that sex and gender identity are independent?

But maybe something else is going on here. Maybe, gender identity cannot exist in law as a separate, prohibited ground of discrimination, but must, because of the belief system it is based on, eclipse sex. Sex becomes unimportant, or at least no longer a bodily reality. Sex must become invisible in the law, that “true” identity may be affirmed.

“The idea that human beings are non-bodily persons inhabiting non-personal bodies never quite goes away,” Robert George writes in “Liberal Gnosticism”. Gnosticism, an ancient heresy, “is back with a vengeance, and its followers are legion.” I can offer no better summary than George:

For Gnostics, it was the immaterial, the mental, the affective that ultimately matters. Applied to the human person, this means that the material or bodily is inferior—if not a prison to escape, certainly a mere instrument to be manipulated to serve the goals of the “person,” understood as the spirit or mind or psyche.

Sherif Girgis explains the consequences of this belief in “Obergefell and the New Gnosticism”:

We are subjects of desire and consent, who use bodily equipment for spiritual and emotional expression. […]  Since I am not my body, I might have been born in the wrong one. Because the real me is internal, my sexual identity is just what I sense it to be. The same goes for other valuable aspects of my identity. My essence is what I say and feel that it is.

Contrary to the Gnostic view, George says, Christians believe that the body “is an integral part of the personal reality of the human being.”

As Gnosticism gains cultural traction, people suffer. Children are taught from a young age that they may not be the gender their parents have “labeled” them and more struggle with issues of sexual identity as a result. Pharmacological intervention and surgical mutilation are encouraged and bodies are damaged. The modern state has extensive control over education, health care, workplaces, and family matters, making its embrace of liberal Gnosticism all the more threatening. Note well: a false understanding of human nature leads to bad policy.

The end of the law as we know it?

Jeff Shafer of the Alliance Defending Freedom warns that “draining legal meaning from the body and its natural functions correspondingly drains legal weight from the body-concepts of motherhood, fatherhood, kinship, and ancestry—from family itself.” Transgenderism advocates’ program, Shafer says, is “totalistic, as its ambition is to redefine humanity writ large.”

Christians should care, not only our own sakes, but out of love for God and neighbour. As for the mother mentioned at the outset of this article, I don’t know how she came by the mindset she has today and hope that she comes to know the Lord and gains a healthy understanding of His design for us. The way we respond to an individual’s struggles will differ from how we respond to the legal entrenchment of such folly. We must be bold in calling it what it is.