In the last two blog posts on the financial effects of COVID, I compared the current deficit to past deficits and critiqued government spending in response to government-mandated lockdown. Now it is time to anticipate the future financial impacts of COVID.

The short answer is… no. At least, not yet.

This year’s federal deficit is currently projected to be $343 billion or 15.9% of GDP, although that number will likely grow over 2020. Adding that deficit on top of Canada’s existing debt, the national government’s debt may reach $1.2 trillion by the end of the year. That is an incredible amount of money. By the end of this year, the federal debt will be higher in absolute dollar figures than in any time in history.

But remember, the absolute dollar amount is not the best way to measure the government’s fiscal situation (as I mentioned in my second blog). The debt-to-GDP ratio gives us a better perspective compared to the past. 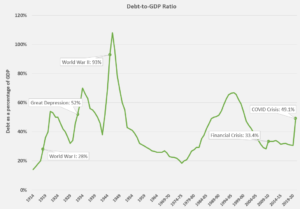 This graph illustrates Canada’s debt levels over the past century using that debt-to-GDP ratio. Here we can see the peaks of debt caused by World War I, the Great Depression, World War II, the Financial Crisis, and the COVID Crisis. In the second blog post, I mentioned that the deficit in the COVID crisis was worse than the First World War, the Great Depression, or the Financial Crisis. It is similar to Canada’s overall level of debt today; although not as bad as during the Great Depression, our federal debt at the end of this year will be higher than at the end of the First World War or the Financial Crisis. This year’s deficit to date has wiped out the improvement in Canada’s finances gained in the past twenty years; twenty years ago, Canada had roughly the same debt-to-GDP ratio as forecasted for this year.

Although not as bad as during the Great Depression, our federal debt at the end of this year will be higher than at the end of the First World War or the Financial Crisis.

Canada is not yet in imminent danger of bankruptcy or default or being unable to repay its debt.

The greater danger to consider is that the debt will continue to grow by hundreds of billions of dollars if the Liberal government’s temporary programs evolve into permanent spending habits. Look back to the graph. See how Canada’s debt still continued to increase after World War I, the Great Depression, and World War II? After an immediate crisis abates, it still takes time for the government to return to a balanced budget. Even after the Financial Crisis (when the federal government’s debt-to-GDP ratio did not really increase after the crisis abated), the Conservative government incurred significant deficits for five years before finally getting back to a balanced budget.

Here’s an analogy. Buying a new house and incurring a mortgage of hundreds of thousands of dollars will take decades to repay and eat up a large chunk of your disposable income. But, the debt from buying a house is manageable and arguably necessary for your family. Your levels of debt become dangerous if you buy a second house the next year, a sports car the year after that, and a 3-month, all-inclusive vacation to Hawaii the year after that. The average person’s finances can survive buying a house, but each successive purchase makes their financial situation increasingly risky.

A similar logic applies to governmental finances. Canada’s finances will survive a single bad year, but every successive year of high deficits inches our country closer and closer to bankruptcy or insolvency.
There is no magic number or tipping point when a nation’s debt becomes so large that it triggers insolvency. Canada’s federal debt-to-GDP ratio is projected to hit 49.1% by the end of 2020. Compared to other developed nations, that is actually relatively low. The United States’ federal debt-to-GDP ratio exceeded 100% even before COVID. Greece’s debt crisis began when its debt-to-GDP ratio was only 127%. Japan’s ratio passed 200% years ago, although policymakers are increasingly concerned about their fiscal stability, monetary policy, and ageing demographics.

The goal or default position of governments should be balanced budgets and slowly repaying the debt incurred in bad times during good economic times. Unfortunately, no major federal political party is urging any genuine fiscal restraint right now, even though economic stewardship is a moral responsibility for governments.

As Christians, we should demand economic stewardship by our government. Although many governments and many people are turning their worlds upside down and worrying about their financial future, Christians know where their daily bread comes from. Let each of us continue to pray, “give us this day our daily bread.” Our sustenance, both tangible and spiritual, ultimately comes from the LORD.

How Should Christians Respond to a Guaranteed Livable Basic Income?