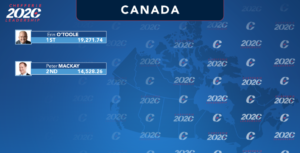 Erin O’Toole is the new leader of the Conservative Party of Canada, having won this post on the final round of voting.

Whether you voted in the leadership race, or identify with another federal political party, or are simply interested in politics, you may be wondering: what does this mean for me? What do the results of the 2020 Conservative leadership race mean for Christians and social conservatives?

To answer that question, we should consider both the man – Erin O’Toole – and the results – the vote count on all three rounds of voting.

O’Toole, a sitting MP in the House of Commons, has touted his experience as an Air Force pilot and former cabinet minister, but what really matters is his personal convictions and what he promises to do as Leader of the Official Opposition and potentially as a future Prime Minister in Canada. On this score, O’Toole should leave many Christians with mixed feelings. In his leadership platform, public speeches, and voting record, he:

O’Toole is lukewarm on issues that Christians and social conservatives care about.

On the whole, O’Toole is lukewarm on issues that Christians and social conservatives care about. Skeptics think that O’Toole spoke about freedom of conscience and religion mainly to woo Christians to rank him second or third on their ballots, but that he does not really have their best interests at heart. Supporters say that, although he may not make progress on social issues, he will at least halt or slow the erosion of Christian values in our society.

Perhaps the more news-worthy or more encouraging outcome of the leadership race is how O’Toole won. He won with the down-ballot support the support of social conservatives.

O’Toole won with the down-ballot support the support of social conservatives.

All Conservative Party of Canada leaders are chosen through a ranked ballot, meaning that a candidate needs to win the support of at least 50% of the ridings in the country. If no candidate passes this threshold on the first ballot, the last-place candidate is eliminated, and his votes are potentially passed along to other candidates.

On the first ballot, social conservatives Derek Sloan and Leslyn Lewis received 14.4% and 20.5% of the vote respectively. (Peter Mackay and Erin O’Toole received 33.5% and 31.6% respectively.) Because he received the lowest vote share, Derek Sloan was eliminated.

On the second ballot, all three candidates were almost tied – O’Toole received 35.2%, Mackay 34.8%, and Lewis 30.0%. About two-thirds of Sloan’s supporters ranked Leslyn Lewis as their second choice and about one fifth named Erin O’Toole as their second choice. She led in the four Western provinces and ranked second in Ontario, the Territories, and three of the Maritime provinces. In fact, Leslyn Lewis had the most votes on the second ballot. But because the leadership race is scored based on how many ridings a candidate wins rather than how many individual votes she receives, Lewis was eliminated on the second ballot.

In fact, Leslyn Lewis had the most votes on the second ballot.

The big story here is that social conservatives, Christians, and Leslyn Lewis in particular made a massive difference in this race. Leslyn Lewis began the race essentially as a political nobody. Over a few months, she defied fundraising and voting intention expectations. She modelled the social conservative cause with clarity, courage, and compassion, a combination that few social conservatives have managed to muster before. She clearly stated her goals – to ban sex-selective abortion, for instance. She courageously repeated these goals in front of all audiences, not just to Christians behind closed doors. And her tone, demeanour, and other policies demonstrated that she had real compassion for people from a variety of backgrounds. These characteristics made her a genuine contender for the votes of conservatives of all stripes.

Lewis has earned a place for the social conservative voice within the Conservative party. A movement and a woman that garners 30-35% of the party base’s support cannot be ignored. Even if the new party leader – O’Toole – is tepid on socially conservative issues, he has to respect the wishes of this engaged minority. Perhaps this will come in the form of positive policy proposals. Perhaps it will take the form of a reprieve from the onslaught of progressivism. Perhaps it will lead to social conservatives being given prominent critic roles or cabinet roles in the future.

Erin O’Toole may not have been the first choice for many Christians and social conservatives. But some of his policy proposals and the strength of the social conservative vote give cause for some optimism. While the party did not correct course, it also did not veer wildly further away from Christian values. For better or worse, the Conservative party will likely resemble the party as it did under Steven Harper and Andrew Scheer.

Although the official leadership result is over, our work is not. For you who identify with the Conservative party, take a few minutes to send an email to Erin O’Toole. Congratulate him on his victory but also remind him of the issues that are closest to your heart. Encourage him to represent the truths of Scripture in his new role. And pray that God will give him wisdom and strength in his new capacity.