On April 5, the Alberta government introduced Bill 9: Protecting Choice for Women Accessing Health Care Act. The bill would create “access zones” around abortion clinics in which it would be illegal to attempt to persuade someone not to get an abortion, to attempt to inform someone about issues related to abortion or alternatives to abortion, or to merely express disapproval of abortion in any way.

Beyond “access zones”, the bill makes it an offence to “persistently request” someone not to provide abortion or to even try dissuading him or her “from becoming a physician who provides abortion services.”

These offences are all punishable by hefty fines and prison.

This is a bad law. It is a betrayal of the most fundamental principles of a free society. It ought to be vigorously opposed, especially by MLAs, who have been entrusted as stewards of Alberta’s democracy. 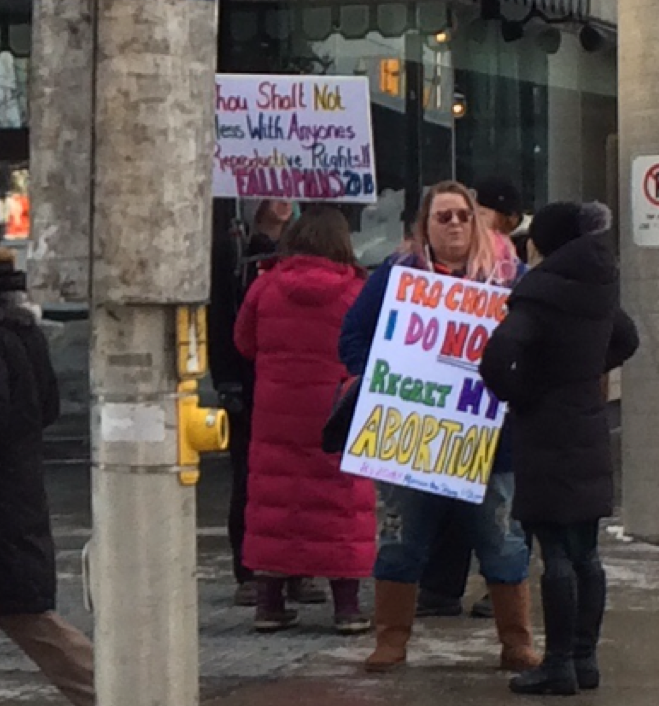 A woman in Ottawa holds a sign within an “access zone”. Remove the word “NOT” and she would be arrested.

Despite the rhetoric about putting a stop to harassment and threatening conduct, this bill is really about censorship. Harassment, intimidation, uttering threats, obstruction, and causing public disturbances are, among other reprehensible actions, already illegal under criminal law. ARPA is strongly opposed to any threatening or intimidating conduct. The way to prevent that is to enforce existing laws. Bill 9 is designed to prohibit peaceful pro-life outreach.

This law is especially unjust and dangerous as a legal precedent because it censors one side of the debate on an important social and moral issue, while permitting the other side to speak freely. As we’ve seen in Ontario, pro-choice activists can demonstrate inside bubble zones.

Pregnant women (and their pre-born children!) deserve better. They deserve to be free to take a pamphlet from a concerned neighbour that informs them about pregnancy care and childcare support. Pre-born children are living members of the human family, and we should be allowed to advocate for them and have an opportunity to offer life-affirming options to women considering abortion.

If you agree take just five minutes right now and send this EasyMail letter to your Alberta MLA, urging them to vote against this unconstitutional piece of legislation.