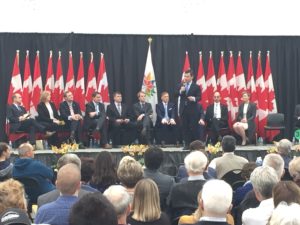 The 14 candidates for the leadership of the Conservative Party of Canada continue to make the rounds, trying to round up votes. We Need a Law director Mike Schouten attended a debate among 12 of those candidates in Langley, BC earlier this month. It was held in a greenhouse that had been converted, essentially, into a theatre. Schouten says only one candidate, Pierre Lemieux, brought up the issue of pre-born human rights. The other candidates, Schouten says, “didn’t bite” on the issue, largely because they had a good sense that the audience was supportive of what Lemieux was saying.

Schouten says both ARPA and WNAL are taking a non-partisan stand. “We’re not going to endorse the Conservatives (and) we’re not going to endorse (leadership) candidates. We endorse the topic of advancing pre-born human rights.” He says when candidates pledge to take on the status quo on the abortion question, “we want people to be aware of that.” Schouten says it’s important for social conservatives to get involved in this leadership debate because the Conservative Party “needs to see that Christians and pro-lifers are not just relevant, but that there are a lot of us in our country.” Schouten says he’s concerned that “there are a lot of Reformed people who aren’t aware that this is an opportunity to get involved.”

Conservatives will pick their new leader in a national mail-in ballot on May 27. In order to be eligible to vote, you have to buy a party membership by March 28.