This fall, Parliament will examine the issue of expanding euthanasia to “mature minors” and to persons with mental illness.

Since 2016 (Bill C-14), Canada has permitted anyone who is at least 18, has a grievous and irremediable medical condition, and whose death is reasonably foreseeable, to receive “medical aid in dying” (MAiD). To put it in stark terms, the law now permits medical professionals to kill their adult patients, as long as the patient consents and has the requisite medical conditions.

In Spring 2015, ARPA released its first Assisted Suicide and Euthanasia report, which offered advice to Parliamentarians on responding to the Carter decision. That report was released prior to Bill C-14 (2016). The bill was not as permissive as we feared it might be, but also not nearly as restrictive as we hoped.

ARPA’s 2015 Report focused on properly understanding and responding to the Carter decision. Now, with Canada growing accustomed to euthanasia and amid demands for its expansion, ARPA is releasing a new Report. It articulates and defends the same basic principles: the sanctity of life, the wrong of deliberate killing, and the good of compassionate caring. 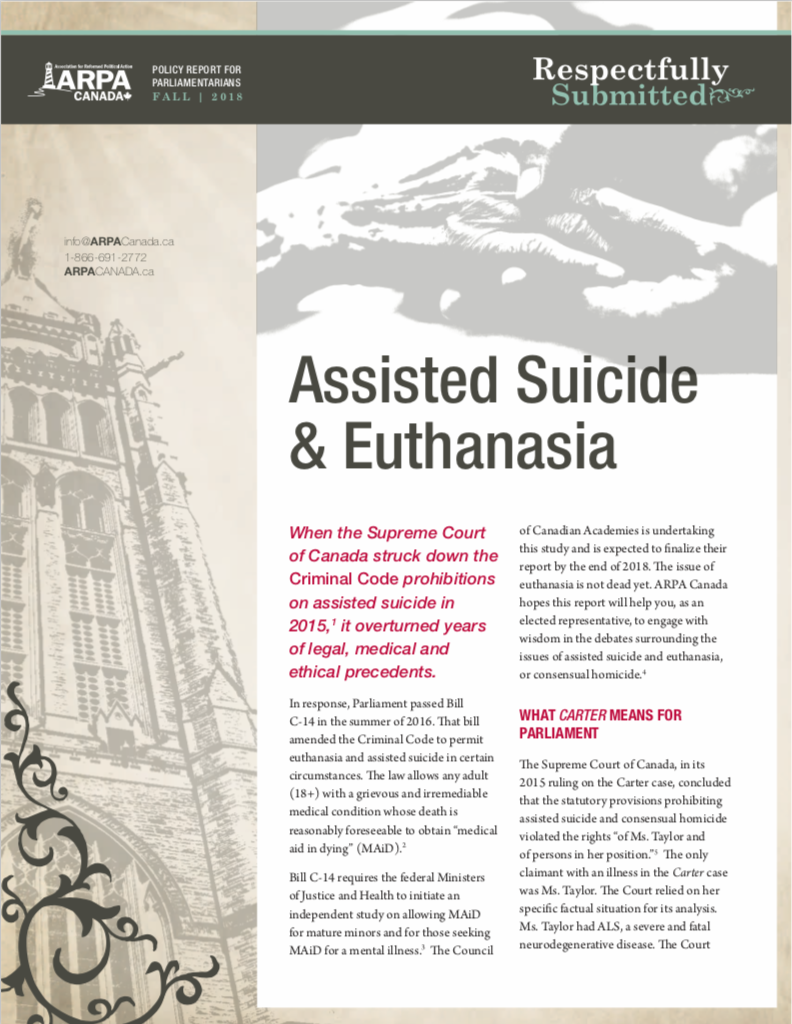 Our new Euthanasia & Assisted Suicide Policy Report (Fall 2018) focuses on the shortfalls of Bill C-14 and anticipates new challenges on the horizon. We reiterate, again, the possibility and propriety of prohibiting euthanasia. But we also offer recommendations for incrementally improving the regime created by Bill C-14.

The current law is vague, granting physicians far too much discretion. For example, the standard that a person’s death be “reasonably foreseeable” is terribly imprecise and its interpretation varies from doctor to doctor.

In every jurisdiction that has legalized MAiD, euthanasia and assisted suicide deaths steadily rise. And the rules are interpreted with increasing flexibility over time by doctors, law enforcement, and judges.

Apart from recommending a new, constitutionally compliant prohibition on MAiD, founded on the objective of guarding the sanctity of life, ARPA urges the government to improve the current law by resolving ambiguity and to establishing robust procedural safeguards.

There is a serious push in Canada to expand MAiD in the near future. We must therefore remain persistent in advocating for policy that recognizes the sanctity of God-given life. We must be thoughtful and compassionate when defending the sanctity of human life. We defend this sanctity not only by opposing the killing of the very sick, but by loving them and those near and dear to them.

Please use ARPA’s new report as a personal and community resource for political advocacy. We invite you to write to and speak to your MP on this issue. For many of you, it will not be the first time. May we encourage you with Galatians 6:9, “And let us not grow weary of doing good, for in due season we will reap, if we do not give up.”