During a recent brainstorming session with ARPA’s Grassroots Manager, our ARPA Chapter came up with the idea of a flower campaign as a way of encouraging elected officials and bringing them a message. At the AGM we enlisted volunteers to sign up for one of the business days in October to carry out this campaign. Each volunteer visited the office of MP 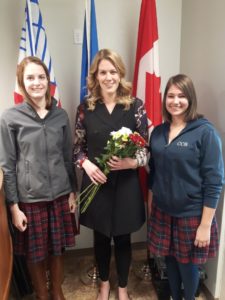 Rachael Harder, MLA Shannon Phillips and MLA Maria Fitzpatrick with flowers and with a handwritten card of thanks and encouragement. A separate group of volunteers went to the office of MLA David Schneider. For Rachael Harder, the messages focused on both thanking her and encouraging her to continue speaking out against sex-selective abortions.

The MLAs were thanked and asked to recognize and honour parental rights in education. (This was before the passing of Bill 24). We had enough volunteers (including a large group of students from Calvin Christian School as shown in the picture) to have flowers and cards delivered each day in October!

We are thankful for the support we received in this campaign! We pray that our messages will have made an impact on these elected officials.