The film HUSH is a must-see for anyone who is concerned about women’s health as it uncovers the truth of long-term health risks related to abortion. What may surprise people is that this film was directed by a woman who describes herself as pro-choice. The film is neither pro-life or pro-choice, but rather pro-information. This is a film that ought to be viewed by anyone who is a woman, loves a woman or knows a woman – so, everyone. 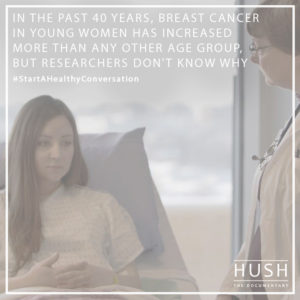 Although the content of the film is troubling, it is presented in a refreshingly, objective way. When the topic of abortion comes up, it tends to evoke a strong emotional response. Rarely is it analyzed from the objective vantage point that we see in this film. The pro-choice film director looks at the connection between abortion and a number of health risks: breast cancer, pre-mature birth, physical effects and psychological problems. I appreciated the director’s willingness to push past the familiar narrative that abortion has no negative long-term health effects and look at the science that supported a different story.

Whether you are pro-choice, pro-life or undecided, this film will provide you with an unbiased look at a difficult question: are women being misled about decisions that can gravely impact their health by the very people they should count on for unbiased information, their healthcare providers?

At our biennial God & Government conference in May, we had the privilege of showing this film to conference delegates and guests. As of July 1, the film is now available for purchase and we encouraged all those in attendance to take this film back to their communities and host a screening. The ARPA London chapter will be hosting a screening in the next month of this film. The film can be purchased for $25 for personal use, for $50 for educational use (for small groups, classrooms, etc.) or starting at $200 for public screenings. You can take up a collection to help offset the costs of the screening and any surplus can be donated to an agency that is doing excellent pro-life work.

Watch the trailer here, shop for the film here and help to start a healthy conversation by clicking here.