For those of us in BC making it out to the capital for the March for Life and surrounding events is no small ordeal. A mother with 4 children that I met up with, started their day with a rude awakening at around 4:30 am to make in to a carpool in Langley and off to the 8am ferry to the Island as the 9 am was booked up well in advance of the march. I was among those privileged to board the 8 am and so had some spare time to explore Victoria a little prior to the prayer service.

Pastor Jason Vander Horst of Surrey Covenant Reformed Church led the service entitling his message “A God of Choice.” Jason explained how God extends his grace despite us. He chooses his people not because of what they have to offer but despite the fact that they have nothing to offer. And so it is with the unborn – though they have little or nothing to offer – God also extends his grace to them and He calls us to therefore love and protect those children – our neighbours – as well.

From the service we walked down to centennial square where the march began with approximately 2000 in attendance. ARPA Langley’s very own Tamara Jansen was the 3rd speaker and as she spoke of the vulnerability of our neighbors young and old the lord reminded us that he is in control – that he can soak us (literally) in his love anytime – and can, with those same raindrops remind us of the millions all over this world who need to be showered in the love of Christ.

For those of us scattered throughout the fraser Valley it may not be easy to take a day off of work or time out of school to join the march in our Capital. But we mustn’t forget where we come from and where we are going – We mustn’t ignore the cries of the helpless – young or old. 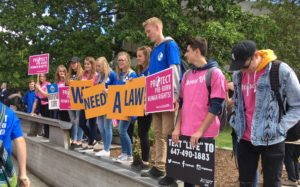 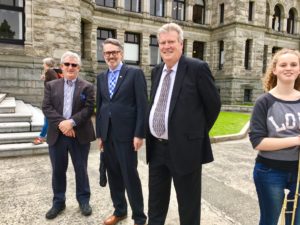