Op-Ed: Opportunity for pro-life and pro-choice to work together lost

The following op-ed appeared in the Smithers Interior News on November 2, 2016 by Executive Director, Mark Penninga

When it comes to how Canadian law views preborn children, some may legitimately wonder if “pro-life” Canadians will ever be able to agree or work together with those who identify as “pro-choice.” Such an opportunity arose just last week, but the entire NDP (including local MP Nathan Cullen), Liberal Party, and even some Conservatives lacked the courage to act. Pro-life or pro-choice, every Canadian should be disappointed with this lack of leadership because it is hurting women and their preborn children. 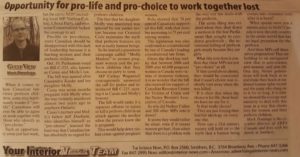 t voted on Bill C-225, also known as Cassie and Molly’s law. The bill was named after Cassandra Kaake and her daughter Molly. Cassie was 7 months pregnant with Molly when she was violently murdered almost two years ago in southern Ontario. Cassie’s partner and Molly’s father Jeff Durham, who identifies himself as “pro-choice”, learned the hard way that Canadian law has absolutely no regard for preborn children. The fact that his daughter Molly was murdered was ignored by our justice system because our Criminal Code maintains the myth that preborn humans are not actually human beings. So he started a grassroots campaign called “Molly Matters” to protect pregnant women and the preborn children that they choose to carry to term.

MP Cathay Wagantall courageously answered the call for justice and introduced Bill C-225, naming it in Cassie and Molly’s honour. The bill would make it a separate offense to injure or kill a preborn child in an attack against the mother, when the person knew she is pregnant. This would help deter violent crime against pregnant women. Polls showed that 70% of Canadians supported this bill, with that number increasing to 75% among women. The legislation was also confirmed as constitutional by one of Canada’s leading constitutional law firms. Given the shocking reality that between 2004 and 2009 over 60,000 pregnant women in Canada were victims of domestic violence, it is no wonder that the bill also received the support of Canadian Resource Centre for Victims of Crime and the Native Women’s Association of Canada.

So why did Nathan Cullen and 208 other MPs vote it down? It seems they would rather be silent, even if it means women get hurt, than admit that there is a problem with the way our law deals with the preborn. The same thing was evident when they shut down a motion in the last Parliament that sought to condemn gendercide – the intentional killing of preborn girls simply because they are girls.

What this vote does is confirm that these MPs are not “pro-choice” at all. If they cared about choice, they would be concerned that Cassie’s choice was violently torn away when she was killed. It is clear that when the choice is for life, these leaders have no use for it. Is that really choice? They are just forcing their hurtful ideology on everyone else.

How can a 21st century society still hold on to the myth that a human being comes into existence only after it is born? What species were you a minute prior to birth? Canada is now the only country in the entire world that has no legal protection for the preborn. And these MPs call themselves progressives! They are holding to an antiquated view that is anti-science, anti-women, and anti-life. One day, future generations will look back at us and shake their heads at our dismal human rights record and the many who clung on to it for so long. It is time we showed the courage and maturity to deal with this issue in a way that shows love for women and their preborn children.