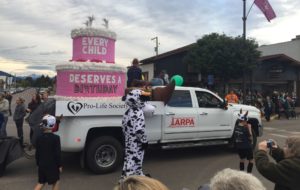 There’s been some pushback against a pro-life float at the Fall Fair parade in Smithers, BC. We told you about the float on Lighthouse News last week; it featured a big cardboard cake with the words “every child deserves a birthday.” The float was well-received at the parade, but there’s been some controversy since then. One woman, who apparently wants to remain anonymous, wrote a letter to Smithers Town Council, demanding that the float be banned from next year’s parade. The letter reads: “A parade is not the time for religion or political statements; it is time for celebration, community, and togetherness…I implore you to invoke a regulation in all future community events prohibiting political or religious statements for the sake of the community.”

The request came to the Town Council meeting last week, but before that happened, local pro-lifers – who had become aware of the request – sent a number of letters of their own to councillors on the issue. They also showed up for the meeting. You can watch the resulting debate online at Mayor Taylor Bachrach’s Facebook page, starting at about the 1:06:00 mark.

In the end, Town Council decided the request was beyond its jurisdiction to grant.

Jessica Vandergaag is part of the pro-life group in Smithers. She says her group’s letters, and the fact that a number of supporters showed up at the Council meeting, are proof that political pressure does get results. “I think having an audience there really made a difference. To show them, ‘We’re watching, you can’t just put stuff through.’” She says Council made the right decision when it comes to jurisdiction, and the next step for her group is to keep up the pressure on the Fall Fair Committee – which actually controls the parade – to ensure the same result.