Rainbow Crosswalk is about Ideology not Diversity 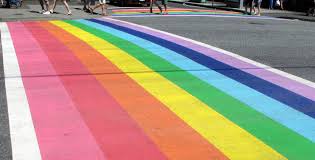 In an effort to celebrate “diversity”, the town council of Smithers, BC recently approved a taxpayer-funded rainbow crosswalk at one of the busiest pedestrian intersections on its Main Street. Ironically, not long after this decision it refused to discuss a motion put forward by citizens to also construct a pro-life crosswalk, in memory of the 100,000 children who have zero legal protection. These decisions have generated numerous letters in the local newspaper. Last week, the town’s mayor Taylor Bachrach was featured as the guest columnist with a lengthy article defending the rainbow crosswalk. This week, the newspaper kindly published a guest editorial by ARPA’s Executive Director in response:

The Rainbow Crosswalk is about Ideology not Diversity

Interior News, November 18 2015, Mark Penninga: In his article entitled “What’s in a rainbow?” Smithers mayor Taylor Bachrach shared his reasons for supporting a rainbow crosswalk on Main Street to celebrate those who identify as LGBTQ. While the desire to treat everyone with dignity and respect is most commendable, Bachrach’s article is a great illustration of how secular efforts to celebrate “diversity” is both an illusion and contradictory.

Mayor Bachrach points to examples in the past century where some people were not treated equally under the law – people of colour, women, and aboriginals. He then links the rainbow crosswalk and the celebration of a diversity of sexual lifestyles to these past wrongs. But the comparison is faulty. Members of the LGBTQ community, like all other born Canadians, are treated equally under the law, also in small towns like Smithers. How somebody views their sexuality won’t affect whether they can vote, what taxes they pay, and what education they receive, among other things. Comparing this to incidents from the past where people were denied basic human rights and freedoms diminishes what these other marginalized groups experienced. As the Mayor admits, this is not about equality, it’s about celebration of a lifestyle.

The reason why I, and many others in the Bulkley Valley, will not join Mayor Bachrach in celebrating “alternative” sexual lifestyles is because I love my neighbours and care when people are being encouraged to be something or do something that is destructive. A 2011 study found that the suicide rate for people undergoing sex “reassignment” surgery was a staggering 19 times greater than the general public. Not long ago the American College of Pediatricians sent a letter to school officials that stated “children with Gender Identity Disorder (when a child desires to be the opposite sex) will typically lose this desire by puberty, if the behaviour is not reinforced… [but] when parents or others allow or encourage a child to behave and be treated as the opposite sex, the confusion is reinforced and the child is conditioned for a life of unnecessary pain and suffering.”

Mayor Bachrach’s argument is also contradictory. The mayor opposed a motion by the public for a pro-life crosswalk. Embryology, genetics and biology prove without a doubt that preborn human beings are unique, living human beings (they don’t magically transition from some other species to human when they leave the birth canal). Yet they are granted zero legal protection in Smithers or anywhere else in Canada. Preborn children aren’t even given the most basic human right – life. The fact that Mayor Bachrach and Council decided that a crosswalk devoted to the plight of preborn humans is not worthy of consideration is a colossal contradiction. It’s another reminder that this debate is really about promoting a particular ideology.

Mayor Bachrach claims the motivation is all about diversity and tolerance, but then makes it clear that diversity and tolerance only apply to those who share his views. He writes that the rainbow crosswalk is “a statement that discrimination or hate based on sexual orientation and gender identity will not be tolerated in our town and on our streets.” In other words, we must celebrate what he celebrates and this crosswalk is a visible reminder of that.

This debate isn’t about tolerance or diversity. If it was, council would have supported both crosswalk proposals. Municipal governments exist to govern, not engage in advocacy efforts for causes of their choice. In this free country, the town should leave it to the citizens to promote their respective beliefs and ideologies.