The last session of God & Government 2016 was not simply a wrap up and a goodbye; with so much 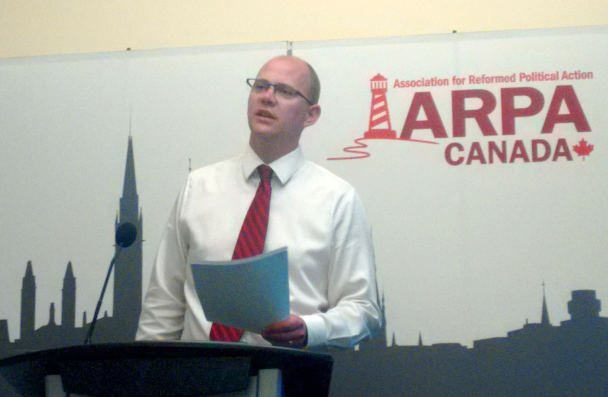 at stake, that simply wouldn’t be enough. On the eve of the March for Life, and as some of the delegates headed home, Executive Director Mark Penninga and Grassroots Director Colin Postma addressed them with a passionate call to action.

Penninga reminded the crowd of how much they’d accomplished during the conference alone; over 50 meetings with MPs and Senators, demonstrating with 6890 baby booties on the Parliament Hill lawn, and taking in a number of informative and educational presentations. What was next? Would it be enough to go home, filled with interesting facts and good stories to tell? No, it was now time to take real action!

Penninga reminded the crowd of what the grassroots had already done, leading up to God & Government 2016; they had seen a former local ARPA board member, Arnold Viersen, elected as member for Peace-River Westlock; they saw a stunning flag display on Parliament Hill, commemorating 100,000 aborted babies and resulting in smaller local displays over the next year and a half, and they saw interventions in key Supreme Court cases by ARPA’s legal team. Penninga urged the delegates not to return home an act, as John Piper called it, like “practical atheists”; men and women who may support certain beliefs, but do not let those beliefs motivate them take action.

Postma continued this theme, reminding the crowd that Christians are never called to give up and say that there is nothing they can do about society’s downward trend. What if William Wilberforce had given up in the face of the relentless opposition he faced? This biblical calling to political action is not about the Conservatives, the Liberals, or the NDP; it’s about engaging the culture and following God’s word.

If delegates don’t know what to do, that’s what ARPA is here for. Postma talked about the new Boots on the Ground initiative that is starting up across Canada, weaving grassroots activism with the legal and policy team in Ottawa. It is about creating, enforcing, and growing political action in a region, not interfering with what is already established. Postma also listed a number of actions the grassroots can take to help make a real difference; sending emails and phone calls to their MPs, mobilizing high school students, writing letters to the editors, and meeting with the representatives at all levels of government. Postma encouraged the delegates to continue building relationships with MPs in all these ways and more.

Although the winds of political change do not always seem to be in our favour, Christians can be encouraged. God has always used people that the world considered to be weak, foolish, and irrelevant to work His will among the nations, and there is no reason that He can’t do that now. The call is to obey, and He will go with us.