Tuesday evening, after a long day of presentations and meetings with members of Parliament, ARPA 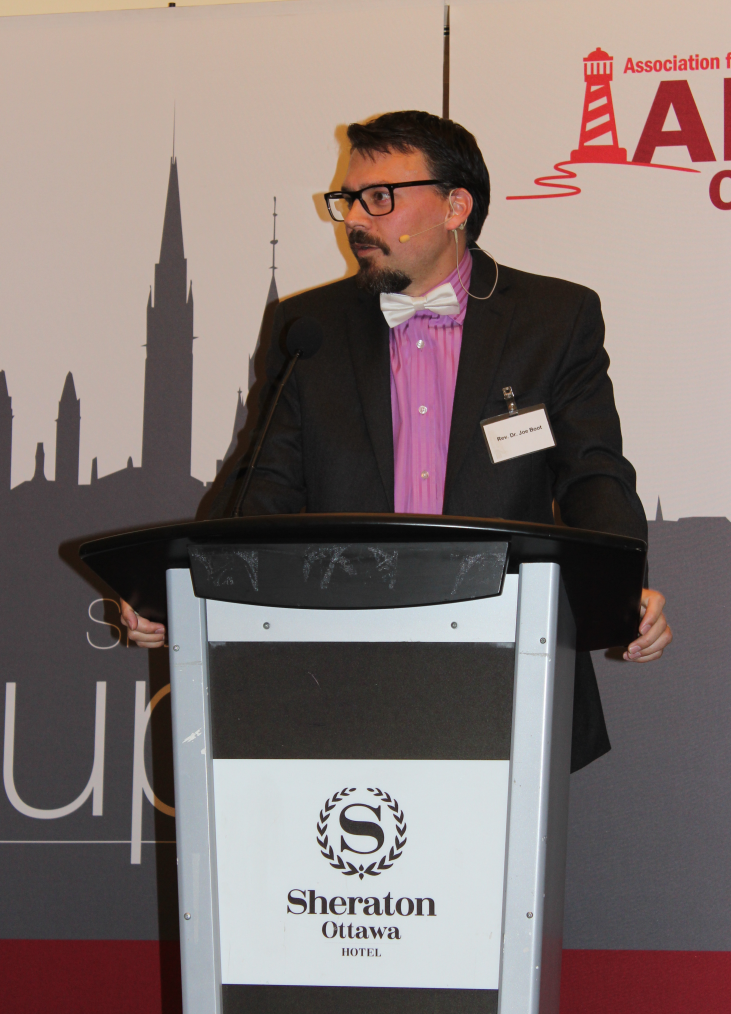 Dr. Boot speaks in Ottawa on the death of man and the crisis of social order at the Tuesday God & Government banquet

delegates were treated to a delectable dinner at the Sheraton hotel. The evening banquet was centred around an address from the Reverend Dr. Joe Boot, senior pastor of the Westminster Chapel in Toronto, founder of the Ezra Institute for Contemporary Christianity, and eminent Christian apologist.

Dr. Boot addressed the breakdown of culture stemming from the rejection of God. He began by defining the identity of mankind; they were created and placed in the Garden as image bearers of God, and it is in this lens alone that they find the fullness of their identity. Man can only be understood relative to God, as His creation and His image bearers. Recognizing that he is not God, man ought accept his limitations in this world; however, this is not what we see today.

The average man has lost sight of God, and denied any higher ideal than himself. This blindness has become meaninglessness; humanity has become dispensable, depersonalized, and adrift. Dr. Boot quoted lyrics from Sting, where the artist was left only with romance as a way of finding meaning:

The result is observable all around us; culture is in the grip of relativism. There is no confidence in human value, no confidence the differences between a man and woman, no basis for differentiation of any kind; Dr. Boot called this the “vortex of democratic insanity”. The negative consequences of this shift cannot be mitigated by government programming or social support; the end of western culture, it appears, is nearing.

The illusion of the “freedom” from God that our culture embraced has left it gripped by sadness, guilt, and despair. Though the people try to ignore God, he is still the present and powerful, and they are still subconsciously, fearfully aware of Him. He is inescapable.

There is no political recovery from this state; there is only personal and national repentance. In the meantime, our nation flounders, paying homage to the state, looking to government for legislative solutions to our moral problems. The cultural sphere of the state has grown, trying to influence all the areas of society that are failing on their own: the family, education, and philosophy.

One of the key beliefs behind abandoning God and “freeing man” is the idea that man is essentially good. If we throw off constraints, we will return to a past state free of inequalities. If we eliminate marriage, no-one will feel subjugated. If we eliminate gender, no-one will feel oppressed. If we embrace radical Islamists, they will conform to society. Dr. Boot called this liberation a “false exodus”. In reality, as man kills himself as God’s image bearer, he languishes in the ruins of social order that cannot be healed by itself. Man can only live fully, freely, and joyfully when he knows God.

Though it may seem like a hopeless state of affairs, the truth is that Christians can be confident of victory in the long run. An apostate culture has no future – it is suicidal. The question is, simply, who will remain faithful to rebuild in the time of God’s mercy and remembrance? Dr. Boot expressed his admiration and gratefulness for the work of ARPA, calling it the vanguard of the true political reality, one that faithfully defends God’s truths in a hostile political arena.

Dr. Boot reminded delegates that in the end, Jesus assures us that the hour is coming where the dead shall hear the voice of God, and those who hear shall live. The message of central importance, in the midst of social and political chaos, is and will always be that Jesus Christ is our life and our hope.