Does the prospect of swimming against the political tide in Canada intimidate you? Have you ever 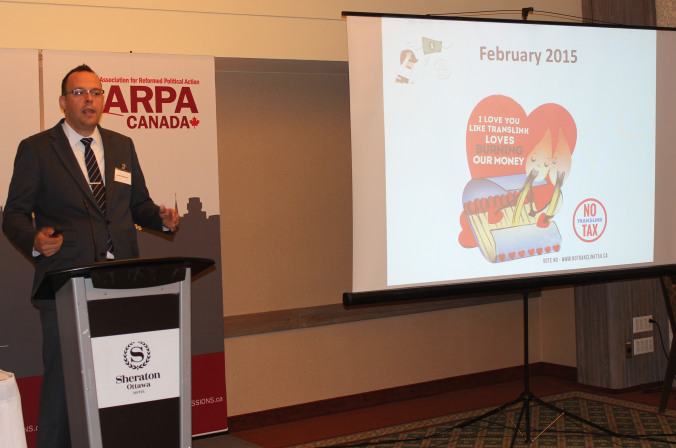 felt like the metaphorical David, armed with little power and few resources, facing the Goliath of secular culture and its many allies? Many attendees at God & Government 2016 have undoubtedly felt like this during at least some point in their political activism. On Wednesday morning, God & Government attendees were privileged and encouraged to hear Jordan Bateman of the Canadian Taxpayers Federation (CTF) tell the story of their “David and Goliath” victory over a proposed transit tax in the Vancouver municipality.

Translink, Vancouver’s regional transportation authority, receives 1.4B in municipal taxes, and in 2014 they wanted more. Jordan Bateman, in his work with the Canadian Taxpayers Federation, had already exposed TransLink as a wasteful organization, documenting their excesses, inefficiencies, and inability manage money; his work had made the TransLink brand toxic. As a result, Premier Christy Clark had declared in her 2013 campaign that a re-elected Liberal government would not allow any new municipal taxes without a referendum.

When TransLink asked for 7.5 billion in new taxes in 2014, triggering a referendum, their campaign looked invincible. All of the region’s mayors, unions, city chambers, and boards of trade, in short, the political elite, were on the Yes side. Businesses and NGOs largely supported TransLink as well. The first poll put the Yes campaign 14 points ahead. However, in June 2015, voters resoundingly rejected the proposal. The Yes side had spent over 7 billion; the No side, $40,000. How was this possible?

Bateman outlined some of the strategies that his campaign used to bring the No side to victory. In the beginning, they planned ahead, carefully laying the groundwork to win while the other side complained about the need for a referendum. Bateman hired a campaign manager, Hamish Marshall, and framed the ballot question: “TransLink has wasted too much of our money to be trusted with more of our taxes”. They stuck to this message with tenacity, and directed it carefully; they discerned who needed to hear their message the most, and then targeted drivers, not transit users, with traffic radio ads. They were disciplined; they banned certain terms favourable to the Yes side, (abandoning “transit” and only using “TransLink”) and kept their messaging simple and concise.

Bateman presented the concept of a campaign needing a “Sword and Shield”; that is, a defensive message and an offensive message. His “shield” was an alternate plan to pay for the proposed expansions; the No side hired an accountant to demonstrate that the plan could be paid for through efficiencies and future growth. Instead of simply attacking the new plan as wasteful, he could parry with the opposition with his “Better Plan”.

The No side was creative; they created waste pickup calendars with their campaign messaging on them, and distributed them widely; their creative gimmicks and brazen opposition earned them media that they couldn’t afford otherwise, allowing them to compete with the deep pockets of the Yes campaign. As Bateman said, they “Donald Trump’d” it, referring to the US presidential candidate’s ability to attract media attention. In the end, they stunned the Yes campaign and the political elite with a resounding, 61% victory in the plebiscite.

The ARPA grassroots might not find itself in a city-wide campaign against transit taxes any time soon; the practical and strategic lessons learned from Jordan Bateman and the No campaign, however, are widely applicable to the many initiatives the grassroots is constantly undertaking. As we look to conservative movements across Canada, we can emulate their successes, learn from their failures, and work together to make Canada a better country.