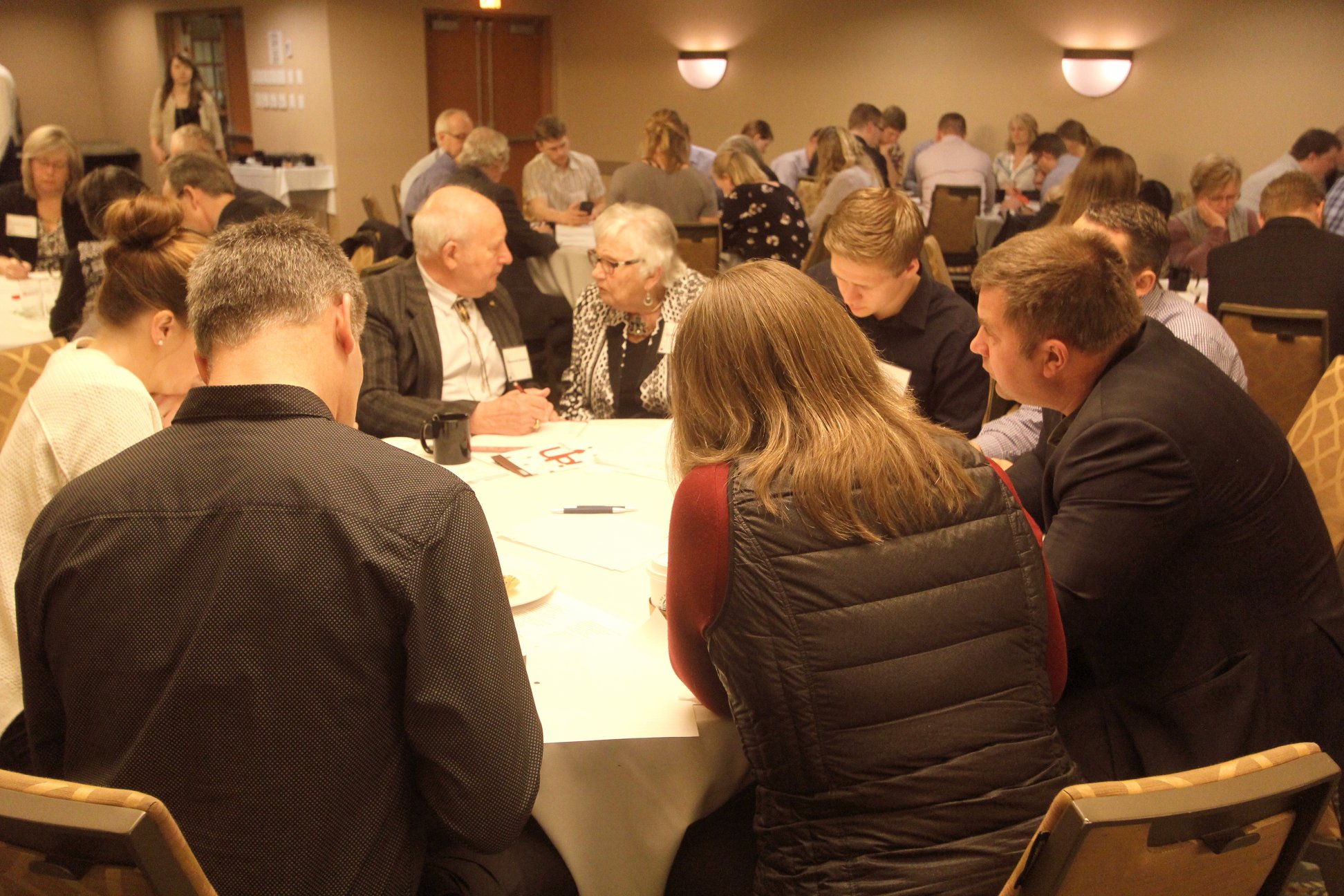 The third day of non-partisan Parliament Hill advocacy at ARPA’s God & Government conference began with a meditation by Dr. Ted Van Raalte, Professor of Ecclesiology at the Canadian Reformed Theological Seminary in Hamilton. Delegates were directed to 1 Timothy 6:11-21, 2 Timothy 3:10-17 and the commission of the man of God.

The messengers of Christ, either in the ordained office of the ministry of the Word and Sacraments in the proclamation of the Gospel, or in the offices of Prophet, Priest and King in the witness of the Gospel in the public square, are called to reliance on the inspired Word of God, asserting the claim of Christ over every earthly authority, thoroughly equipped for every good work.

To the inspirational exhortation to Kingdom service, delegates responded by singing the Reformational anthem, ‘A Mighty Fortress is Our God’.

Following the opening meditation, grassroots manager, Colin Postma, led a brainstorming session in which delegates were tasked with developing action plans for faith-based advocacy and community engagement at local levels of municipal, provincial and federal government.

Rev. Pieter van der Hoek, Pastor of the Heritage Reformed Congregation of Burgessville, concluded the session in prayer, directing delegates to Ephesians 6:10-18 and the whole armour of God.  The assembly was called to put on the armour of God in the spiritual battle against principalities and powers, to stand for truth with courage, clarity and conviction.

Barbara Shipley, a member of the Parliamentary Spouses Association and wife of Conservative Member of Parliament for Lambton-Kent-Middlesex Bev Shipley, addressed delegates over lunch. She documented, with humour and grace, the life of a spouse of a Member of Parliament. An active and engaged spouse, Shipley noted the importance of prayer and supportive care of elected representatives in their role as legislators in the House of Commons and public figures in the community, as well as the importance of an eternal perspective on Parliament Hill.

Following the address, Daniel Gilman, a spokesperson with Strength to Fight and a key leader in the national fight against addiction to pornography, addressed delegates, noting an important conference on sexual addiction: Strong and Free: Reversing the Effects of Pornography on Our Lives, Homes and Communities, scheduled Friday, May 25 and Saturday, May 26.

The luncheon was followed by a number of exit seminars, held in the Rideau Room, as well as national offices of ARPA Canada. Mark Penninga left delegates with a $20 challenge on publishing a letter to the editor, with lots of tips for success. Bruce deBoer walked delegates through phoning up your Member of Parliament, including a demonstration of how it’s done. Colin Postma and Mike Schouten met with delegates in small groups to engage on how ARPA can better assist with action on the ground. And lawyers John Sikkema, André Schutten and Tabitha Ewert gave updates on political dangers and opportunities happening at the provincial level in Ontario, Alberta and British Columbia.

After these snappy workshops, Executive Director Mark Penninga, closed the event in prayer and thanksgiving, directing delegates to Hebrews 11:39 and great cloud of witnesses. Citing Lord’s Day 12 of the Heidelberg Catechism, delegates were called to renewed advocacy and Kingdom citizenship, in the anointed offices of Prophets, Priests and Kings, the assembly responding by singing the expectant hymn, ‘Come, Lord Jesus! Maranatha!’.

All in all, and by the extravagant grace of God, the conference was a resounding success! ARPA Canada rejoices in that fact and gives glory to the Father. The staff and board look forward to hosting another conference with even more delegates in 2020, the Lord willing.