A Legal Void on Euthanasia 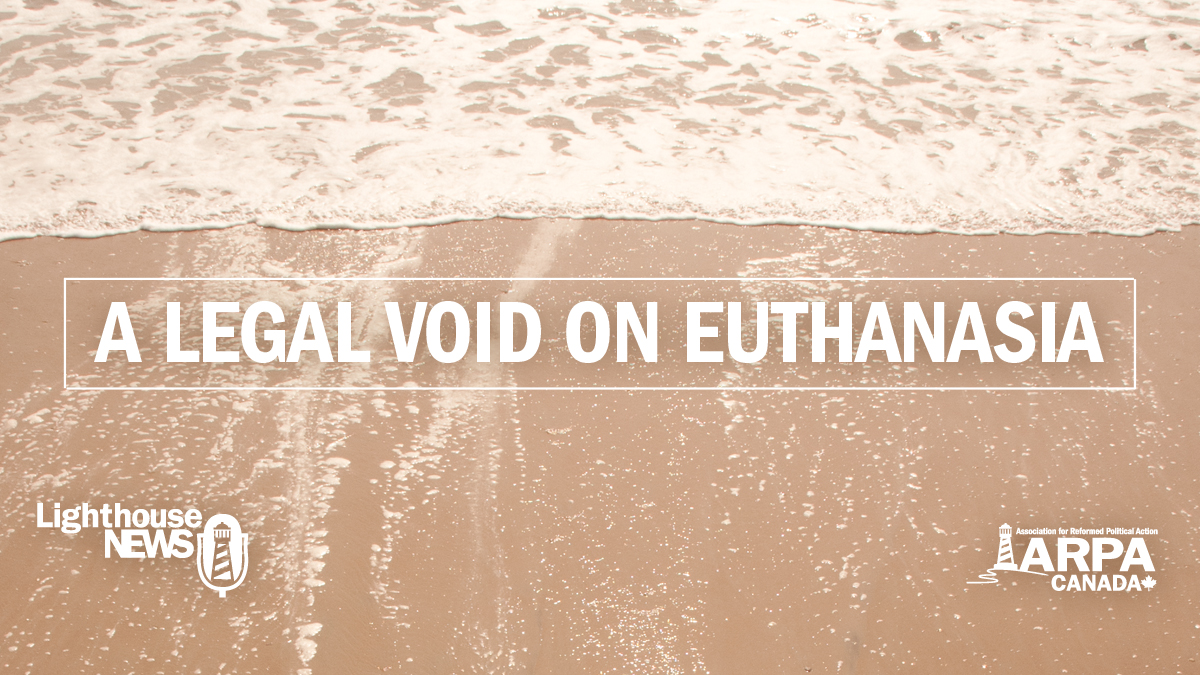 The House of Commons is due to vote this week on Bill C-14, the government’s response to the Carter decision on doctor-assisted suicide. But even if it passes the House this week, many observers expect the government will miss a June 6th deadline to pass a new law. On the feature today, an interview with ARPA Canada lawyer André Schutten on what will happen if the deadline is missed.

In the news, some in-depth analysis of the Conservative Party of Canada convention in Vancouver last week.

And ARPA Canada is back in court later this week in defence of Trinity Western University.

Al Siebring: The vote is expected this week on Bill C-14. The house was adjourned last week because both of the major parties had conventions, the Conservatives in Vancouver and the Liberals in Winnipeg, but now they’re back at it again. There’s a good chance though that this bill may not become law before the deadline set by the Supreme Court of Canada. I’ve got Andre Schutten on the line with me. Andre welcome back to the program.

Andre Schouten: Thanks for having me back Al.

Al: So on what basis are we thinking that this deadline is going to be missed. There was a senate report a week and a half ago that is causing some doubts about this.

Andre: So the Senate is sending signals that unless certain changes are in Bill C-14 when it comes to the Senate, then they themselves will revise it, and if the Senate revises the bill then it must go back to the House of Commons again for another vote before it can be passed into law. So just looking at the Parliamentary calendar, it is likely that the Senate’s going to take some time yet to review the bill. Probably not too long, because they have done some pre-study on it, but they’ll take some time to go through the process They’ve got to do the three votes, the first reading, second reading, the committee stage and the final vote and if they do make changes -which is a real possibility judging by the strength of the report that they’ve done – in the meantime then it has to go back to the House of Commons and if by that time the House of Commons is done sitting for the summer there’s a good chance that we will not see this legislation pass until September.

Al: So where does that leave us then? The Carter decision that was released a year and a half ago now, effectively becomes the law of the land in the absence of any bill? This is what happened with the abortion question in a different way we have no law at all. In this case we would have a law but it would be the nuts and bolts of the Carter decision, correct?

Andre: Yeah, exactly. I’ve heard many people, including many lawyers say that if we don’t have a law passed by June 6, which is the magical date at which the Supreme Court of Canada expects Parliament to have a new law passed and introduced, then it is going to be just like what we have with abortion, but that is not true. It will be similar to the abortion situation in the sense that the law of the land will be as the Supreme Court has made it. Back in the abortion context, back in 1988 the Supreme Court struck out any laws protecting pre-born human rights so that an entire class of human beings had absolutely no legal protection or legal recognition. So that means any human being before birth was not protected or even recognized in law. And so we had a total open season on the pre-born, so to speak; that’s not the case here. With euthanasia, yes we will have no law against assisted suicide as such, but there are constraints that the Supreme Court built into their judgment. So that law was only struck down, a better term would be that that law was only read down, because the law is not totally gone, it is only gone as it relates to a doctor who is assisting someone with a grievous and irremediable medical condition that’s causing them enduring suffering. So its limited in that sense. I would agree with other pro-life lawyers who say that if this were the same as the abortion question than we would have seen the Supreme Court say anyone over the age of 75 has no more legal protections at all. Anyone can dispose of a 75 plus person as they see fit. That would be more analogous to the abortion question. That is not at all the case here, it is much more limited, but yes the Carter decision is now the law of the land or will be June 6, if no law is passed.

Al: So fundamentally the discussion we had, and I referenced it on the program last week, some say the Carter decision is actually better in terms of protections of life than the Bill C-14 that’s being proposed. Others say Bill C-14 is better than nothing. Where do we come down on that?

Andre: It’s a little bit of both if I could be a fence sitter Al. Actually Life Canada and other pro-life educational organizations in Canada put together a helpful document where they’ve compared a number of different safeguard or requirements or conditions and compare Carter the Supreme Court decision with Bill C-14 in its first stage, its first edition. And, if you go down that list you will be able to see that there are some safeguards that Carter has that seem overlooked or expanded on in Bill C-14 and vice versa. For example, Carter is very clear that is is for adults. Bill C-14 contemplated eventually expanding to children. On the other side, C-14 requires two doctors to sign off whereas Carter doesn’t. C-14 requires a waiting period, Carter doesn’t. C-14 requires informed consent so that there is asked to be a written noticed signed by the patient. So there are some safeguards that are built into C-14 that are stronger than the Carter decision. So I wouldn’t say there is an easy answer to that kind of question, I think there’s pros and cons, if I can put it that way to both, but the reality is when we step back from it all and look at it from a firmer foundation, from an objective basis, from the basis of God’s Word and what is right and wrong both are bad. Both say that we as a society can kill people who are living live that we think are not worth living, and I think that is what we have to keep in mind here.

Al: A couple of other things. The provinces, pretty much all of them have now written regulations on how this will be administered. They vary a little bit across the board. And there was a court ruling in Alberta last week as well which already struck down the guidelines that the Alberta government was trying to propose, saying that it’s not loose enough. I mean, this whole thing seems to be a moving target.

Andre: Well absolutely Al and this is what exactly we predicted from day one. There’s not a jurisdiction in the entire world that has legalized assisted suicide and have not seen it expand. I think that the lawyers that were challenging our assisted-suicide prohibitions in court knew this. They knew if they could just get the nose of the camel in the door, it would be within a very short amount of time wide open in this country, When we sat in the Supreme Court and I listened to the oral arguments of the lawyer for Carter, the lawyers advocating for the law to be struck down, they kept on insisting that its just for these most extreme cases, just for those who are suffering this horrific way, just for adults, just for those who were terminal, just for those who really, really needed it in the last moments of their lives so they could end well, so to speak. They were very emphatic in their oral arguments that it was just for this exceptionally small amount of people. And yet, those same lawyers, the lawyers for the BC Civil Liberties Association which is the group that really pushed this all, they are now saying that these new laws that we are seeing in the Provinces, that we are seeing from the Federal government, C-14, they are just not wide open enough, we’ve got to expand it more. And in fact we are even seeing some organizations like Dying with Dignity arguing that we should actually strike down C-14, vote it down because it’s just not wide open enough, and now we have the Alberta Court of Appeal just rule that extreme forms of psychological suffering also should be included as a reason for assisted suicide, even though C-14, the draft anyway says that it should not be. So this is the slippery slope; it’s not a fallacy of argument. This is the slippery slope of one condition following another necessarily and we saw this coming, we warned about this and we are seeing it happen right before our eyes.