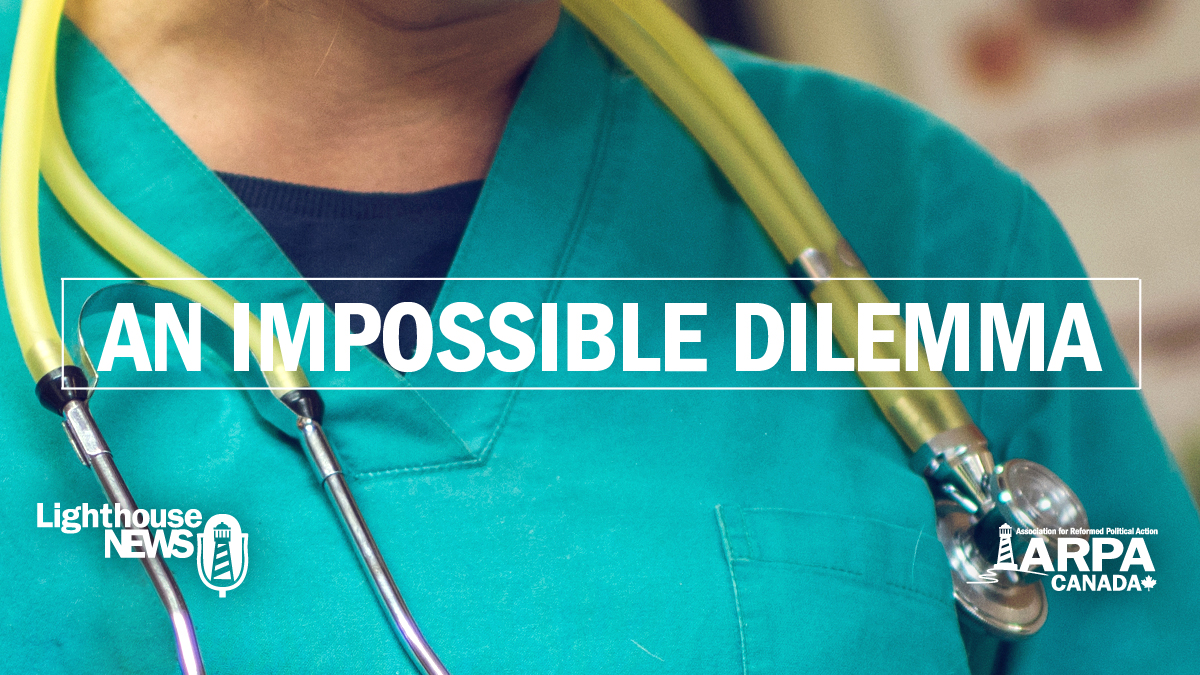 Feature:  This week, we have a conversation with Larry Worthen from the Christian Medical and Dental Society of Canada, on testimony he gave to a Committee of the Ontario Legislature last week regarding conscience protection for doctors.

Informing parents about their own kids “extreme” says Alberta education minister:  The rhetoric is heating up in the dispute over parental rights in Alberta.

Euthanasia happening without regulations in Canada:  ARPA Canada has launched an EasyMail campaign to push for new federal regulations on MAiD.

Conservative leadership candidates talk pre-born human rights: Life issues have come up again in the context of the federal Conservative Leadership race, and you’ll be surprised at who’s raising them.

The real genetic discrimination no one is talking about:  Some perspective this week on Parliament’s recent passage of a bill to outlaw “genetic profiling”.

It’s only been a few weeks since Jason Kenney was elected as leader of the Alberta PC Party and already the debate over parental rights in that province has heated up. Kenney had a meeting with the Post Media editorial board last week, in which he made the case that the government’s current policy on so-called “Gay Straight Alliances” (GSA clubs) might need to be revisited. Specifically, Kenney objected to the notion that schools are not supposed to communicate with parents if their children express same-sex attractions or gender dysphoria; that this information was to be considered confidential.

Here’s what he said, quoted from a transcript of the interview. “I think that parents have a right to know what’s going on with their kids in the schools unless the parents are abusive, in which case there are protocols to deal with bad parents. I don’t think it’s right to keep secrets from parents about challenges their kids are going through. The…education system should be predicated on the presumption that the vast majority of parents are good, loving, caring people who have the best interests of their children at heart.”

Within 24 hours, Alberta’s Education Minister, David Eggen, was calling out Mr. Kenney’s position on the issue, telling reporters that the new PC leader has shown himself as being “quite extreme.”

Reaction to that statement has been swift. Donna Trimble with the group Parents for Choice in Education says she feels like she’s “living in a Monty Python sketch,” because it’s actually the government’s position that is extreme. “The government of Alberta paid for and continues to recommend the Alberta GSA Network to children. (This is a website) that gave them access to sexually graphic materials. And yet (Jason) Kenney – who wants parents to simply know that their children are receiving this care in schools – is called the extremist.”

ARPA Education Consultant Harry Moes has also been watching this situation, and he says Kenney’s position seems reasonable. “For almost all programs in a public or independent school, parental permission is required. (If you’re) a member of a school basketball team (or) a school band, when you’re going on an excursion – it doesn’t matter what the situation is – parents always need to be informed about the activities in which their children are involved.” Which begs the question, Moes says, of why involvement in GSA clubs should be automatically excluded. He says Kenney is “speaking the language” of the majority of the citizens of Alberta, and that his position “resonates” with the rank and file of Albertans.

While Kenney has indicated he’s not prepared to scrap Bill 10 altogether, Moes says the hope is that there might be some room for specific amendments on the issue of parental rights.

Euthanasia happening without regulations in Canada

ARPA Canada is launching a campaign for better reporting and regulations around doctor-assisted suicide. Bill C-14, which legalized the practice last year, envisioned that MAiD would include some regulation. But the way the bill is worded is a bit unusual. It says the Health Minister “must make regulations that he or she considers necessary” on the issue.

Those rules are supposed to take effect by June, but ARPA lawyer John Sikkema says the notion that the minister can decide whether or not the regulations are “considered necessary” is a very unusual proviso in the law. “I did some research just to look for that phrasing – or something close to that phrasing – in other statutes. You don’t find it.” Now, Sikkema says, we’ll have to wait until June to see if the Minister does “consider it necessary”.

Sikkema says ARPA is launching an EasyMail campaign on the issue. He says you’re being asked to remind MPs that the Supreme Court called for the regulations when it legalized assisted suicide. You can read more of ARPA’s analysis and access the EasyMail campaign here.

Life issues have hit the radar in the federal Conservative Party leadership race again, and this time, from an unusual source. Candidate Rick Peterson, who has clearly identified himself as pro-choice, sent out an email this week expressly courting pro-life voters. We Need a Law’s Mike Schouten says the content was a surprise. “I think what was most surprising was that he said ‘In line with the Party platform, I will support and prioritize comprehensive legislation making it criminal to use abortion as a means to discriminate against female fetuses.’” He says Peterson’s policy position is the “direct result of the work that (the pro-life movement) did in 2013 to ensure that the Conservative Party had this as part of their platform.” He says Peterson’s position is the fruit of that work, coming from “unlikely sources.”

Schouten isn’t sure whether Peterson’s email will garner him more support among social conservatives, but it definitely shows that they are being taken seriously.

The real genetic discrimination no one is talking about

Something unusual happened in Parliament last month. More than 100 Liberal MPs defied their leader, Prime Minister Justin Trudeau, and voted in favour of a bill that had originated in the Senate. Bill S-201 would disallow what’s called “genetic profiling”. ARPA’s Director of Law and Policy, André Schutten, says the goal is to make sure that genetic testing can’t be required in applications for employment or life insurance policies. He says under this law, “a life insurance policy, or a health policy, or an employment contract cannot be jeopardized by someone having knowledge of their own genetic testing which may or may not contain information that would jeopardize their life or their health or their employment.”

Schutten says the government may be “patting itself on the back for being ‘human rights warriors’, (but) I’m calling them out on it.”

Andre has written a blog piece on the issue, which you can access here.

On the feature this week, we have Larry Worthen from the Christian Medical and Dental Society of Canada. Mr. Worthen gave testimony last week to the Standing Committee on Finance & Economic Affairs at the Ontario Legislature. The Committee is considering Bill 84, a law that would impose some regulations on the provision of Medical Assistance in Dying (MAiD) in the Ontario context, and Worthen’s submission to the Committee centred on the need for “conscience protections” for medical professionals as part of those regulations.

LN: First of all, what’s the status of conscience protection in Ontario? What’s the broader context here in which the Committee was holding its hearings?

LW: Well of course we have Constitutional protections under the Charter of Rights and Freedoms, but unfortunately the College of Physicians and Surgeons in Ontario has a policy requiring “effective referral” for controversial services like medical aid in dying and abortion.

LN: I read through some of the literature and the history on this. Is it true that Canada is the only jurisdiction in the world that wants to compel physicians to do the referrals for things like MAiD?

LW: That’s absolutely right. No other jurisdiction that allows medical assistance in dying requires physicians to make an “effective referral”.

LN: So what was the gist of your presentation to the Committee?

LW: Well essentially, I tried to explain that for doctors who are committed to the lives of their patients, it’s practically – well it is impossible for them – to be able to contemplate being a cause of the death of their patients. They’ve just seen too many patients who want to die be treated, have a meaningful quality of life afterwards, and they just cannot bring themselves to be the ones to close the book on (their) patients’ life.

LN: So is there a Constitutional issue at play here in terms of the whole freedom of conscience piece? I mean, ultimately, is this going to end up in court on that basis?

LW: We’re already in court. Five physicians in Ontario, as well as three physicians’ organizations, have challenged the College policy on the grounds that it is not constitutional. That it breaches Section 2 of the Charter, which protects freedom of conscience and religion.

LN: So, in the specific context of Bill 84, do you have any idea how the government’s going to respond? The issue of conscience protections isn’t actually covered in the legislation, and there doesn’t seem to be a lot of interest in putting it in there. One person who’s been following this has told me that “conscience protections are simply beyond the scope of Bill 84 because the bill doesn’t actually require physicians to participate.” Any thoughts on that?

LW: Well, because we’ve got this threat from the College of Physicians and Surgeons, we feel that this is the only place for this legislation. We need protection from this College, and it’s up to the Legislature of Ontario to provide that protection.

Now the legislation, by the way, protects doctors who are going to provide medical assistance in dying. Why should it not also protect doctors who have conscientious objections to this?

LN: Any idea in terms of process where it goes from here? What happens when the Committee finishes the study? Will Bill 84 be law by summer? Any chance of any amendments? What’s your read on it?

LW: Right now it’s hard to say. We know that there will be an amendment coming from the Conservatives. The NDP seem very sensitive to this issue. It’s really the Liberal government that we’re concerned about. They just seem to be not open to providing us with the support that we’re looking for. The final decision will be made by the Committee on April 11th.

What do the results of the 2020 Conservative leadership race mean for Christians and social conservatives?
By using our site, you acknowledge that you have read and understand our Cookie & Privacy Policy