Bigotry in the Senate? 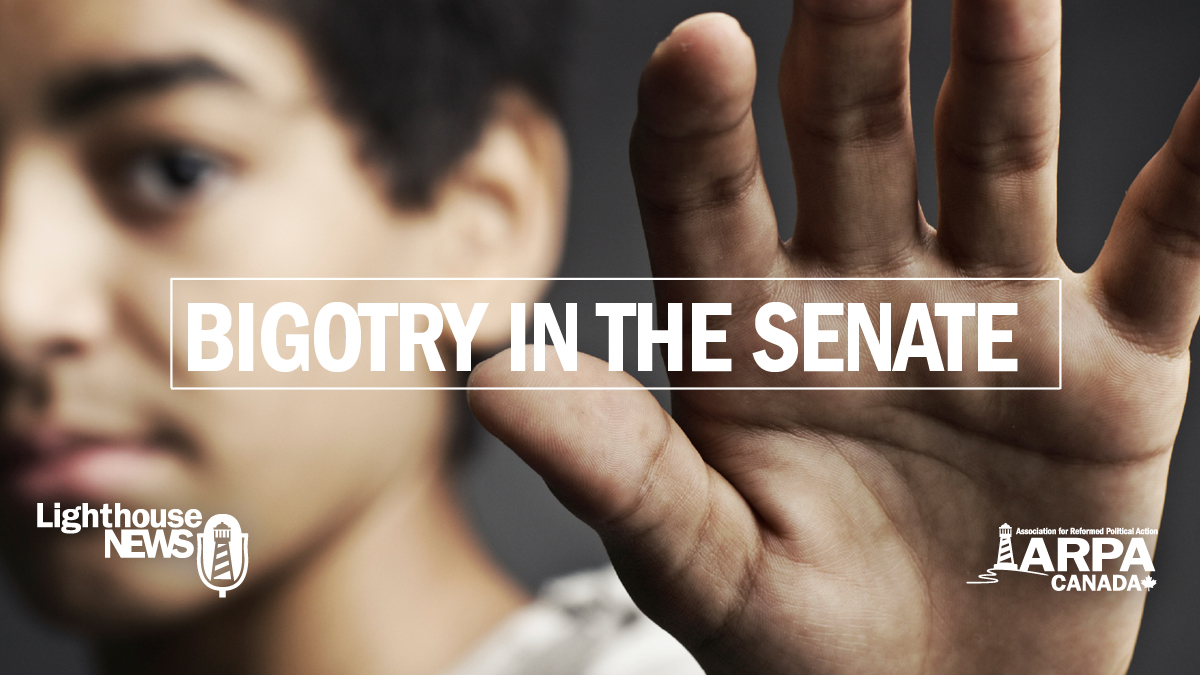 An accusation of bigotry – On the feature this week, we listen in on an emotional debate from the floor of the Senate, after one of the Senators was accused of bigotry for speaking out on trans-gender issues. Click here to read the transcript of the debate.

M-103 – The “anti-Islamophobia” motion had its first round of debate in Parliament last week. Click here for more on this motion and the opposition’s response.

Pre-born Human Rights – ARPA staff have been getting some training in pro-life apologetics. Click here for more from ARPA’s Hannah Sikkema.

Education Tax Breaks – Finances for independent and home-schooling families have hit the federal Conservative leadership race. Click here to learn which candidates have come out strongly in support of parental choice in education.

A controversial motion which, if passed, will have the House of Commons Heritage Committee study the issue of religious discrimination – specifically including the term “Islamophobia” – had its first hour of debate in the House of Commons last week. There has been increasing opposition to the motion, largely because of fears that it will restrict criticism of a specific religion, and because the term “Islamophobia” remains undefined. The Conservative caucus drafted a motion of their own, which was similar but contained some important distinctions.

Reid said the distinction is important, because by specifying Islam by name, Motion 103 “implies that what Canada needs is state protection for faiths rather than for the safety of the faithful.” However, he said, “it is the faithful who must be protected rather than the faiths they profess, since eternal truth is under the protection of an almighty and all-loving protector far more powerful than the Government of Canada.”

The issue will come back for a vote in April.

Three ARPA staff members were in Florida last week for the annual “Genocide Awareness Project”. It features a tour of a large visual display with abortion victim photography. A group of individuals engaged university students on three different campuses around Florida on the issue of pre-born human rights. The event was organized by the Canadian Centre for Bio-Ethical Reform¸ and ARPA’s Ottawa Administrative Assistant, Hannah Sikkema, was part of the project. She says a lot of people don’t know “what abortion really is. They think it’s just a medical procedure…but we’re showing that what it really does is kill children.”

Sikkema says the training was also invaluable, including strategies to engage undecided and pro-choice people.

ARPA’s Director of Law and Policy, André Schutten, was also part of the tour. He says the week reminded staff of what’s at stake in the abortion debate, calling it a powerful, draining, and rewarding exercise.

One of the candidates for the leadership of the federal Conservative Party is proposing tax breaks for families who educate their children outside of the public school system. Andrew Scheer unveiled a policy position last week, promising tuition tax credits of up to four thousand dollars per child for families who have children in independent schools, and one thousand dollars per child for home-schooling families. Scheer says this is a logical extension of existing federal policy which provides some tax relief to parents who pay post-secondary education tuition for their children, and he says the proposal also acknowledges the positive impact of alternative forms of education. “When you think about it, families who either home-school their children or send them to an independent school are really helping the public system. The parents pay the taxes to support the public system, but the child does not attend, so there’s extra resources going into the system that (these) children are not picking up.” He says if every family who currently homeschools or uses independent schools were to put their children into the public school system, there would be a “massive drain” on the public system, and “likely tax increases to pay for it.” 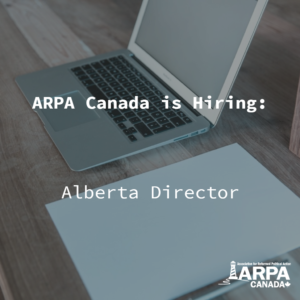 ARPA Canada is hiring again. A call went out last week for the position of “Alberta Director.” Executive Director Mark Penninga says the organization has long been aware of the need for an “increasing presence” in Alberta, especially with the recent challenges in the education system there.

As to the particulars of the job, Penninga says they envision it being about 60% grassroots engagement, building relationships with churches, schools, and local ARPA chapters. “The other large component of the job,” Penninga says, will involve “going directly to the Alberta government, lobbying, sitting down with public office-holders, and building relationships for long-term engagement and long-term change.”

If you know of anyone who might fit the bill for this job, the details are up on the ARPA website. Applications will be accepted until the end of March.

Bigotry in the Senate?

There was an emotional debate in the Senate last week about language and choice of words. On the feature this week, we present an edited version of that debate, which started when Manitoba Senator Don Plett rose on a point of order.

Senator Plett: Yesterday in this chamber, a senator in her maiden speech, her first speech in the Senate, accused me of bigotry… To attribute such a serious charge as bigotry to the phrase “these people” is preposterous, and I will read what I said so that we are all clear. This was in reference to Senator Wetston’s speech last week. I had a question, and the question was this:

When proponents of the legislation I was asking about said, “These people have waited long enough,” or “These people deserve equal protection under the law,” I trust that the senator would not insinuate that those comments were of a bigoted nature.

Colleagues, this is not about me. This is about this chamber and the comments that were disparaging to this chamber….

Hansard is a public document in which our grandchildren – yours and mine – and future generations will have the opportunity to read about the important work we have done in this chamber.

It bothers me tremendously that my grandchildren and my great grandchildren will read that I was accused of bigotry on the chamber floor.

Your Honour, pursuant to Rule 6-13: All personal, sharp or taxing speeches are unparliamentary and are out of order.

Accusing someone of bigotry is a personal attack of the highest order, and, as such, Your Honour, it is my assertion that these comments in fact were out of order.

Senator McPhedran: Your Honour, thank you for this opportunity. I’m very sorry to hear that Senator Plett feels that I called him a bigot. I did not. My comment was addressed to a practice that can slip into many a debate, either here or elsewhere, of othering, and the damage that can happen when that becomes a practice. I’ve reviewed both the language that Senator Plett used last week that I referred to, and some of the other comments of some other senators who have expressed concerns about transgender rights, such as impact on their ability to use a bathroom, impact on their ability to express themselves.

And…I wanted to be very clear that it was as much tone as it was word. To my ears, I heard othering.

I then went on to indicate that it “can be” – I did not say that it “was” in this instance – an indicator of bigotry. And that, in a very general statement, was what I intended.

Then I went on to say that bigotry does not belong in an inclusive constitutional democracy.

Again, my intention was a general statement. What I was trying to do was to bring my own perspective as a human rights specialist, wanting to respect individual senators and the debate but also wanting to make a general observation about language that can slip into a damaging territory, perhaps not even with intent.

Senator Plett, what I would like to say to you, though, senator-to-senator, is that I do regret the experience that you’ve had from my words, and I hope that the clarification that I’m offering as to the general nature of my comment will be helpful in reducing the hurt that you’ve expressed.

Senator Daniel Lang: Colleagues, I’ve been listening to the debate. We had better cut to the chase here. I think Senator Pratte said it very well. It’s very easy to watch a senator being attacked personally and to sit here and rationalize why another senator would do this.

Quite frankly, what’s happened is totally unacceptable. I would ask, as a senator, to my new friend, Senator McPhedran, to stand up in her place and withdraw her remarks.

Senator McPhedran: Let me just say that the general point I was making about othering can stand without reference to any individual senator, that the language that is othering can be understood as an indicator of bigotry, and bigotry has no place in an inclusive democracy. I’m certainly prepared, given what I’ve heard from Senator Plett, to ask if any reference to Senator Plett could be removed — that would be the first two sentences — and leave a general statement about language that is othering.

I hope that that will be experienced as sufficient to make it clear that there is no evidence in the words that I spoke yesterday that I called Senator Plett a bigot. I did not.

The Hon. the Speaker George Furey: I know that we do give some leeway to new senators, particularly in their first speech. However, the remarks alluding to Senator Plett were outside the bounds of acceptable parliamentary debate. They were hurtful and inappropriate.

The language in Senator McPhedran’s speech of February 14 can, in the context it was used, be characterized as unparliamentary. The point of order is well founded. I strongly urge Senator McPhedran to avoid offensive personal language. Colleagues, let us continue to engage in respectful debate and avoid, at all times, personal attacks.

The transcript above is of the debate as we edited it for time on the program.  Many more things were said, and the full debate can be found online at the Senate Hansard website.

For the full text of the Speaker’s ruling, click here.

In both instances, you’ll need to scroll down the page to “Orders of the Day.”