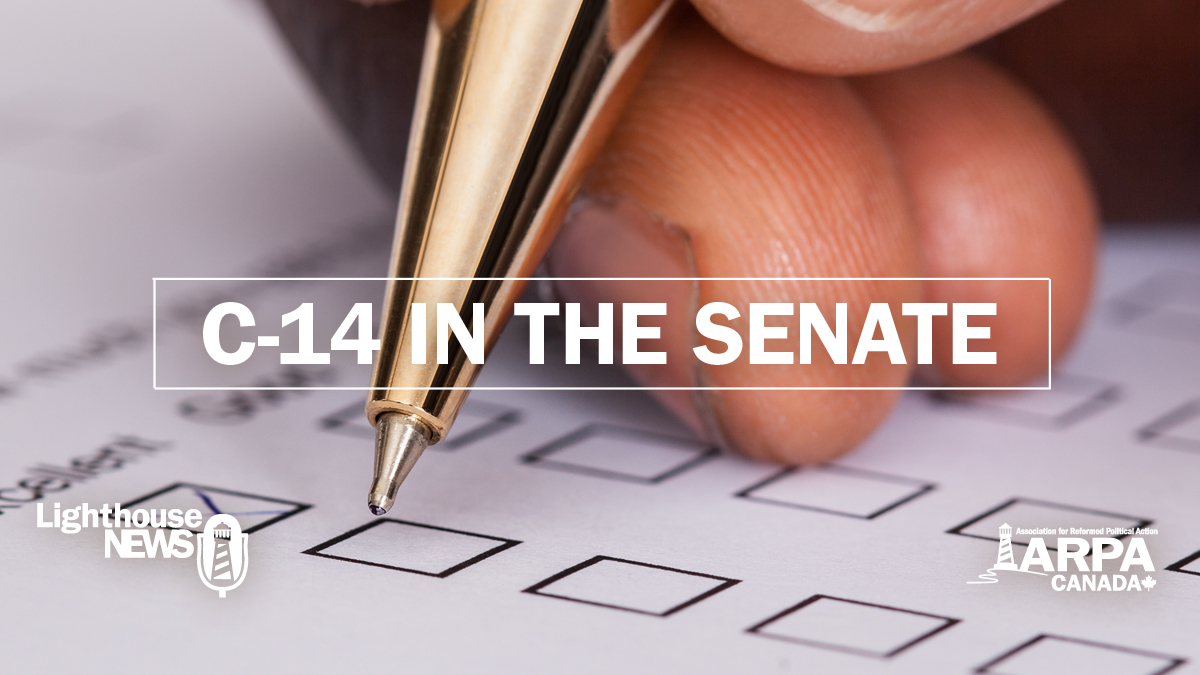 The House of Commons passed Bill C-14 last week – that’s the Bill legalizing doctor-assisted suicide. The Supreme Court of Canada’s deadline to have a new law written by June 6 has come and gone, and the Bill is not yet in effect. That’s because it’s now tied up in the Senate, which is expected to propose several amendments.

On the feature this week, an interview with Senator Betty Unger, one of the leading opponents of the Bill.

There was a big protest on Parliament Hill last week against the idea of doctor-assisted suicide.

The pro-life movement is adopting a new political strategy. The group Right Now has started a door knocking campaign to identify pro-life voters now, in hopes of mobilizing those voters in time for the next federal election.

A pro-life group in Red Deer, Alberta, put up We Need a Law’s 100,000 pink and blue flag display earlier this month. You can see video of the display here, and there’s a detailed description of the experience – as chronicled by organizer Val Beukema – here.

ARPA lawyer André Schutten was in court in BC last week for the Trinity Western Law School case, and he’s arguing the same case before the Ontario Court of Appeal this week.

And, ARPA is expanding again, with the addition of a part-time staff member focusing on educational policy.

Transcript (Feature Interview): Al: As you heard in the news, the House of Commons gave third reading last week to Bill C-14. That’s the Liberal government’s euthanasia bill that came in response to the Carter decision on doctor-assisted suicide. The bill than moved to the Senate where it was expected to get a thorough review. Last Thursday I spoke with one of the leading senate opponents of the bill, Alberta’s Betty Unger. You may remember this, she’s the one that wrote on her personal blog back in February the quote, “There is something terribly wrong when the government does more to guarantee that the living can die than to ensure that the dying can live.” Please keep in mind as you listen to this, when the interview was done, the exact timelines for the Senate discussion were still unclear.

Betty Unger: Thank-you very much, pleasure to be here.

Al: Talk to me a little bit about the process surrounding Bill C-14 now that it has hit the Senate. I mean it passed the house, the government has an absolute majority there, they turned down all the amendments that were being proposed. Everything from conscience rights to various other things. The Senate is a different animal than the House in terms of the political realities that are in play. My reading is that this bill is going to come out of the Senate with some amendments that were not passed in the House; then it has to go back to the House for more debate.

Betty Unger: That is probable, however I would like to point out that we are now a Senate such as never existed before, and from listening yesterday when the two ministers were being questioned for a total of 4 hours, questions came from all around the Senate, and everyone has a different perspective. I have no idea what the debate will look like exactly, although yesterday gave me a bit of an indication, generally about people’s views on this bill, and I’m not happy to say that I think that people who support the position that I take are not that great in number. With regard to amendments, there were questions yesterday, many about conscience rights and many about palliative care. So, will those two issues coalesce to some amendments, possibly. To me there is a reasonable expectation that that will happen, but I’m still not certain how this new group will respond when it comes to actual votes.

Al: And I guess that’s the central thrust of my question. The Senate particularly after what Justin Trudeau did last year as Liberal leader, the Senate is no longer as clearly partisan as the House. I mean in the House the vote was pretty much among partisan lines, I think there were one or two Liberals who voted against the bill, but generally speaking it was pretty predictable the way it was going to turn out, and I’m not sensing that that’s the case in the Senate.

Betty Unger: No, and in particular I’m thinking of Senator Joyal, who spoke twice, and his comments were about charter rights and his saying that he could not support the bill in its present form. He spoke on length and quite emphatically about that one issue whether or not there’s potential for a charter challenge and I’m a little bit more clear about the questions that he was asking, but I am less clear on what the answers are.

Al: So were facing a deadline here, the Supreme Court has said that the government has until June 6 to get this done; by the time this program airs that deadline has pretty much come and gone. We’re not going to make that deadline in terms of getting this back out of the Senate to the House are we?

Betty Unger: No, in my opinion we are not. Many people wish to speak on this and the bill will need to go to the legal and constitutional committee. It is possible, but in my opinion not realistic.

Al: So that leaves us in the position, and it did in a feature interview last week with Andre Schutten the lawyer for ARPA, that it leaves us in a position where in effect the Carter decision becomes the law of the land until this bill in enacted by Parliament, which if there is a summer adjournment might not actually be until September. You know, in effect Carter has been the law of the land since the ruling was issued because no one has been prosecuted under the old Criminal Code provisions. Is this a situation that, I mean I guess we had no choice, but from your perspective is this a situation that we are prepared to live with?

Betty Unger: The health minister yesterday kept making strong appeals saying doctors are being put in a bad position, they don’t know how to respond, and it’s as if there’s some emerging crisis, when in fact there is none. People already are being given this option of being, I’ll be honest, killed by their doctors at their request, so I just don’t see that there’s any great urgency, and my personal wish would be that we would slow down, take a step back and do a thorough examination of all of the aspects of this bill and if it passed and goes back to the House of Commons it will have received its due diligence from the Senate. That’s my wish, I don’t think that will happen. I think this hurry up phase is artificially being pushed and I really cannot understand what the reason could be.