A Champion for Free Votes 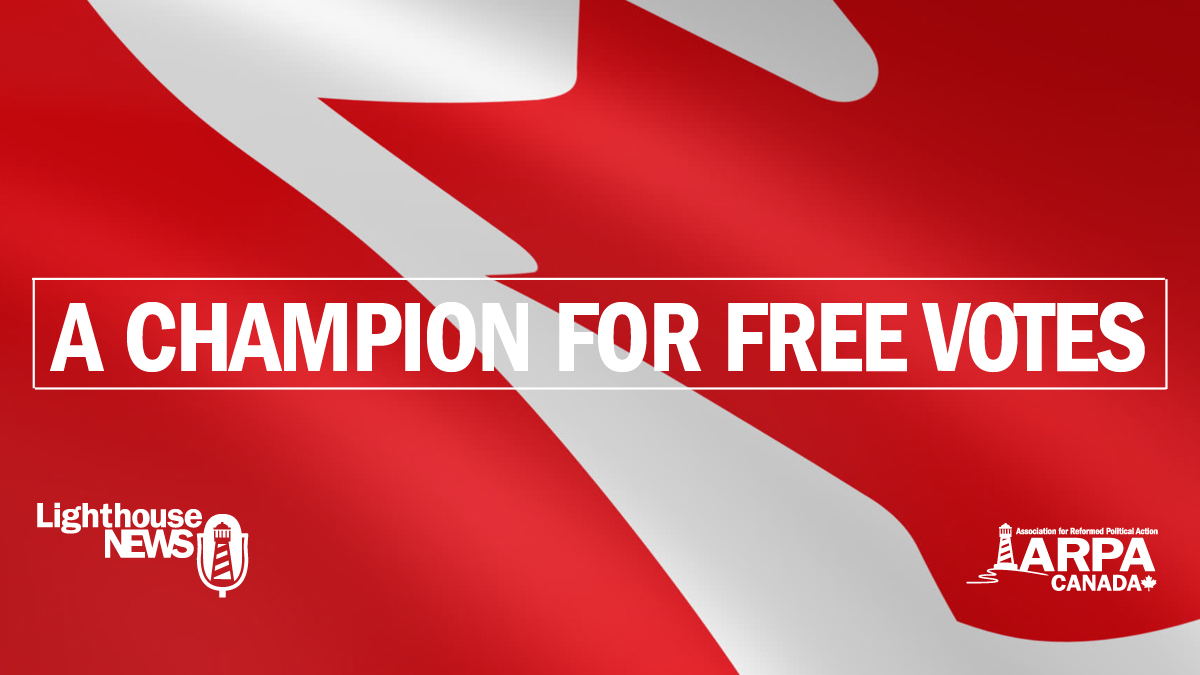 On the feature today, a conversation with Quebec MP Maxime Bernier, on his approach to social issues should he become the leader of the Conservative Party of Canada.. Click here to read the transcript of the interview.

Sam Oosterhoff weighs in on his recent win in the Ontario provincial by-election. Click here to read what Sam has to say to his critics.

And there’s some new legal analysis out on Alberta’s Bill 10. Click here for more on the latest legal opinion and resources in the Bill 10 controversy in Alberta.

OOSTERHOFF – MORE THAN A SOCIAL CONSERVATIVE

The new MPP for Niagara West-Glanbrook is settling into his role as the elected Ontario legislature representative. Sam Oosterhoff, the 19-year old political science student from Brock University, won a by-election in that constituency on November 17 – replacing former Ontario PC Leader Tim Hudak as the representative for the area. He did it by garnering more votes than all of his opponents combined, and all while defending a staunchly social conservative worldview on issues such as abortion and Ontario’s controversial sex education program.

But Oosterhoff says now that the campaign is over, he’s hoping his constituents will view him as more than just a social conservative. “I would definitely say that some may attempt to place me into one box,” Oosterhoff says, “but I’m a comprehensive conservative. My issues cover a broad spectrum. I (wasn’t) a one-issue candidate, and I don’t intend to be a one-issue MPP.”

His positions on social issues did put him at odds with some people in his party, but he’s not expecting any major friction moving forward. “There seems to be a great deal of respect within the caucus and within the party for my beliefs and perspectives, and so far I haven’t had any issues with that.”

We’ll have a full-length feature interview with Sam Oosterhoff on next week’s program.

BC SCHOOL BOARD CHALLENGED ON NATIVE SPIRITUALITY PRACTICES

A court challenge has been launched in BC over the introduction of practices of native spirituality into the public school system. The case is being brought forward by the Justice Center for Constitutional Freedoms in Calgary. Lawyer John Carpay says a mother in Port Alberni, on Vancouver Island, got a letter from the school principal a few weeks ago, informing her of a smudging ceremony that would be held in her fifth-grade daughter’s classroom.

Carpay says the letter indicated that the purpose of the ceremony would be to “cleanse the spirits of the children.” He says the letter went on to claim that “everything has a spirit; the furniture has a spirit, the children have spirits, and (the letter said) we need to fan the smoke from sage over the kids to cleanse their spirits.” By the time the parent went to the school to get more details about the ceremony, and perhaps to ask that her daughter be excluded, the event had already been held.

Carpay says the ceremony – in a setting funded by public dollars – is clearly against legal precedents set by the Supreme Court of Canada in the Saguenay decision and the Ontario Court of Appeal in the Zylberberg case. He says the rulings were clear that “you cannot have religious ceremonies or prayers or practices in the classroom as part of the (public school) curriculum, even if you provide an exemption.”

Carpay also says this isn’t about banning the teaching of native culture. He says a lot of things may be simultaneously religious and cultural, but “when the School Board says the smudging ceremony is ‘cultural’, our response is (that) it’s also religious, because it’s talking about people having a spirit, and that spirit needs to be cleansed, and we need to get rid of the ‘bad energy’ (in the classroom). Carpay says Canadians are free to agree or disagree as they wish with those beliefs, but they are religious beliefs, and the smudging ceremony was clearly a “religious ceremony”.

The court case will likely be heard next spring. 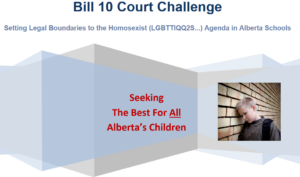 There’s a new legal opinion – and a new website – in the ongoing controversy over Alberta’s Bill 10, the law that mandates the establishment of so-called “Gay-Straight Alliance Clubs” in all Alberta schools at the request of even one student. Carman Bradley is a retired Canadian Army officer in Calgary. He’s not a lawyer, but he says he’s done a lot of research on this. “Searching through lots of legal dissertations,” he says, “I understood how the Supreme Court thinks, and these constitutional issues boil down to a duty to accommodate conflicting rights.” He says “the gain from Bill 10 should be huge compared to the burden that’s put on people”, but he says it falls “woefully short” on that front, because the benefits to transgendered students are far outweighed by the detrimental effects on things like parental rights. “For Christians and faith-based parents trying to raise their children, it violates freedom of speech, freedom of association in faith-based schools, (and) it breaches the parent’s ability to manage the medical health of their own children.” He calls the bill a “major insertion of the State into family affairs.”

Bradley also predicts that if Bill 10 is not overturned, it will “clear the table” for the introduction of radical sex education curriculum along the lines of what’s currently in effect in Ontario.

Bradley has set up a website to outline his findings: www.bill10courtchallenge.org

On the feature this week, we continue our series of interviews with various candidates for the leadership of the Conservative Party of Canada. This week, a conversation with Quebec MP Maxime Bernier. Mr. Bernier has been the Member of Parliament for the riding of Beauce in Quebec since 2006.

LN: Much has been made of the notion that the Conservative Party is a house divided right now. The Vancouver convention had the big debate on gay marriage, and some people in the social conservative wing pretty much promised to leave after they lost that debate; also after some of your fellow leadership contenders marched in gay pride parades this summer. First of all, do you agree that that’s a problem and if it is, how do you proposed to get those two sides back together?

That being said, you know, for me, I have always believed in freedom and having debates about ideas. And what I have said to our social conservative members – our social conservative Members of Parliament, (I have some of them who are in line with me with my campaign, who are on board with me, and I’ve very proud of that), what I told them, I said “You know, if you want to open a debate that will speak about social conservative values like abortion or other subjects, that is your democratic right as a Member of Parliament. If you’re a Member of Parliament you have a right to table a private bill. And if I’m the leader of the Conservative Party of Canada, I will respect that, and I will respect your right – your democratic right – to table a bill on any subject. And I can tell you that if it’s something like on abortion or social conservative values or matters of conscience, it will be a free vote. A free vote in Parliament for everybody – the Ministers included – and all the Conservative members. And we will have that debate. Because it is your right to speak about a subject; we’ll have that debate, and the Parliament will decide.”

So for me, I’m not afraid (of) opening a debate on abortion or other issues like the definition of marriage. Personally, I was for opening that definition, but if we need to have a vote, I will look at the legislation, and I will decide what will be my vote at that time.

On abortion, I don’t know what will be my position on that. If a member wants to table a bill on abortion, I will read that bill and decide how to vote after (that.)

LN: A follow-up to that though. If you become leader, would your government actually introduce draft legislation on this kind of stuff or would you leave it to the back benchers to bring it forward?

MB: Good question. I won’t as a government. I won’t introduce any bill on that, because that won’t be part of my platform. But if a member wants to table a bill – a Private Members Bill – like I said, that would be their choice. I won’t interfere. I won’t use any procedural tactic to restrain their right. That’s their democratic right, and we’ll have that debate.

But no, for me, as the government, we don’t table any bill on abortion, for example.

LN: You’re perceived as probably the most Libertarian candidate in the leadership race. On social issues – and I know this isn’t fair, but I’m gonna ask it anyway – on social issues, the Libertarians are kind of perceived as the people who say, you know, “smoke whatever you want, sleep with whoever you want, we don’t care. The government has no business regulating a lot of those sort of moral issues.”

Address that one for me.

If you look at my votes on social issues, it’s depending on some issues, like I can tell you that the right to die – that legislation that we voted on in the last Parliament – I was against that. I think it was too large; it was not respectful of the right of a doctor to say no, and to respect his conscience, and so I was against that. But it’s not about me, how I will vote. It’s about the members; what they want to do. And that’s why I’m open to having these kind of debates.

LN: OK. Final question. Just to move away from the social conservative focus, give our listeners three other good reasons to vote for Maxime Bernier.

MB: The first one for social conservatives it is…like I said…I will respect your right and we’ll have the debate and I’m not scared to open the debate on social issues in Canada.

The second. I will go back to balanc(ing) the budget and be sure to have a smaller government – a limited government in Ottawa. Because I don’t think we should have a big government that is spending the money that we don’t have. It won’t create wealth and jobs in this country, so my campaign is focused on the economy and job creation. That’s why I have a strong platform on lower(ing) taxes and abolishing supply management. I think it is not fair, and I’m the only candidate who has the courage to speak against that cartel. I think it is unfair for Canadian consumers, and I’m the only candidate who wants to abolish that.