Choice in Education is Worth Our Attention

24 Oct 2017 Choice in Education is Worth Our Attention 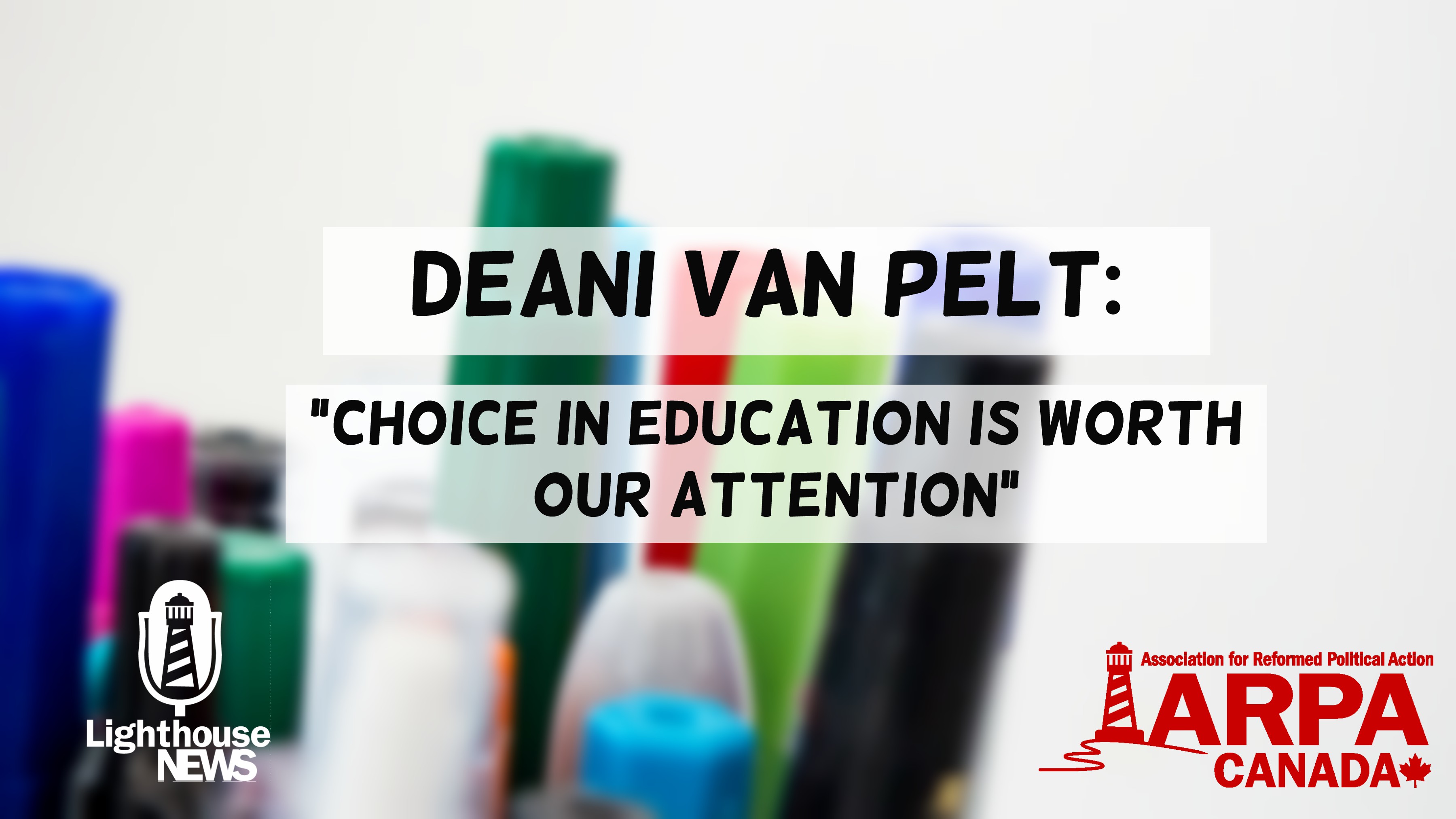 The Importance of Educational Choice: A feature interview with Cardus senior fellow Deani van Pelt on both economic and social research around the independent school movement.

Orwellian directive by Ontario Law Society to all lawyers:  Lawyers in Ontario are being told they have to develop policies to promote “equality, diversity, and inclusion” in the way they practice their craft.  We look at some of the implications of a new policy directive from the Law Society of Upper Canada

Palliative care strategy bill continues through the Senate:  And an update on the progress of Bill C-277 – the law that would mandate a national Canadian Palliative Care strategy 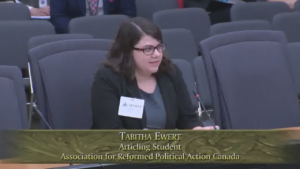 ARPA made a presentation last week to the Ontario Legislature’s Standing Committee on General Government. The topic was Bill 163 – Ontario’s pending “bubble zone” legislation that would prohibit demonstrations outside abortion clinics in the province.

The presentation was made by ARPA articling law student Tabitha Ewert, and she started by referencing this spring’s court victory on Ontario’s ban on the publication of abortion statistics.

Here’s a partial transcript of what she said:

The court found in that case that censoring of such data was an unconstitutional violation of free expression. In essence, the court recognized that there is an ongoing discussion about abortion in this province, and that the government cannot interfere with that discussion.

And so we are happy to see that this government is bringing FIPPA in line with that ruling, but we have major concerns about the rest of this bill and the way that it interferes with the ongoing public discussion.

I have two main points that I would like to make regarding this bill. The first is that it’s unnecessary – we have Criminal Code prohibitions that cover all of the extreme behaviours such as assault. And the second point I want to make is with regard to freedom of expression and peaceful protestors who would be covered by this bill.

So first of all, it is unnecessary. There is just no evidence that without this bill women’s safety or access to abortion would at all be infringed. In Canada, we have safe access to abortion. And part of the reason for this safe access is the fact that we have Criminal Code prohibitions that prohibit such things as assault, threatening, intimidation, or harassment. These provisions cover abortion clinics just as they cover the rest of the province.

And the one incident that is referred to in support of this bill – the alleged spitting in Ottawa – that is assault. That can be charged under the Criminal Code. There’s no reason for the province to supplement the Criminal Code in that situation. In fact, it is unconstitutional for them to do so because only the Federal government can pass Criminal Code prohibitions. And the sponsor of this bill, the Attorney General, should be prosecuting such crimes rather than inventing new laws that also silence peaceful protestors.

And for my second point – the freedom of expression – making it illegal to show disapproval of abortion; that is not about protecting patients or physicians. That is about silencing dissent on the issue. It’s about silencing pro-life speech. But we have no right to be free from dissent in Canada, no matter what issue is at stake.

I just want to be clear on this point, because there’s a lot of rhetoric around this issue. Protecting women’s rights or making a step forward for women’s rights, cannot include fining and imprisoning women who disagree.

And that is what this bill does. It says if you hold a certain opinion, you cannot express it. Your constitutional rights are not protected. That is unconstitutional, and it does not aid the important ongoing public discussion that is going on in Ontario over the issue.

For extreme behaviour – for harassment, for assault – that is covered under the Criminal Code. For peaceful protestors, there is no need to silence them in this ongoing discussion.

You can watch a full video of Tabitha’s appearance at this link.

Reviewing the school board election results in Alberta

Alberta residents went to the polls last week in municipal and school board elections. The group “Parents for Choice in Education” had published an online assessment of a number of public and Catholic school board candidates in advance of the election, particularly with respect to where they stood on things such as parental notification and parental rights. Executive Director Donna Trimble says they were able to list more than 200 trustees in 16 regions across Alberta in their online “vote wisely” voter’s guide, and they’re very pleased with the traffic that was generated on the site. She says the goal was to “increase the number of people that were thinking about and paying attention to” the trustee races. She says her group didn’t endorse any candidates, but they have now heard of trustees across the province that shared the PCE material, and who have now been elected.

But Trimble says the job of parents isn’t over. She says while there are now trustees who are aware of the issues that PCE has been raising around issues such as parental notification, it’s “really important” that parents call the newly-elected trustees who might be sympathetic to the case of parental rights. “Sit down, have a conversation with those trustees, (because) if you’re not talking to them, someone is.”

Orwellian directive by Ontario Law Society to all lawyers

The Law Society of Upper Canada, the group that regulates the legal profession in Ontario, is out with a new directive for its members. About 50-thousand lawyers across the province have been told they have to create, submit, and abide by an individual statement of principles that acknowledges their obligation to “promote equality, diversity, and inclusion.” Don Hutchinson is one of the lawyers who’s covered by that directive, and he says the Society is clearly over-stepping it’s authority with this demand. He says lawyers already have rules of professional conduct that require them to behave a certain way in their relationships with other lawyer, staff, and clients. “What the Law Society is asking of us at this point is to echo words that they are placing in our mouths that create a greater obligation than the one they authorized to ask of practicing lawyers.”

Hutchinson says as a Christian lawyer, he doesn’t have a problem with treating people with respect. “As a Christian, I believe and practice the Biblical recognition that all persons are created in the image of God, with inherent dignity and value.”

The Society says the policy directive is in response to a report which claims some Ontario lawyers have racist or discriminatory attitudes, but Hutchinson says the directive reminds him of “when we were in elementary school, and somebody misbehaved in class, and the entire class would get a detention.”

Hutchinson has written an extensive treatment of this issue at the Cardus “Convivium” blog. You can find it here.

The Senate has started Committee hearings on Bill C-277. That’s a private members bill from Sarnia-Lambton MP Marilyn Gladu which calls for the establishment of a national palliative care strategy in Canada.

Gladu kicked off the Committee hearing last week by talking about several components of the bill, including the notion that there is a need for better training in palliative care across the country. She says there are only about 20 palliative care specialists in Canada today, and with an aging population, the need for about 600. “But it’s not just the specialists,” she told the committee. “At the General Practitioner level, in some cases they don’t even get two months of palliative care training, and nurses are graduating with no palliative care training. Home care and hospice workers sometimes don’t have a level of training they need, and in rural and remote communities, many times it’s family members that are giving palliative care.” It’s time, she said, to “provide that training and set some standards in that area.”

ARPA’s Colin Postma sat in on the Committee hearing. He says it appears that just like in the Commons, the Bill will receive all-party support in the Senate, although there’s no word on when it will come back to the Senate Chamber for a final vote.

Our guest on the Lighthouse News feature this week is Deani Van Pelt, she’s a Senior researcher with Cardus regarding a recent piece in the Hamilton Spectator.

LN: So, you had a piece published in the Hamilton Spectator earlier this month talking about education funding in Ontario. First,. some background. This was in response to another op-ed on funding for Catholic Schools, correct?

LN: So for listeners in the rest of the country, Ontario is the only province outside of the Maritimes that doesn’t fund independent schools. Yes, they fund the Catholic ones, but not the others. And the math inherent in that is also significant.

The parents who choose options other than government-funded public or Catholic Schools in Ontario are saving the taxpayer – by your estimation – about $1.7 billion dollars?

LN: I don’t know how much research you’ve done on other provinces, but I’ve seen numbers for Alberta and BC for example – where part of the operational budgets for independent schools are funded,. no money for capital – but these numbers that seem to show that every time parents choose to educate their kids outside the government system, there’s a big saving involved for provincial education budgets. This isn’t just in Ontario. Can you comment on that, in terms of the savings that are inherent in that system?

LN: And yet, we continue to see some sectors of society – I’m thinking of “Progress Alberta” for example, and some teachers unions – we see these groups demand that government cut all funding to independent or private schools because they’re “elitist.” How do we respond to this?