Confusing the roles of Church and State

23 May 2017 Confusing the roles of Church and State 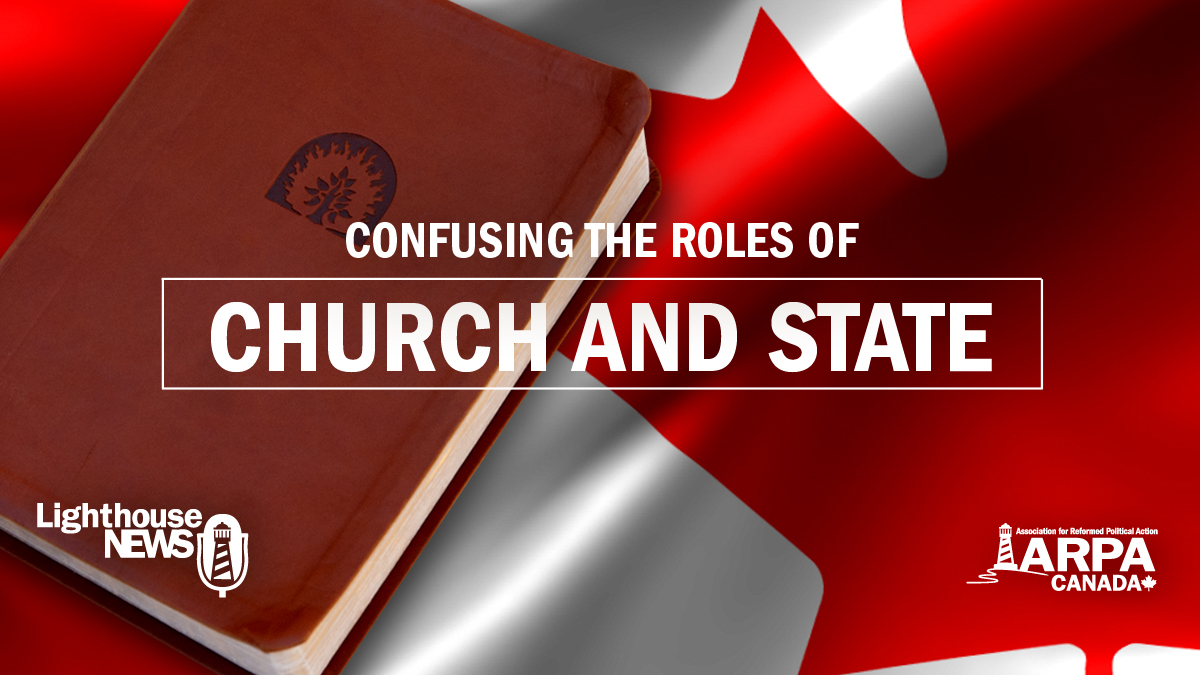 Feature: The Supreme Court of Canada will be considering a case that has profound implications for matter of church discipline. On the feature this week, ARPA lawyer John Sikkema, on the principles underlying the case.

New Lawyer: ARPA is bringing a third lawyer on staff.

GGY17: A final look back at this month’s God and Government Youth Conference. 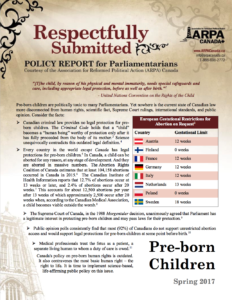 ARPA has released a new Respectfully Submitted policy report. Law and Policy Director André Schutten says the report focusses on abortion and pre-born human rights. He says the report uses language that is “winsome in today’s culture. The language of ‘human rights’, and basing (the policy position) in science.” He says the report pulls the reader through both the scientific record and then relates the issue to human rights, and how currently, Canadian law is “completely incompatible with both science and human rights.”

He says the report also proposes a “reasonable first few steps” towards protecting the pre-born, including gestational limits, recommendations regarding informed consent and advance notice. Five thousand copies of the report have been printed; copies have been sent to every MP and Senator, and also to the entire ARPA donor base. You can also view the report online, here.

The Manitoba government has introduced legislation to strengthen the notion of conscience protection for doctors and other healthcare professionals. Bill 34 is called the “Medical Assistance in Dying (Protection for Health Professionals and Others) Act”.

Health Minister Kelvin Goertzen says it would prevent sanctions against a health professional who refuses to participate in a medically assisted death and ensure that medical professionals are not disciplined for their beliefs.

The bill also prohibits a professional regulatory body – such as the College of Physicians and Surgeons – from requiring its members to participate in a medically assisted death. The College already has guidelines on this issue that say doctors in Manitoba may refuse to provide medical assistance in dying. They can also refuse to refer the patient to another physician who will provide the service, but they do have to provide patients with “timely access to a resource that will provide accurate information about MAID”. They also have a duty to promptly inform the patient of any conscience-based objections they may have.

Pro-life blogger Patricia Maloney has taken on a new project. She’s written a series of blog posts debunking some misinformation that’s being promoted by Joyce Arthur from the Abortion Rights Coalition of Canada, specifically about Crisis Pregnancy Centres around the country.

Maloney says Arthur’s positions are simply not based in fact. She says one of Arthur’s biggest complaints about the centres is that they “mislead women and give them misinformation”, she says the centres claim to be medical centres when they’re not and that they’re really “Christian ministries”.

“And,” Maloney asks, “what’s wrong with being a Christian ministry? To me that’s a good thing. They don’t do terrible things to you. Does Joyce Arthur have a problem with Christians?” You can find her blog series at this link.

New lawyer coming on board with ARPA

There’s a new staff member coming alongside the ARPA team. Tabitha Ewert has just finished her law degree at the University of British Columbia and she’s moving to Ottawa this summer to do a year of articling with ARPA’s legal team. To start her training, Tabitha attended the Christian Legal Institute conference in London, Ontario earlier this month.

She says the experience was very intense. “We spent about 8 hours of every day in lectures or discussions, and we would then carry over those discussions into meal times and social times.” She says the conference was a great education experience. “The focus was on Christian involvement in public life. What is our role? What does the Bible say our role is?” She says there was a lot of emphasis on the notion that neutrality is “a bit of a myth; in everything we do, we are either covenant keepers or covenant breakers.”

When she’s finished with her articling process and is admitted to the bar, the plan is to have her focus most of her efforts on the We Need a Law side of ARPA’s organization.

A last look back at GGY17 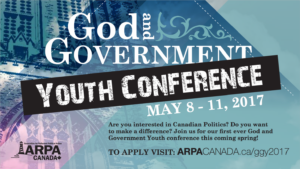 Twenty-nine young people – mostly 11th and 12th graders from across the country – gathered in Ottawa for three days earlier this month for training in politics, worldview, and apologetics. Their experiences and impressions of the conference are now documented in an online video. Generally, the consensus was that the conference was valuable for education, networking, and equipping them to interact with the culture and with their elected officials. One of the participants actually had an encounter with Prime Minister Justin Trudeau. “We were walking out of Question Period and I didn’t realize he was walking beside me. I looked over and saw all these bodyguards and realized ‘oh, someone’s there.’ And it was Justin Trudeau, and he looked at me and smiled.” For a full account of the students’ impression, you can check out the online video, here. 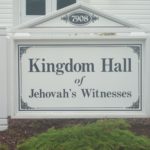 The Supreme Court of Canada has agreed to hear a case that has profound implications for the legal relationship between Church and State. It involves church discipline and centres on the question of whether someone who has been disciplined by a church can appeal that discipline in the secular court system.

ARPA is looking at filing for intervenor status in this case and lawyer John Sikkema is busy this week studying what it would take to file that application.

LN: So give me some background on this case. I mean, there’s really a battle going on here between the authority of the State and ecclesiastical authority of a church. But let’s start at the beginning. How did this all get going?

LN: So I guess initially I would ask “What’s the fundamental difference here between the ‘dis-fellowshipping’ and the ‘shunning’ that the JW’s practice, and what’s sort of been historically considered ‘church discipline’ in the more mainstream Protestant and Reformed way of thinking?”

JS: Yeah, I think that difference does play into how the case plays out. I mean people can look at something like church discipline and see it as something controlling or even creepy, and I think some of those misconceptions about church discipline do come from people doing it wrong as, you know, Christians often do things wrong and not in accordance with how the Bible teaches. And here I think the Jehovah’s Witness practice of “shunning” – that you don’t do business with the person, you don’t eat with them, you don’t do other things and that could even be between members of the same family; there’s a certain amount of social shunning that occurs when a person is dis-fellowshipped – that that seems to be a confusion of the purpose of discipline. So if you look at “what’s the end and the means of discipline”, I think in our teaching the point isn’t to shun the individual.

You know, it’s Matthew who records for us “treat the person like an unbeliever or a tax collector.” This is Matthew, the former tax collector. And so what does that mean, to treat the unrepentant sinner who’s being disciplined as a “tax collector?” Does it not mean to lovingly pursue that person with the aim of restoring them, and to show them love? That may mean that they’re not allowed to do certain things in the church, but (should) the way that you relate to them (actually be) “I’m not allowed to talk to you help you, or do business with you, or any of those things anymore. That’s my way of loving you as an unbeliever.” I don’t think that fits. So that I think would be the difference.

And I think factually, that plays into how sympathetic the court is to Mr. Wall. They are sympathetic towards him and they see him as losing business – and he has a financial interest – and based on that sympathy sometimes you can get around what the law actually says, when you’re motivated in that way.

JS: Yeah, I think, if I could try to put it in one sentence, it’s “Can a matter of church discipline be appealed from the Church to the State?” So there may be legitimate areas of – you could say – overlap or interaction between the spheres; between Church and State. But here, it’s kind of like the State becomes a Synod or a higher level of appeal of a church discipline decision. So that’s what’s going on here. Mr. Wall is asking the court to say “Can you decide that the congregation improperly dis-fellowshipped me?” That raises questions of church practice, it raises questions of church doctrine, it raises questions of judging him to be sufficiently repentant or not. Things that the courts aren’t equipped to do.

So this case actually didn’t get into that yet. It didn’t get into “was he properly dis-fellowshipped? Was the procedure fair? Have his civil rights – his property rights, his contract rights, anything like that – been violated?” They just started with the question “Do we even have jurisdiction here? Do we – the judges – have authority even to look into this case, or should we reject it out of hand?” And so this is kind of the preliminary question before getting into the rest of the facts of the case. And both the lower court and the Court of Appeal (have decided) “Yes, we have authority to review the decision of the Jehovah Witnesses congregation.” And that’s the problem; they’re claiming the authority to do that.

LN: And that’s what’s going to the Supreme Court. The Supreme Court has agreed to hear that.  Now moving forward, ARPA’s considering applying for intervenor status on that, and considering putting together some kind of a coalition of churches in the same way that we did a coalition of independent schools and Christian schools in the Loyola case, correct? What might that look like and how long’s it going to take before we determine whether or not we’re going to do that?

JS: Well, it will need to be determined soon, because the Court has given leave to appeal on this case and arguments are starting to be filed now. So we’ll need to move fairly quickly on that. But one of the reasons we want to get involved is to bring the Reformed perspective on church discipline to the public and to the courts; and to remind the court of the historical developments in the relationship between church and state, and of the importance of church independence and the limit of state authority over the church, historically. That’s something that’s just fundamental to the development of democracy and the rule of law. And we do also want to maybe highlight some differences between Reformed practice and Jehovah’s Witness practice.

We can definitely count on the Jehovah Witness congregation and their lawyers to argue that freedom of association and freedom of religion gives them the authority to make these kinds of decisions. So we would want to reinforce that, but obviously not just repeat what the Jehovah Witnesses’ lawyers are going to be saying about their Constitutional freedom to do that. We’d want to put things in a broader legal/historical context, with a Reformed perspective to really impress on the Court how important this is.