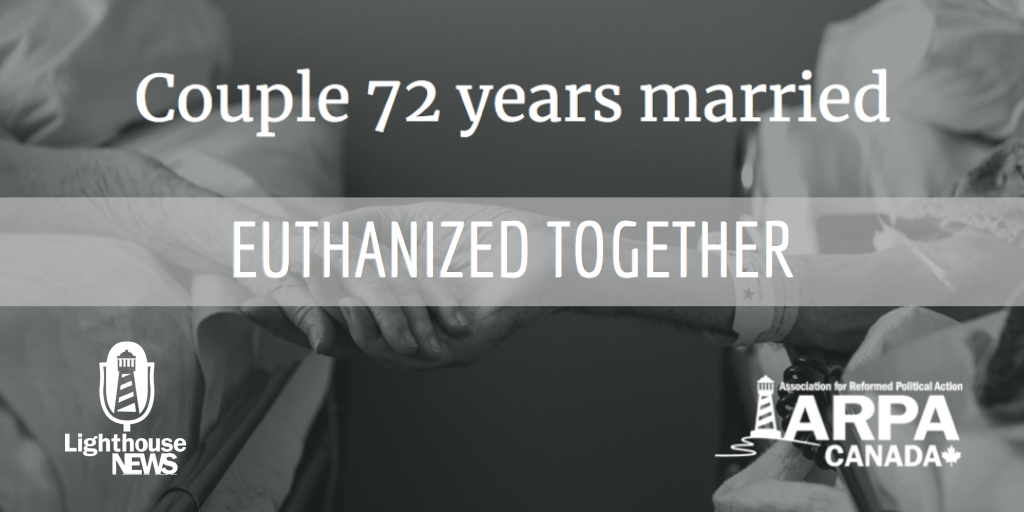 A troubling development as assisted suicide continues to spiral in Canada:  On the feature this week, a look at the deaths of two elderly people in Toronto in what was essentially a doctor-assisted double suicide.

Bill 24:  A court challenge to Alberta’s Bill 24, which bans schools from sharing information with parents about student activities in Gay-Straight Alliance clubs.

Faking pro-life violence:  Waterloo Regional Police in Ontario have charged a 41-year old woman with mischief, after she filed what’s been determined to be a fake police complaint about violence by pro-lifers in Kitchener.

Abortion Statistics:  The Canadian Institute for Health Information is out with some disturbing new statistics on late-term abortions in Canada.

On the feature this week, a world-view analysis of a recent case of doctor-assisted suicide. George and Shirley Brickenden were both euthanized, together, in their bed at a Toronto-area retirement home.

Mr. and Mrs. Brickenden were both in their 90’s.  They had been married for almost 73 years, and made a deliberate decision that they wanted to die together.

This week, we feature an edited rebroadcast of a portion of a program called “The Briefing” by Dr. Albert Mohler from the Southern Baptist Theological Seminary, in which he analyses some of the underlying worldview issues brought to light by the story.

In his discourse, Dr. Mohler refers to a lengthy Globe and Mail article on the issue of doctor-assisted dying, which you can find here.