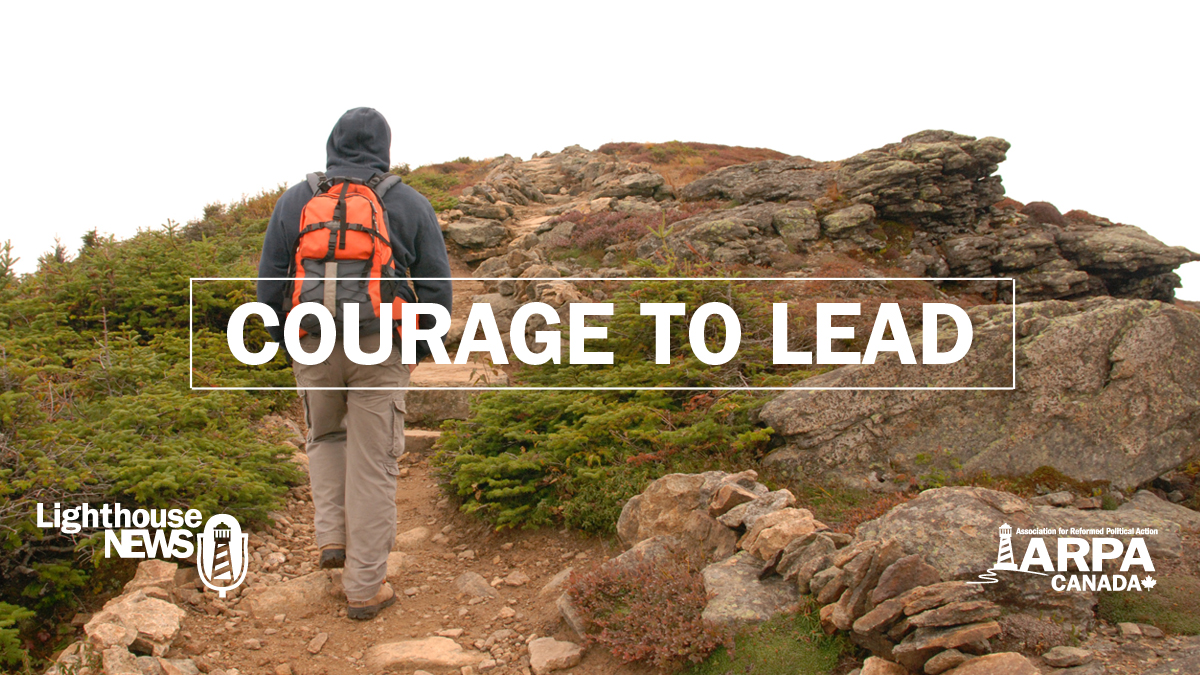 On the feature this week, an exclusive interview with Saskatoon-University MP Brad Trost, as he considers an entry into the leadership race for the Conservative Party of Canada. Mr. Trost is well-known for his pro-life views, and he told us that unlike Stephen Harper, he doesn’t believe there’s any issue that should be off-limits for Parliamentary debate, including abortion.

A new independent survey shows nearly 70% of Canadians support the idea of a law to make it a separate crime to harm or cause the death of a pre-born child while harming a pregnant woman. The Nanos Research poll was paid for by Saskatchewan MP Cathay Wagantall. The full results of the poll are available here.

There is more controversy over a pro-life billboard in Kelowna, BC. Just weeks after the Advertising Standards Council ruled the billboard could stay, it has been subjected to repeated instances of vandalism and graffiti, including being painted with swastikas. Pro-Life Kelowna has appealed to the City for help, and they’ve now received a response from the Mayor.

We Need a Law is continuing to work on its Parental Consent campaign in Saskatchewan. There are five interns working on the project this summer, attending community events and going door-to-door to gather signatures for a petition on the issue of parental consent.

In BC, the provincial government has accelerated the timeline for its plan to add “gender identity” to the list of prohibited grounds for discrimination under the BC Human Rights Code. Originally, this was going to happen next year but last week, the government announced the issue will be dealt with in a special summer sitting of the legislature.

Al: We’re back on the program. It’s a pretty quiet summer for politics in Canada. The Americans of course have been pretty busy with their conventions ahead of the Presidential Elections. On this side of the border there’s really not much going on. The Conservative leadership race has been pretty quiet. There was one more entry a few weeks ago. Tony Clement announced he will take a run at it. A man considered one of the leading social conservatives in the party, Jason Kenney, announced earlier this month that he is bowing out of federal politics so he can focus on re-uniting the right in Alberta. This has left a bit of a void in the leadership race in terms of a candidate that the social conservative wing of the party can support. One person whose been publicly musing about filling that void is Saskatchewan MP Brad Trost. He hasn’t formally declared yet, but he’s certainly thinking about it. Earlier this month I reached Mr. Trost by telephone at his Saskatoon constituency office. I started the interview by asking him why he’s considering a run, and what his campaign might look like.

Brad Trost: Well the first reason I would do it is because I believe we need a conviction-based, broad-spectrum conservative. That would be a conservative that’s conservative on fiscal issues, small government, low taxes, keep the government focussed on a few major issues – and a social conservative – someone who believes the family is an essential element of society. The government instead of discouraging the traditional family should support it with whatever legislation that Government does have to be involved in; should be supportive of it, supportive of life from conception onward, values like that. So I think we need a broad-spectrum conservative. I have a large range of issues I have dealt with in my years as a member of parliament and that’s what I think I could bring to the race if and when I decide to go.

Al: There’s a considerable variety of opinion within the party right now on the issues that are important to social conservatives. I mean the convention removed the traditional definition of marriage in the policy document, and then on Canada Day Rona Ambrose and pretty much every other declared candidate for the leadership marched in the Toronto Gay Pride Parade. A lot of folks considered that in particular to be poking social conservatives in the eye with a stick. I know a lot of long-time party members and even former MPs and candidates and local EDA board members who just walked away. What do you say to those people and how do you address that reality that’s going on in the party right now?

Brad Trost: Well the first thing I would say to people who are leaving: if you’re leaving you’re letting the other side of the argument win by default. Second thing I would say: you have to remember in any political party there’s people with different views. There’s a lot of people who don’t have views and you need to be there to talk to them and explain to them why your understanding, and why your policy, and what you believe is right. As for myself I don’t think there’s any secret I’m not going to be marching in any pride parade, I don’t share their values, I don’t believe in same-sex marriage, so why would I go to something like that. Every Conservative MP has to make their own decision, but the Conservative party in its entirety definitely does not endorse that. We have backed decisions over the years, either all of caucus or almost all of caucus, that would be contrary to the values that are promoted by the people who run these pride parades. So I think everyone should think very carefully about what they do, and how they get involved in these issues.

Al: But there seems to be a general slide into, sort of, social liberalism across the board – that’s the perception. I mean even Stephen Harper for all the years he was Prime Minister said “we’re not going to re-open the abortion debate”. Let’s say that you win the leadership and eventually go on to be Prime Minister, are you going to take that same approach that Harper took on some of these issues, and say, “You know what, the courts have ruled, things are settled. We’re not re-opening this debate.” Or is it time for the not withstanding cause?

Brad Trost: No, I definitely have a different perspective than Stephen. While I respect him and respect him highly for what he accomplished as Prime Minster, I don’t understand why Canada is the only democratic country in the world without an abortion law. There’s an organization I’m sure most of you or your listeners are familiar with – WeNeedaLaw – I think that sums it up fairly clearly. Countries that are actually more socially liberal than Canada have legislation on abortion. Now if I should someday become Prime Minister – again that’s a very remote possibility, but not totally impossible – if I was to become Prime Minister someday I think it would be wise for the Parliament to have a proper debate on this issue, and a vote. How that would go, where it would go would depend on who is elected, etc. But as a member of parliament it doesn’t matter how difficult the issue is, you are elected to be a leader. And I don’t think there’s any issue in the House of Commons that involves justice issues, etc. that should be off limits. That includes abortion. I realize a lot of politicians don’t like to deal with tough emotional issues, but if you don’t why are you asking people to trust you as a leader? You need to be able to do it. And there’s something else I want to remind people: we had a vote that was roughly viewed as a proxy on whether or not Canada should have an abortion law – the majority of the Conservative MPs supported that motion that was done by my former colleague Stephen Woodworth. Even Members of Parliament who are not pro-life, MPs who are pro-choice agreed, so I think we can build a coalition and reach out to people who would not necessarily be 100% with us to try to get something accomplished. So no, when I played football – kicker who punted on every play was not my favourite position.

Al: Let’s talk about some political strategies and realities here. Jason Kenney is now out of the race – he was sort of seen as the most high-profile social conservative with an eye on the leadership. Now that he’s gone who’s left? I mean I know Andrew Scheer from Regina might be interested but, is this a case of consolidating the social conservative vote? I mean some estimates say 35-40% of the party identifies that way, so if you’re the first social conservative to get in the race – let’s say for the sake of argument you’re the only one – you’ve got a pretty good base of votes to start from, but still not enough to take you over the top. How do you build a coalition that attracts enough other votes to win the leadership?

Brad Trost: Well I appreciate your confidence but I’ll say this, I don’t think people are easy to put in any demographic. I think there is a lot of social conservatives in our party, and I think that would be one of my pitches, but I’ve also got a record – and I know people are going to find this odd – my first campaign manager was a pro-choice former progressive conservative candidate – she still backs me to this day, so I’ve reached out to people. I’ve had libertarians, people again not socially conservative who I’ve worked with before, so while my pitch as a clear social conservative will be involved if I get a leadership campaign going. I will also be talking about a broad spectrum of issues. I’m very much interested in tax policy – I have an economics degree along with my background as a geo-physicist. I’ve worked on the International Trade Committee, International Affairs, and I’m the Party’s Canada-US critic, so I’ve dealt with a large number of issues. Again, one thing I will also remind people, even conservatives who aren’t social conservatives, most of them don’t mind working with social conservatives, other wise they wouldn’t be a part of the Conservative party. So just because you don’t identify with something doesn’t mean you are opposed to it. You are going to be open to other ideas about privatizing the CBC, having a more efficient tax system, rebuilding our armed forces, all those things need to be talked about and I think with those things you build your coalition.

Al: So how close are you to making a decision about a run?

Brad Trost: One thing I will say, we are figuring out if we are going to get this thing going, and trying to gauge the volunteers. So we do have an email set up at [email protected].

Al: A date on a final decision?

Brad Trost: It’s coming fairly quickly, I have some family things I need to attend to. My wife’s Asian and we have to go to a sister-in-law’s wedding there, but I think people will know definitively sometime this summer and we’ll probably make the official announcement not too long after that.

Brad Trost: Okay, good to talk with you.