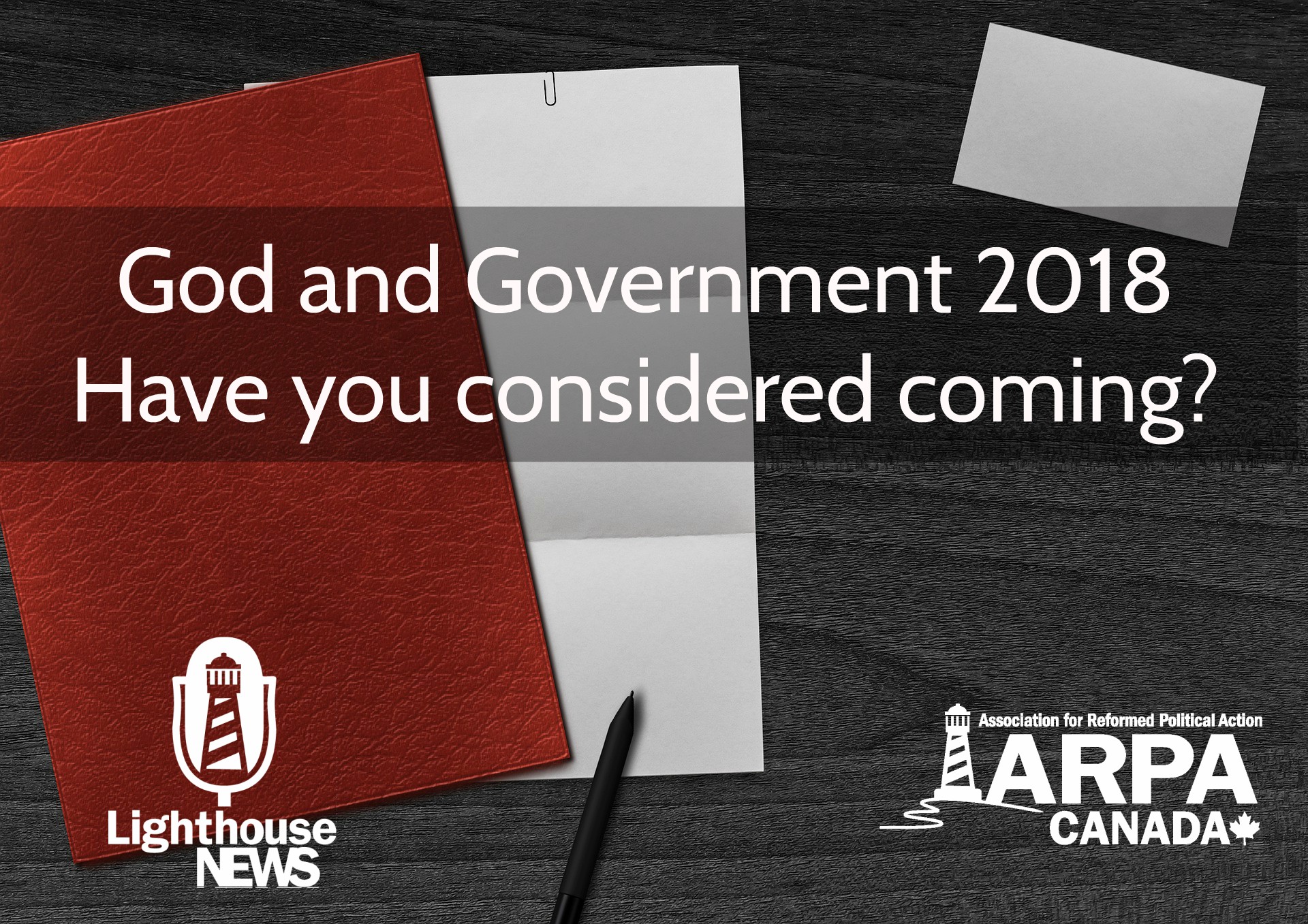 Morgentaler anniversary:  WeNeedaLaw gets ready to mark a major milestone in Canadian jurisprudence. We will be posting more on this story later this week.

Bibles and Letters:  And a final look back at two major ARPA projects from 2017. You can read more on these projects here and here.

On the feature this week, a look ahead to this year’s God and Government conference, which is being planned for April 18-20th in Ottawa.

The guest is ARPA’s Grassroots Manager, Colin Postma, who is one of the main organizers of the event.

LN: We don’t often find the words “God” and “government” even in the same sentence. In some sectors of society, there’s an outright hostility to “mixing religion and politics.”

But that’s the title of this conference. This is pretty counter-cultural.

CP: Well, Al, ultimately that’s the mission of ARPA. If you look at the mission statement that ARPA has, it’s to “educate, equip, and encourage” Reformed Canadians to get involved in political action first of all, and then also to bring a Biblical perspective to our governing authorities. So that’s what ARPA’s all about; that’s what our grassroots is effectively doing.

So when they’re out there campaigning for various things – when they’re looking to change Canadian law – it’s about bringing that Biblical perspective to government.

And so, this is our main biennial event. It’s our signature event. It’s really the biggest event that we put on every two years. And it’s basically our biggest effort aside from our yearly fall tour. So as ARPA we would say we believe that Christ is Lord over all, and that if Canada does what God has said in His Word, then Canada will prosper. And if Canadians reject that, then we can only expect to receive judgement for that.

I mean obviously there’s a whole bunch of theological arguments that go behind that as well, but effectively – it’s based on the mission – that’s our purpose as ARPA. To bring that perspective.

LN: So fundamentally, it’s about equipping the base to get engaged when they get back home?

CP: Effectively, yeah. The whole purpose of it is really about focusing on that grassroots aspect of it. It’s about the educating, equipping, and encouraging people.

So based on some of the layout of the event, I can share with you a little bit.

The first day is going to be a primarily policy-focused day. So there’ll be a couple of speeches looking at a couple of different topics that ARPA looks at. Some of the main issues that we do focus on. Some of the things that are going on right now.

We recently released our in-vitro fertilization report, so there’ll be a speech that will be involving that. As well, there’s a couple of new updates; kind of a new approach to the pre-born human rights aspect of the We Need a Law campaign that we also run, and so that will be part of that day. The first day.

And then the third day will be a primarily grassroots focused day. So it’s going to include some workshops, it’ll include us doing some role-playing as well and that kind of thing, in order to really help people to gain some of the skills necessary to go back to those places that they came from – to go back to their local communities – and to be a witness, to be a light.

So effectively yeah, the whole thing is about educating and equipping and encouraging people to do those kinds of things.

LN: Part of the conference involves meetings with MP’s and Senators. We’ve done this for a number of years now. What kind of influence do these meetings have?

CP: When you look at people in – like I say – in their local communities, people doing these sorts of meetings with MP’s and Senators when they come to Ottawa for the God and Government conference, these kinds of meetings over the past couple of years have really been able to…. it’s been the feet on the ground of the people who have been able to sort of lay a foundation for ARPA’s name to be well-respected in government. And so it’s something where the work of people on the ground – people that support ARPA – has been foundational to us being able to put out a Press Release or to be able to put out a Policy Report and to get people reading it, actually. To see Members of Parliament willing to read it; willing to respond to it.

Even our recent Bibles campaign – where we sent a Bible to each Member of Parliament as well as every Senator, MLA, MPP, that kind of thing – the response that we’ve been able to have from that, even from letters that we’ve received back.. some of them have been, you know, obviously just generic responses, but some of them have been pretty heartfelt. And I think that really goes to show the personal connection that individuals – that our grassroots – have been able to make on the ground.  And so that’s why I think that this kind of effort – equipping and educating and encouraging people from our God and Government conference as well as for the work that they do on the ground – is just so fundamental to the work that we do.

LN: These conferences also have an impact on the people who attend; it’s not just about government policy. I’m thinking for example of Arnold Viersen, now the MP for Peace River-Westlock up in northern Alberta. He really didn’t have too much interest in politics before he attended his first God and Government conference, and now he’s sitting in Parliament.  Is that part of this exercise?

CP: Totally. That to me is one of the most exciting things about this exercise, is really seeing what it does to those people that attend. And the excitement level that they have when they are attending the conference and they go back and take it and share it with their friends, share it with their families, share it with their churches, and new ideas spring up, and people just start doing things. And then yeah, there are people who do go on to get involved in politics specifically, but to me I think it’s even more encouraging to see those individuals who have just made life changes. Not changing jobs per-sé, but where they have just decided that they’re going to make a difference in the community that they’re in. You know, there may be some students that attend – and we’ve been really encouraged to see some of them choosing to become lawyers, some of them choosing to become professors, some of them choosing paths towards politics as well as getting involved in pro-life activism and that kind of thing. But to me it’s really about the people who are already in a job – in a career – who have decided that they’re going to take extra time that they have out of their day in order to do this kind of activism. And it’s that kind of excitement, I think, where we’re really going to be able to make the most impact.

LN: Some particulars on the conference. Dates, registration deadlines, costs, accommodations and all that sort of stuff. What can you tell me?

CP: This year it’s a little bit different than what we’ve done in the past. We always had it sort of, there was a separate hotel and then the conference space was in a different building. This year, it’s actually going to be in the Sheraton Hotel, which is just about 100 metres down the road from the Ottawa ARPA office building, and so it’s all going to be contained in the same space, which is really great. So you can come down from your room and be right in the same building as where the conference will be happening.

So there’s sort of the generic God and Government full conference fee; early bird price of $300 for Ontario and Quebec residents, and then there’s a special rate – due to the extra travel costs – for those coming from other provinces. The early bird price there is $200.

And then there’s extra ticket prices if you’re just coming for the God and Government banquet only, or if you live in the area of Ottawa, so you wouldn’t need a hotel or accommodations that way.  We also have a special rate this year for pastors and teachers. The early bird prices are only valid up until February 5th, so do book it before then.

All that information is on the website, we’ve got a full chart with all of the pricing information.