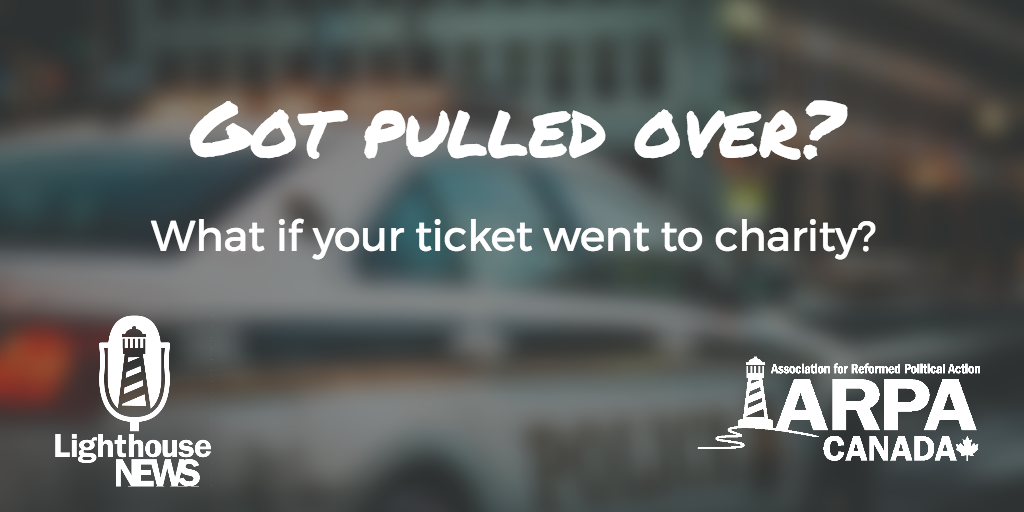 Speeding Ticket Revenue – An idea from the US would direct traffic fine revenues to charity. Reformed Perspective editor Jon Dykstra discusses with us.

A Win for Christians – An Ontario Christian school wins at the Human Rights Tribunal against a complaint challenging the schools support of traditional marriage.

Public School Board Elections – Why you should get involved.

Pushback to Pro-life Messaging – Town Council in BC asked to ban pro-life displays at public parades.

The Ontario Human Rights Tribunal has handed a major victory to a small independent Christian school in that province. The case was about whether the school was allowed to refuse admission to a child of a married same-sex couple. Lawyer Albertos Polizogopoulos represented the school in the case. He says the school received an admissions request into their pre-school program, but early in the call, the applicant told the principal she was in a same-sex relationship. He says the principal informed the caller of the school’s position on sexuality and traditional marriage. He says the caller never requested or filled out an application form, and was never denied admission for the child. Nevertheless, they filed a complaint under the Ontario Human Rights Act, alleging discrimination on a number of grounds, including sexual orientation.

But in the end, Polizogopoulos says the Tribunal found that Section 18 of the Ontario Human Rights Code applied in this case. “Section 18…is for fraternal, philanthropic, religious, or cultural/ethnic groups. So for example, if I run a Greek club, it’s not inappropriate for me to require all members to be Greek.” He says the Tribunal ruled that the school was “clearly an organization that benefitted from that exemption.”

ARPA has been watching the case closely. Law articling student Tabitha Ewert, who works in the Ottawa office, says the decision did generate some misunderstandings which needed to be set straight. “We posted an article on the decision on our Facebook page, and we got a lot of comments like ‘How is this loving the child? How (does this line up with) Jesus saying ‘let the little children come unto Me?’” She says there were accusations that the ruling was “hurting the LGBT parents’ child, in order to preserve an elitist Christian school.” However, she says that criticism just isn’t accurate. “No one is saying that the child can’t come to Jesus, but the fact is that admitting him into the school is not the way to do that. It’s not loving to the child to have the child be taught one way in school and another way at home, especially on something as fundamental as a definition of marriage.”

The window for an appeal of the ruling has now passed, but the Ontario Education Ministry has issued a statement saying it is “reviewing the decision.”

The Edmonton Public School Board has backed off a motion that would have forbidden staff from disclosing to anyone – including parents – the names of children who chose to participate in Gay-Straight Alliance Clubs. Theresa Ng, who blogs at Informed Albertans, says the motion pushed to implement the policy right across the province.

Ng pointed out, “If (the) Edmonton Public (School Board) had passed this kind of a motion, then…the Minister of Education could say ‘Oh, well. We are being asked to do this.’ But I think it’s by no accident that the person who (put) forward this motion just happens to be an NDP constituency president in Edmonton.”

In the end, the motion didn’t pass for procedural reasons. This case won’t come back for consideration until late October.

The group Parents for Choice in Education is getting involved in the Alberta school board elections in a big way. Director Donna Trimble says they’ve put a questionnaire up on their website directed at all candidates running in public and Catholic school elections in the province. She says lots of other groups are being invited to review those questionnaire responses as they inform their constituents on education issues. Trimble admits even posting the questionnaire has raised some concerns in some quarters, but she says this isn’t about being popular, “A lot of organizations don’t want to be a target of the name-calling and the rhetoric and the unfair branding, (but) we’re willing to…take on those ‘hits’ from individuals that want to say that we’re about anything but (parental) choice.”

Trimble says even people who don’t have kids in the public or Catholic systems need to get involved in this round of trustee elections, because there’s a lot at stake. She says they often hear from people who think the election isn’t relevant to them because they don’t have children in either the public or Catholic school systems, but “the bottom line is that (there are) school boards in the province that are pushing for changes in legislation at the provincial level that will impact every single school, including independent and charter schools.” Because of that, she says, it’s “really, really important that the citizens of Alberta take advantage of their democratic ability to choose trustees that will stand up for parental choice in education.”

The candidate survey can be found online, here. The school board elections will be held on October 16th. (Note the audio states October 21st, but the correct date is October 16th).

There’s been some pushback against a pro-life float at the Fall Fair parade in Smithers, BC. We told you about the float on Lighthouse News last week; it featured a big cardboard cake with the words “every child deserves a birthday.” The float was well-received at the parade, but there’s been some controversy since then. One woman, who apparently wants to remain anonymous, wrote a letter to Smithers Town Council, demanding that the float be banned from next year’s parade. The letter reads: “A parade is not the time for religion or political statements; it is time for celebration, community, and togetherness…I implore you to invoke a regulation in all future community events prohibiting political or religious statements for the sake of the community.”

The request came to the Town Council meeting last week, but before that happened, local pro-lifers – who had become aware of the request – sent a number of letters of their own to councillors on the issue. They also showed up for the meeting. You can watch the resulting debate online at Mayor Taylor Bachrach’s Facebook page, starting at about the 1:06:00 mark.

In the end, Town Council decided the request was beyond its jurisdiction to grant.

Jessica Vandergaag is part of the pro-life group in Smithers. She says her group’s letters, and the fact that a number of supporters showed up at the Council meeting, are proof that political pressure does get results. “I think having an audience there really made a difference. To show them, ‘We’re watching, you can’t just put stuff through.’” She says Council made the right decision when it comes to jurisdiction, and the next step for her group is to keep up the pressure on the Fall Fair Committee – which actually controls the parade – to ensure the same result.

LN Feature: Got Pulled Over

The State of Colorado is considering a ballot initiative – a referendum – on the idea that traffic ticket revenues (the fines that are paid for things like speeding), should be paid to victims of specific offences, or donated to charities. On the feature this week, we talk with Reformed Perspective editor Jon Dykstra about the proposal.

LN: “What if speeding tickets were paid to charities?” That was a headline in a recent edition of Reformed Perspective magazine; a column written by Jon Dykstra. Jon, this kind of caught my eye, partly because it’s kind of a bit lighter than the normal stuff we do on Lighthouse News, but what an interesting concept.

JD: Well I guess the thing that caught my eye is the idea that we don’t always think about how God’s Word applies to all of life, and if it’s gonna apply to speeding tickets – if it can apply there – then we know that it’s relevant everywhere. So I thought that would be a fun take on it.

LN: So how do we apply God’s Word to speeding tickets in the context of donating this stuff to charity?

JD: Yeah. The writer who was tackling this initially – Steve Kerbel, who’s putting forward this initiative – is a Libertarian, so he wasn’t thinking of this in any particularly Christian manner. But it did strike me as running up against – or running alongside – what Paul was saying in II Cor. 8, where he’s gathering money for the church in Jerusalem, and he outlines how he’s making sure that nobody can accuse him of mismanaging this money. So it’s not just that he wasn’t mismanaging this money, he wanted it to be readily apparent (so) that nobody could even make that accusation. And so we often hear, with these photo-radar posts, how people talk about them as “cash cows”, and wondering if the government is just setting them up here and there to increase their revenues.

Well whether they are or not, the way that they’re set up does leave them open to that accusation. So his initiative kind of shuts that down. If they’re not making the money from these photo-radar spots, then no accusation can be made that way.

LN: So you talk about Mr. Kerbel’s initiative. Just by way of background, they’re actually voting on this in Colorado, right?

JD: Yes.  So he found one municipality in particular in Colorado was raising $600-thousand dollars through speeding tickets, which accounted for more than half (of) their municipal budget. It’s not usually that notable, but in Edmonton – more on our side of the border – they can make tens of millions (of dollars) from the photo-radar going to the police revenues.

LN: So this kind of goes to the issue of transparency to say “You know what? Yes, government is there to set up the regulations – speeding is one of them – but there shouldn’t be a perception that the government is doing this to fatten its own coffers.”

JD: Exactly. The law officers are kind of under attack in a whole bunch of different ways, and we want to foster respect for them; for what they’re doing. And one way to do that is to make it obvious that they’re “here to serve and protect”, and not, as one writer put it “here to fine and collect.”

LN: Is this gonna go anywhere do you think? I mean, the Colorado initiative? I remember Proposition 13 in California was the start of this property tax revolt wave. Is this sort of the new edge of that kind of activism?

JD: You know what? I don’t know. I would love it if it did, but the reason I featured it in Reformed Perspective was because I think (that) even in our circles, we don’t really think about God’s Word applies to all of life. So we think, you know, what does God have to do with math, or my entertainment choices, or speeding tickets? And we get to think His thoughts after Him, so it’s fun to see how relevant God’s Word is to every aspect of our lives.