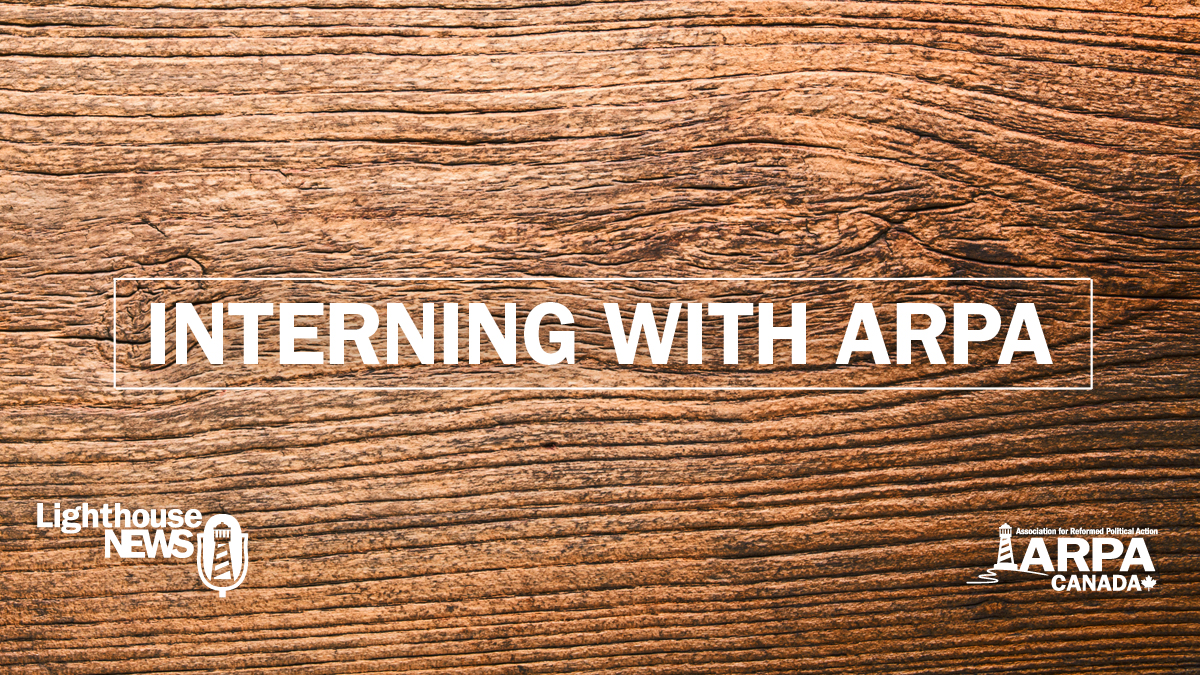 On the feature this week, an interview with intern Nick Suk. Last week, he wrapped up a 6-week internship at ARPA Canada’s Ottawa office. He weighs in on the state of Christian political activism in Canada, and on the impact ARPA is having on the tone of political debate.

Debate on Bill C-14 – the government’s doctor-assisted dying bill – continues this week. Last week, Conservative senators used their majority to loosen the restrictions on medically-assisted suicide by opening up the process to those with mental illness. The entire process, according to one senior senator, could take weeks or even months to be sorted out.

The second round of debate on MP Cathay Wagantall’s Bill C-225 – also known as Cassie and Molly’s Law – has been put off till September. We Need a Law’s Mike Schouten says the delay gives supporters of the bill more time to lobby their MP’s over the summer break.

Cardus Family has released the results of a new survey on the state of families in Canada. One surprising finding is that most people would like to have more children than they’re actually having and the reason they’re not is because they think children are too expensive to raise.

ARPA lawyer André Schutten was back in court last week on the Trinity Western University case – this time in Ontario. Virtually all sides in the debate over Trinity’s “Community Covenant” now concede that the case – which is also being argued in BC and Nova Scotia – will ultimately end up before the Supreme Court of Canada.

Al: On the feature this week, a bit of a change of pace. Instead of looking at policy or legal issues, the really heavy stuff that we’ve been doing for the past few months. Today I thought it would be interesting to get a fresh perspective on ARPA’s work in Ottawa. A fresh perspective from someone who’s in a unique position to bring that. Nick Suk, he’s going into his fourth year as a political science student at Brock University, in St. Catharines, Ontario. Last Friday he wrapped up a 6-week internship at ARPA’s Ottawa office and I wanted to get his impression of the work that was being done there. I started out by asking him how he ended up in the internship position and what kept him busy since he started in late April.

Nick: Two years ago I contacted ARPA Canada, just because I was aware that they did summer internships in the past from when I was at high school, at Heritage Christian School and, ARPA always visited our school for a little bit. So I was aware of what they were doing, who ARPA was, and I was always kind of interested. I’m studying political science at Brock University, so I’ve always been sort of interested in the political arena, as well as engaging with that from a Christian perspective. So, I contacted ARPA a couple of years ago, asking if they would have anything available, and that summer they didn’t, but they asked me to contact them this January. And I did and it turned out that all the pieces fit together and it worked out and they were able to have me. So, basically in terms of my responsibilities, I have been doing a little bit of grunt work here and there, but I’ve been able to attend several events and several meetings and be able to reflect on those by writing articles, for ARPA, that have been up on the website. I was here for the God and Government conference in my second week, and so with that I was helping a lot with the organization, and just kind of being that run to and from the office type of guy. Also, to be able to go to meetings with Members of Parliament, and be able to join the delegates with lobbying on behalf of ARPA.

Al: You’re a young guy, you’re interested in politics and in public policy. This would seem to be a pretty nice fit for that kind of thing, for a poli-sci student. What did you learn? I mean, where there any surprises? You had some expectations, obviously, when you walked in, now you’re done. Compare the Nick who walked in there 3 months ago, to the Nick who’s walking out today. What were some of the surprises?

Nick: I’ve already said it to a couple people – I think I’ve learned more about politics in these six weeks than I have learned over 3 years at Brock with political science, so far. That’s been so far the most rewarding aspect of the internship, is that I actually get to view the political world here in Ottawa, and see what politicians do, how they address issues, how the committee works. A lot of that aspect of it has been really rewarding. But, as a political science student whose interested in this type of thing, especially from a Christian perspective, I’ve always been told, when I say I’m interested in going into politics, they always say, “oh you got to be careful as a Christian in politics, you know, don’t necessarily jump into that field, sometimes you have to compromise your faith.” To me that’s always kind of been a barrier for Christians to get more involved in politics. Something that I’ve seen, with the Christian politicians here in Ottawa, is that they haven’t necessarily compromised their faith. You know, they’re so emotionally attached to some of these bills, that they have a deepened love for their God and Christ, because they’re engaged with so many policies that tend to counter what his word says for them to do. So that’s something that has been really real to me, is the emotional attachment that Christians have to this political world, and the importance of getting involved in something like that from a Christian perspective. So I think as a Christian who’s interested in politics, that’s definitely been my favourite part about this experience so far.

Al: You say you learned more in the few months in the internship than you have in 3 years in a poli-sci program at Brock. Are we talking the mechanics of how things work? Or are we talking about, sort of the, back-room politics and how things actually work, how to effectively lobby, and that kind of thing?

Nick: I would say it’s a little bit of both. It’s easy enough to learn from a theoretical perspective, the machinery of government and seeing how bills go forward, how policies are changed, the effectiveness of non-government organizations or lobbyists, organizations such as ARPA. It’s easy to know it from a theoretical perspective, but to visibly see that action going forward, has been more beneficial for it to stick in my mind, to actually understand how it works. So I think in that essence, that’s how I’ve learned more in these past couple months in relation to politics. As well as just how to lobby, how to engage with your politicians, the best ways of approaching some of these issues, the best way to contact your Members of Parliament, and what to discuss with them – isn’t necessarily anything that you learn in a political science program, because nowadays, I mean especially with university-streamed education, it’s all very theoretical, especially in the social sciences. You’re not necessarily actively pursuing any of these interests, so you don’t get a visible reference point to what it is, and what it is going to do for you, and what you need to know, and how to be prepared for it. So I think going into my final year of political science next year, I’ll have a better realization of what is involved with the political world, and how to approach politics.

Al: The effectiveness of expressly Christian political lobbying, I mean that’s what ARPA does…all the issues are looked at through the Christian worldview lens. A lot of Christians look at it and go “you know what, I mean I’m pro-life and I don’t like Bill C-14, but these people aren’t going to listen to me anyway because Parliament is a secular institution”. What’s your impression after spending some time there as an outsider, in terms of the effect that that kind of lobbying can have on Parliamentarians who may not share our worldview?

Nick: Especially during the God and Government conference, it was something where you’re obviously teaching regular people how to lobby, how to engage with politicians. With the amount of delegates we brought forward, and the amount of people who were actually able to sit down and talk with different Parliamentarians from different parties, the kind of realization dawns of you that what is effective is Members of Parliament do actually want to engage with either members of their constituency or just regular folk who have issues with some of the policies going forward. And they do often listen intently. You’ll get certain members who are so polarized on their policy that they won’t budge on anything. But I know that for example one of the delegates had such a good conversation with one of the Senators, that when they visited her at a committee meeting for the Senate, she particularly almost quoted one of the worries that they had in their private meeting in front of all the other Senators. So, when you see that, you see a direct benefit for our Christian lobbyists to actually engage with Members of Parliament or Senators. That’s something that you don’t really realize until you actually go out and perform some of your own lobbying efforts. I think what ARPA has been doing is effective in terms of really changing the minds of some of these members, or at least creating a voice for Christian beliefs in our government.

Al: So Christians can be heard?

Nick: I think so, definitely.