A Closer Examination of Transgender Rights 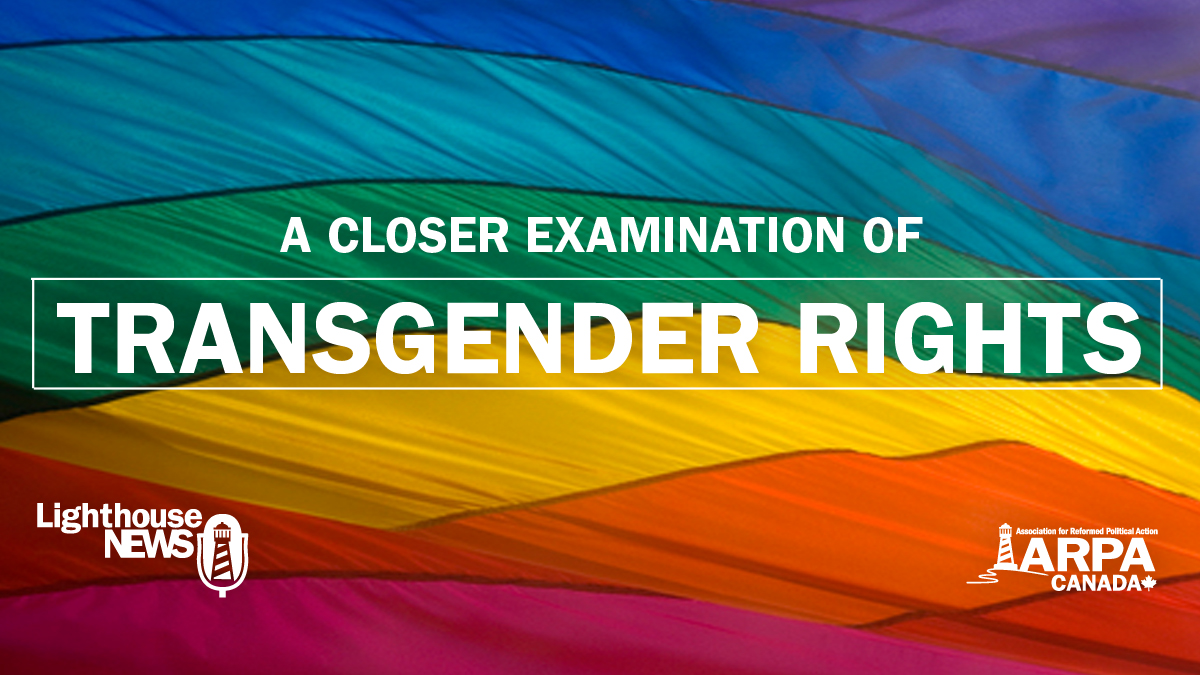 On the feature this week, we have an interview with Dr. Scott Masson on what he believes is driving the recent push for transgender rights in North America.

The City of Hamilton, Ontario, has removed several bus shelter ads that had been bought and paid for by the Christian Heritage Party; ads which questioned the city’s official bathroom policy for transgendered people.

A disturbing story about selective reduction abortion. That is when a woman who has undergone fertility treatments decides she’s pregnant with more babies than the wants, and chooses to abort one or more of her pre-born children. We speak with Cardus Family’s Andrea Mrozek about a disturbing case out of Ottawa. Mrozek has blogged about the story here.

And WeNeedaLaw’s Mike Schouten weighs in on yet another example of the inconsistency between the way the legal profession and the medical profession treat the pre-born; a case where a pregnant woman died in a car accident, while emergency crews did everything they could to save her unborn child.

On the Feature Today,

Al: We’re back on the program. Over the summer the Ontario government made a major move in the area of so-called transgender rights. It’s decided it will no longer classified gender on marriage licenses and will start issuing driver’s licenses and medical cards without any specific gender on them, if people ask for that. To talk about this development I have reached Dr. Scott Masson, he’s an associate professor of English at Tyndale University College of Toronto. Dr. Masson welcome to Lighthouse News.

Dr. Masson: Thanks and great to be with you.

Al: This whole issue of the transgenderism in Ontario has now moved into ID that is being issued by the government. You can get a driver’s license or and OHIP card without specifying gender anymore. First of all, what are some of the practical implications here, I mean obviously there’s got to be some issues when you issue a driver’s license with no gender identity.

Dr. Masson: Oh man yeah, I mean it’s hard to know where to begin here. It’s trying to deal with a genuine issue, people who suffer from gender dysphoria. I mean 41% of these poor people try to take their lives at some point, but the studies show that when actually you change your sexual identity and have successful surgery the suicide attempts go up – so affirming people in that seems to me to be counterproductive to begin with.

But the specifics of this: what happens if I get pulled over and whatever I got pulled over for is going to land me in prison. Where is the police officer going to put me? Are they going to put me in with men, women? There’s no gender-neutral cell. I’ll have to be put in with one or the other and in either case I think there’s going to be some problems not just for the gender neutral identifying person but for the others, and we can see this playing out in various spheres right now both in public life and in private life. There’s these gender inclusive washrooms and changerooms which are being put in public schools and in other public squares – my question on that is simply if these are truly inclusive, then why are they not recognizing all the various distinctions in gender or sexual differentiation? They’re not actually inclusive at all they’re getting rid of differentiation and calling it inclusive. So it’s got the label of ‘inclusive’, but what it’s doing is it’s excluding male and female sexual differentiation.

Now the effect of getting rid of these sexually differentiated washrooms, changerooms, etc. is to get rid of all personal privacy for men and women, women in particular. I think this is going to hurt women and their sense of safety in public spaces more than anyone. It’s going to allow predators access to these places. I’m not talking about the transgendered people, I’m talking about people in general. If I as a man can walk into a women’s washroom and say I’m a woman, people are going to feel like they can’t say anything. So it’s allegedly inclusive, it’s allegedly fair, it’s allegedly ethical but I actually think it’s not helping the patient so much as it is curing the doctor, if you can forgive the analogy. It’s compelling us to be blind to the things we can see with our own eyes.

Al: What’s the underlying issue here, I mean what’s really going on and what does it tell us about the state of our society?

Dr. Masson: Oh man, okay. I’ve been thinking about this for a long time. The clear thing that’s going on, and I think everybody can agree to this: the state is going well beyond its historic mandate. I don’t think it’s far fetched to say that this is playing God because what we’re doing by making this gender-neutral, sexual identity, orientation whatever you want to call it, you’re determining what human nature is. That’s what the state is doing so that’s the first point.

In that process they are seeking to, and I think this is an explicit agenda if you look at the writing on it, they’re seeking to eradicate what is normative about human nature which is binary sexual differentiation, so male-female, and since it’s the government that is doing this they’re leading a rebellion against the very nature that God has ordained for human beings and they’re also thereby leading a rebellion against the normativity of the procreation of the human race. We’ve made the act of a man and a woman normally creating a family, procreating, we’ve in some ways by the inclusion we’ve excluded that as a normal thing. So in seeking the fair, ethical and equitable treatment of people who are, as I said at the outset, clearly psychologically distressed and in need of help, what we are seeing is that a homo-normativity is being imposed on the entire populace by our government. When I say homo-normativity, I’m not referring to homosexuality, I’m using the Greek adjective ‘Homo’ which just means ‘the same’, as the norm for everyone – everyone is treated as the same. So in the policy which they call inclusivity what we’re doing is excluding the male and female binary differentiation. The consequences of this are serious and profound because it’s not only that our identity is male and female, which has the most basic implications for our personal interaction with others, it’s not only that that has been sort of blotted out so that we should disregard it as if we could do that, or if the government could do that just by fiat decree. The more insidious implication that we will be prosecuted and persecuted if we want to hold on to that is an attack, Government lead, on human nature. And of necessity that presses the political and the public sphere into the realm of the family and the private sphere. This is the further implication, I’m just digging down on this, the government has just tacitly stated in this simple matter of health cards and driver’s licenses that the realm of the family and of the private sphere is its direct concern and it is legitimate for them to directly involve themselves in that area and that means that it’s pushing itself right into the family saying that it has authority and legitimacy. Now there is an implication that it has an authority and legitimacy in the creation and nurturing of children.

Let me get back now to the economic aspect of it, why is this all going on? Why are the high tech companies and the multinational companies seemingly kowtowing to this? It seems to me that what is going on here is the technological commodification of people, and it’s big business to make of mankind a thing that can be commodified, can be enhanced, can be perfected, whether it’s by biotechnology, or through miniaturization, or through supplementation – so transhumanism the perfection of human nature – or if it’s just trying to get rid of it altogether. This is the insidious part of the agenda and it is totalitarian. The person that is the key thinker on this is Hannah Arendt. She wrote a work in 1951: The Origins of Totalitarianism, and I’m going to read the direct quote here she said that the aim of all totalitarian ideologies is, and I quote, “not the transformation of the outside world for the revolutionizing transmutation of society, but the transformation of human nature itself.”

Al: You almost sound like a conspiracy theorist, forgive me.

Dr. Masson: I understand that but let me look at the clear implications of this, to be male and female is to be human. The first thing you ask a person when they’ve had a baby is “is it a boy or is it a girl?” and as a consequence we’ve got a whole system of rights that have been established based on that personal human nature. They’ve been hard won if you look at human history the idea that every person bears the image of God pushes strongly against the idea that the state is lord over them. It was a case in Rome, it’s been the case all over the world. These are human rights, they’re personal rights, we have the rights as persons before the power of the state and the state is limited in its power and authority. Modern technology has allowed us to empower scientists and government workers to be able to gain power over human nature and to redefine it. So it’s the technologically-empowered totalitarian state version of Sodom and Gomorrah.

If you want to talk about conspiracy, let’s go full in on that: the reason I say it’s Sodom and Gomorrah is because where the family and the private sphere have no sanctity, and privacy will not to be acknowledged as a legitimate good – and that’s what’s going on in the washrooms and elsewhere – there can be no hospitality because the home is the place of hospitality. Remember in Ezekiel 16:49-50 that’s what the reason is given for striking down Sodom and Gomorrah. It’s not the homosexual act per se, although that’s a part of it, the fact that the sanctity of the home has been given no sanctity in Sodom and Gomorrah. They’re actually going in and they’re going to violate the privacy of that persons’ home. I think that’s exactly what is going on here, that the privacy of every family is at risk when a male-female human nature that comes out of the family is not being recognized. The public sphere has totally swallowed up the private sphere. So could I make it more alarmist than that? No, but I actually see that that is exactly what’s going on here.

Al: Dr. Masson, very enlightening we’re out of time. Thank you so much.