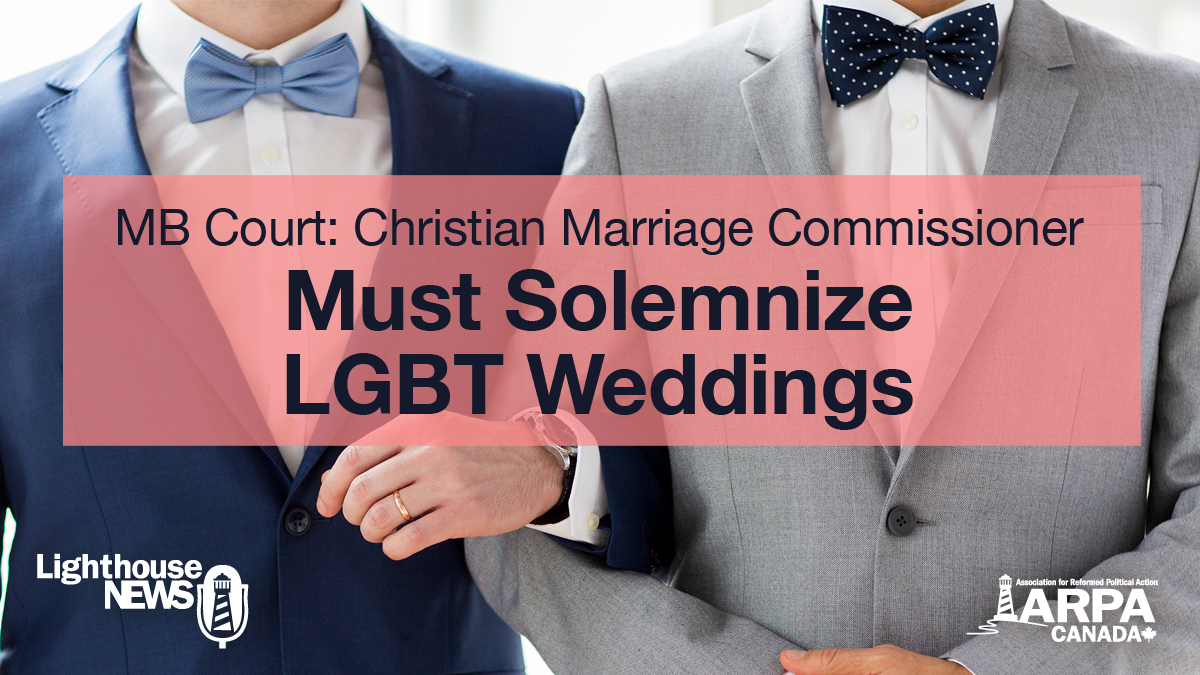 Who’s teaching the teachers? The Alberta Teacher’s Association brings in a controversial sex-ed proponent as a keynote speaker for its Calgary teachers’ convention.

The highest court in Manitoba has issued a ruling in a case involving same-sex marriage. Specifically, the case centred on whether civil marriage commissioners have a constitutional right to refuse to perform same-sex ceremonies. The Manitoba Court of Appeal says they don’t.

Kevin Kisilowsky had taken the Manitoba government to court after he was ordered to give up his commission because he refused to perform same sex ceremonies. Mr. Kisilowsky was represented in court by lawyer Jay Cameron from the Justice Centre for Constitutional Freedoms.

LN: Mr. Cameron, can you give us some background, some history on this case? How did this all get started?

JC: Well Mr. Kisilowsky was a private guy. He’s not a minister, but he works for a ministry whereby he ministers to street people; gangs, people who normally aren’t serviced by a church. And in the course of that ministry, he would encounter people who – because of conviction – decided that they should get married. So he found himself in a position to, you know, be officiating these services, and he was having to have somebody else come in to do the legal part.

And so he applied to be a private marriage commissioner in 2003, and he told Vital Statistics in Manitoba upfront that he was comfortable only doing Christian services. That he didn’t want to marry Wiccans or Hindus or atheists. And they said “No problem. As a private marriage commissioner you have the option of being put on a private list.” And he was put on a private list, that’s been established now. His name was kept out of general circulation, and he wasn’t accessible to the general public. He would just perform marriages in the course of his ministry, where it was necessary.

And everything was fine. You know, there was no conflict between the rights of Wiccans or Hindus or atheists or any other demographic of people – until 2004, when the province of Manitoba decided that same-sex marriage would be legal. And on the same day that decision came out – in a case called Vogel – all the marriage commissioners in the province were instructed that they must begin to marry same-sex couples. And in that same letter – on the same date – they got rid of the private list that Mr. Kisilowsky was on, right? So basically they threw all the people who were on the private list into the public list. Made them accessible to everybody, and said “Now you have to marry whoever comes to you.”

And so that’s essentially the foundation of the case. They [the Manitoba government] told him he had to turn in his licence. He refused, and he sued for a declaration that Section 2(a) of the Charter [freedom of religion] was infringed by requiring him to marry same-sex couples.

LN: I’m looking at the ruling here, [https://www.canlii.org/en/mb/mbca/doc/2018/2018mbca10/2018mbca10.html] and one of the things that intrigues me – because you’ve already touched on it – Paragraph 10 of the ruling says that “Manitoba denies that there ever existed a private list to perform only Christian marriages.” However, they do admit there was – at the time – a public list of marriage commissioners and a list of people who didn’t want their names to be made public. Is that part of the central dispute here?

What’s interesting about that is that there was an accommodation for people who didn’t want to be on the public list for whatever reason. Whether that reason was religious, or whether that reason was privacy, or what have you. There was a private list, and there were people on it. Mr. Kisilowsky was on it. That’s established fact.

What is also established fact is that Manitoba decided – when same-sex marriage became legal, this is the catalyst – that it would get rid of that private list in order to compel all marriage commissioners to marry same-sex couples. And so that’s a central issue in this case, because they didn’t have to do that. They decided to do that.

And, you know, that’s big, right? Because it created the conflict. There wasn’t a conflict before that, and what we’re saying is that in a free society, where you have people of a variety of different beliefs – about marriage and sexuality, God and atheism and agnosticism – that in such a society, if gay people want to get married, it’s legal in Canada. There are lots of people who will perform the service. That’s the law. But on the flip side, if there’s somebody who doesn’t want to perform the service – because of their particular perspective on morality or the teaching of a particular religion – that in a free society those rights should also be accommodated. And the amazing thing is that in this case, they were accommodated. The private list was an accommodation, and Manitoba decided to cease that accommodation. Now what we’re saying is that that was an act of discrimination.

JC: Well, there’s a number of different facets. The Charter jurisprudence – the law from the courts – says that you can’t have a hierarchy of rights in regards to Charter rights. And that in the event of a conflict, the proper thing to do is to delineate the rights, or classify the rights so that you don’t have a conflict. So you treat them in such a manner whereby you accommodate both rights. And what we’re saying is that that private list accommodated those rights, and the only reason there was a conflict – if there was a conflict – is because Manitoba decided to get of the private list.

So Mr. Kisilowsky – before same-sex marriage became legal – he wouldn’t marry all sorts of people. And Manitoba was just fine with that. He wouldn’t marry atheists or Hindus or Muslims or agnostics. He wanted to marry only Christian people. And Manitoba was fine with that. They accommodated that. And he was on a private list because of that. And there was no evidence of harm to anybody. But as soon as same-sex marriage came in, all of a sudden there’s a harm to that particular demographic; that’s what Manitoba is arguing. And so they created a hierarchy of rights where same-sex rights or LGTQ rights are at the top, and everybody else’s rights are underneath. And that’s not how Canada is supposed to work.

We see that playing out in other areas of society these days as well, right? In a free society, you’re supposed to have your own opinion. To speak your own thoughts. To have your own beliefs. To teach, to express, to live. And more and more, what’s happening is that your right under Section 2 of the Charter to disagree with certain popular cultural trends is being limited in favour of those trends. And that’s not how the constitution works, or how it’s supposed to work.

LN: So this is being appealed to the Supreme Court of Canada now?

JC: We’re contemplating an appeal. You don’t have an appeal as a right in Canada, with this case. You have to ask for leave to appeal, and we are contemplating whether or not we’re going to take that step.

Who holds the keys to the kingdom of heaven? Part 1 of 3
By using our site, you acknowledge that you have read and understand our Cookie & Privacy Policy