The nations rage, yet God is sovereign 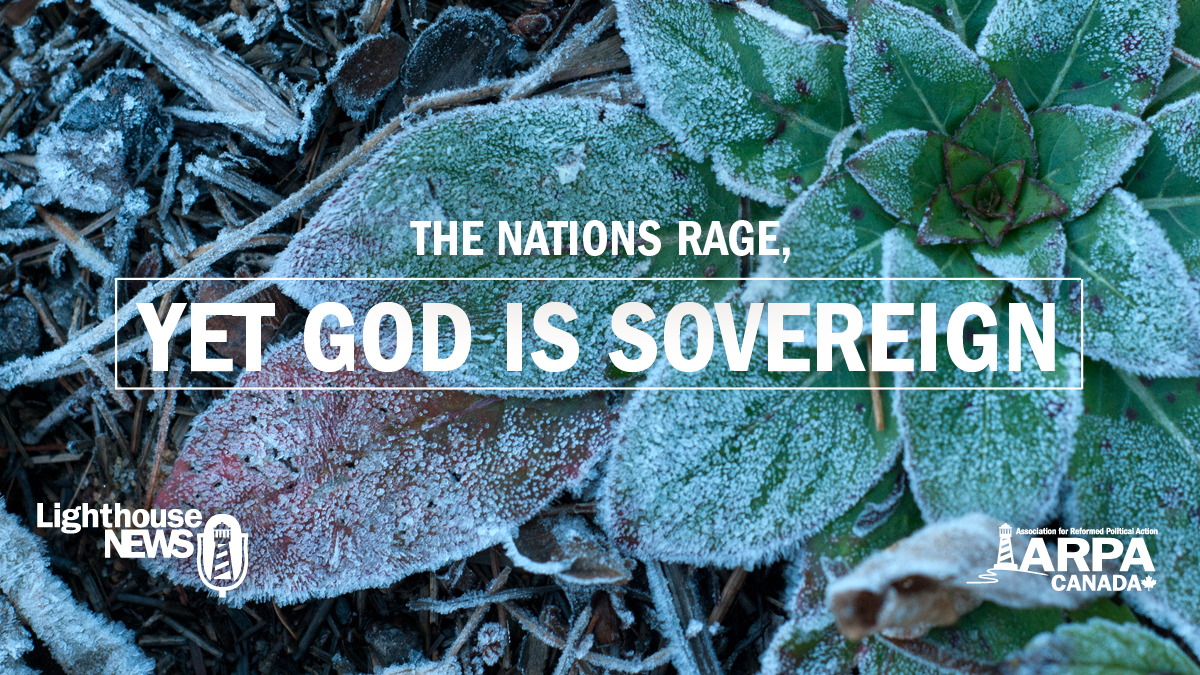 It’s the middle of summer. Parliament is in recess and there’s not much happening politically across the country.

One thing you should know is that ARPA has been granted intervenor status before the Supreme Court of Canada in Trinity Western law school case. That approval was given in the last week of July – the case is scheduled to be heard in late November, with a judgment expected next spring.

But beyond that, it’s been pretty quiet on the news front. Which gives us an opportunity for a special, full edition of the program.

And this week, we’re featuring a sermon that looks at our culture and our social responsibility, in the light of Psalm 2. The Psalm reads, in part:

“Why do the nations rage, and the peoples plot in vain?

The kings of the earth set themselves, and the rulers take counsel together,

against the Lord and against his Anointed, saying,

‘Let us burst their bonds apart and cast away their cords from us….’

He who sits in the heavens laughs…

Now therefore, O kings, be wise; be warned, O rulers of the earth…

Serve the Lord with fear, and rejoice with trembling.

Kiss the Son, lest he be angry, and you perish in the way.” (ESV)

The sermon was preached back in February. It’s by Pastor Edgar Unrau of the Calvary Baptist Church in Chemainus, BC.

We’ve edited it for length; you can hear the full version online, here.

Psalm 2 gives us information on how to understand the world from God’s perspective, which is reality. Reality begins and ends with the Lord, and has everything to do with the Lord. That’s reality. Here we see that all the people of the world rebel against God. Yet God remains God; He remains sovereign, and brings His plan to fulfilment. That’s kind of the big picture going on in this chapter. But let’s go through it more slowly.

Verses 1 to 3: The nations – their leaders, the entire population – all the citizens of earth, rebel against God. They are set against the Lord. This isn’t just a certain group of people or a class or a country or a political party or confined to just “really, really bad people” – not the “nice people”. This is everyone. They gather together, they share their wisdom, and they counsel each other on ways of going against God and his Anointed One. And the Anointed One in Hebrew means “the Messiah”, and in Greek it means “Christ.” So humankind rages and plots against God. And as verse 3 says, “no bonds, no cords holding them”, keeping them from anything or influencing them.

But God is not worried. God is sitting in heaven, laughing. Creatures shaking their fists at the Creator Lord is laughable. Their raging and rebelling and trying to put God in His place and loosen themselves of God and all that is about God, that’s all laughable. He’s laughing at the rebellion which people think is leading to freedom and to joy, but it’s leading to destruction. God is sovereign.

And then there’s a beautiful word. Starting in verse 10. “Therefore.” Therefore!

Verse 10 to 12: Because of the rebellion of every single person – because God is God, and the rebellion will be put down – here is what you do. This is amazing; the incredibly gracious, merciful loving God – the Holy God – reaches out His hand to the rebels and gives an invitation to life. He says (verse 11-12) “Serve the Lord with fear and rejoice with trembling. Kiss the Son.” There’s only one acceptable response to the great King, the Lord. And it’s submission. Submission. Serve the Lord. The only hope in everything for our salvation and everything is embracing and taking refuge in Jesus Christ. Trusting Him and His finished work on the cross. Jesus will deal with the world’s rebellion. There is no safe place for evil to hide. Refuge is only in Jesus.

So all people are born sinners, claiming to be their own God. And we reject God; reject the idea of God being God. We want to free ourselves from that, and so we rebel against God so that we can do whatever we want to do, and whatever we think is right and whatever we think will bring joy to our lives. But that rebellion that we think is freedom is (actually) slavery to sin. That rebellion will end. There is no freedom from that reality. There is no escaping the reality that God is God, and judgement day is coming. The Lord powerfully and decisively put Jesus on the throne, and has given Him all authority over every single person. Everyone.

Number one: We can embrace the living hope who is Jesus. Don’t be scared of the raging, plotting world; what you see and what you hear on the news. Jesus is the fulfilment of this Psalm. God appointed Jesus to rule. He will ultimately subdue all His enemies under His feet. The raging of the nations? That will cease. God’s peace will rule over hearts and lives of people. That’s the reality. His judgement is coming. Grab onto it. Don’t let go of it when you’re watching CNN or CBC.

Number three: Pray for those Christians who are under authorities that rage against the Lord. You know, there are so many Christians around the world who are truly being persecuted. We’re not getting persecuted in Canada; don’t even try convincing yourself of that. There are brothers and sisters in Christ who are losing jobs, they’re losing their homes, churches are being bulldozed, their freedom is being taken away, they’re getting killed, their families are getting killed. Pray for their safety. Pray that their faith and trust in God increases. They are suffering under the raging nations; those that are raging against the Lord. Pray for them.

Number four: Get the right perspective on the world from this passage. So rebellion is everywhere. There is scheming among all nations. God’s judgement is coming, which means we are not going to make this world Christian. God is sovereign, He’s saving people, He’s making them not “of this world”, but “in the world”, and therefore we need to approach the world knowing we will not make our culture Christian. We won’t do it! There’s a lot of people that think that “Oh, we’re gonna make this nation a Christian nation, we’re gonna make our province a Christian province, we’re gonna make our town a Christian town.” It’s not gonna happen. But God is saving people within all those places, and he’s making them into new creations, and they’re influencing wherever they are. You and I, we are scattered in the world. We’re not of the world, but we’re scattered in the world to bring Jesus into every situation that we come into. We’re not making this nation Christian, but we sure are bringing the King of Kings and the Lord’s Kingdom into every place that we are. Make that distinction.

Number five: Bring the reality of God into every situation. Psalm 1 – in Christ, you are blessed. You know the truth from God, you know reality, so speak the reality. Speak the Gospel into the lives that are being lived in such a futile way. We must speak the Gospel of Jesus Christ. Listen, if you are saved, you have got to learn how to communicate God’s Word to people. That is a means by how God is saving people. By His preached Word, not just up here, Edgar, up here, but you, where you’re at. In school, in your job, at the soccer field, at the basketball court, wherever you are. Speak the message of Jesus Christ. Know how to speak it. Bring it into this lost and futile, rebellious world. Speak the Gospel.

Number six: Laugh with the Lord. This means we must see from the Lord’s perspective, which comes from His Word, the Bible. He is sovereign over the wicked. They are not untouchable by the Lord, or unchangeable. They are not God. Whatever you see any nation doing, they are not sovereign. You don’t put your hope in a new President, that he’s going to change a whole nation as if he’s God or the Messiah. He’s not! The Lord is the Lord; He is sovereign. Look at the situation here on earth through the Lord’s perspective, knowing that He is sovereign, and He will bring about His will. Laugh with the Lord.

Number seven: Be careful how you put down or look down on this wicked world. The same sin that gets them raging and plotting against the Lord is at work on you and me, and we fall for it. We do. The huge difference is, we are in Christ. Christ is the difference between us and the wicked world. So don’t look down on them. All we have to brag about is Jesus. Nothing in and of ourselves. And He has many more in this wicked world He will save. We have zero position of pride, looking down our nose at wicked people. We have nothing to stand on. We are in the grace – the undeserved grace – of the Lord in Jesus Christ. Don’t look down on the wicked.

Number eight: Know something about the wrath of the Lord. You know, I think we play down God’s love and God’s wrath quite a bit. We downplay His love, often reducing it to some silly romantic thing. And we do not think about – and hear about – God’s wrath. His holy hatred for sin. I’ve said it before, and I think I’m gonna keep on saying it for the rest of my life: We know nothing about God’s love unless we know about God’s wrath and His anger and hatred for sin. When we see how holy God is – that His holy justice must deal with sin – when we see how bad sin is, and that every sinner deserves all of God’s wrath poured onto them, then God’s love in the substitutionary sacrifice of his Son Jesus Christ – then we start getting how loving He is. That He would take our deserved punishment, and give us forgiveness. If we don’t understand God’s hatred for sin – and His justice demanding a payment for that sin – then we don’t get how loving His act was. He would send Jesus, and Jesus would take the wrath. That’s love! That’s love, and you’re not gonna know one without the other.

We are all “ragers”. We’re all ragers and plotters against God. But many of us have been set free from that slavery to sin by the life, death, and resurrection of Jesus Christ. The King on the throne. If you’re not, hear God’s word and surrender. Perhaps today is the day of salvation for you.

But for those of us that are in Christ, let’s love Him. Let’s “kiss the Son.” Kiss the Son. Let’s serve Him, let’s worship Him. Let’s take refuge in the Lord who is King over all.

LN Feature: Got Pulled Over