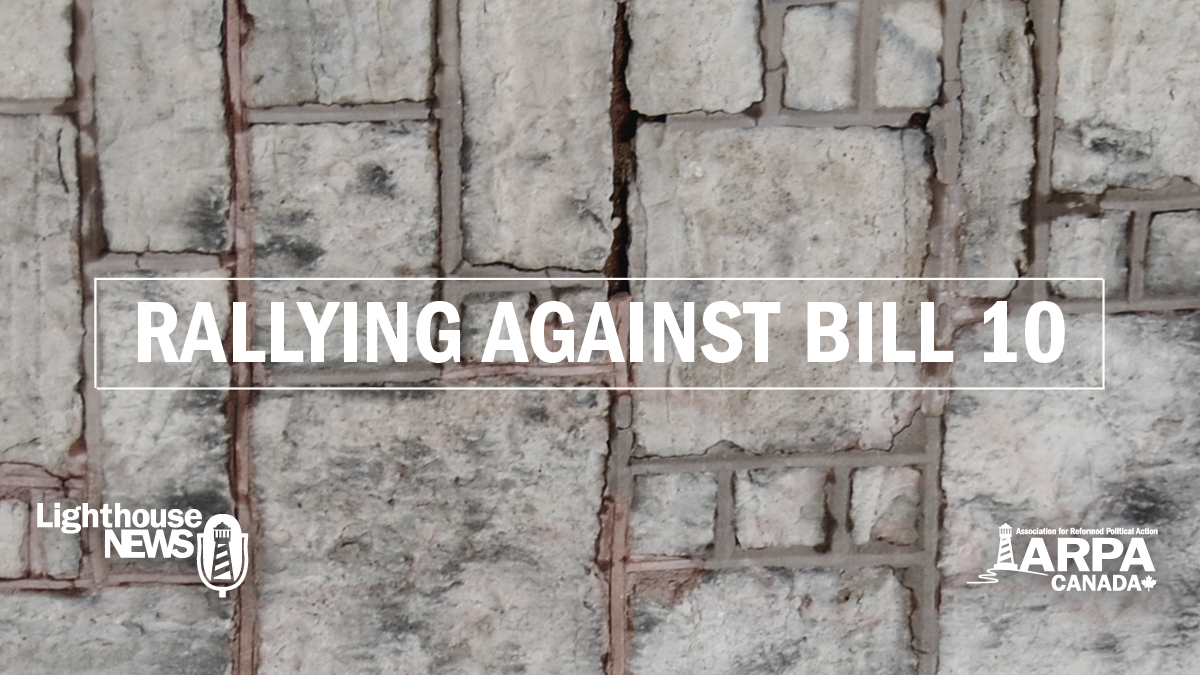 Alberta parents rallied in both Calgary and Edmonton earlier this month in a protest against recent changes to the Alberta Education Act, and the guidelines that the government is trying to impose on all schools. The law and the guidelines would, among other things, force all schools to establish gay-straight alliances if even one student requests them, and would also prohibit school staff from discussing a student’s gender dysphoria with parents, without explicit permission from the student. On the feature today, an edited version of a speech at the Edmonton rally on behalf of ARPA Canada by Reverend Tony Roukema of the St. Albert Canadian Reformed Church.

In the news, a look back at a raucous week in Parliament, including the now-infamous incident involving the Prime Minister’s elbow, as well as the status of Bill C-14 and a government attempt to limit the amount of input the Opposition parties could have on legislation and Parliamentary proceedings. Peace River-Westlock MP Arnold Viersen says the week was symptomatic of a style of government that is becoming all too familiar to Opposition MPs.

The government introduced a new bill last week to amend the Criminal Code and the Canadian Human Rights Act by entrenching “gender identity” as a prohibited ground for discrimination. We speak with ARPA lawyer André Schutten about the bill. We also reference a column from the Gospel Coalition website which you can read here.

And, the Conservative Party of Canada is holding its biennial policy convention in Vancouver later this week. Some pro-life groups are concerned that a number of expressly pro-life policy resolutions are not coming up for debate at the convention; they were pulled from the roster by the convention organizers. There’s an effort underway to change the Party constitution to prevent that from happening again. You can get more information on the proposed constitutional amendment here.

Announcer: And, we’re back on the program. Just over a week ago, thousands of parents gathered in Calgary and Edmonton in rallies against the Alberta government’s Bill 10. That’s the law that would strip parents of many of their rights in connection with the education system. Late last year the government released a set of regulations under that bill which included the notion that students would be allowed to go to school staff if they were experiencing gender identity issues and that those teachers would not be allowed to have a conversation with parents about those concerns unless they had the expressed permission of the child. Those regulations are envisioned to apply to all schools, including private and Christian schools. That’s what prompted the rallies.

ARPA was represented at the Edmonton event. Rev. Anthony Roukema, a pastor from St. Albert, just north of Edmonton addressed the crowd on the religious freedom implications of Bill 10. On the feature today, an edited version of the speech he gave. In the background you hear the carillons at the Alberta Legislature as the speech started just as those bells were going off to mark 3:00 on that Saturday afternoon. There were also a few dozen protesters at the rally who were in support of the legislation. While there weren’t many of them they were kind of noisy. You can hear them at times trying to shout down Rev. Roukema’s speech.

Rev. Roukema: We stand with you against those who see us as an obstacle to the development of our children. As a threat, because that’s truly what is happening here. Strip away all the political rhetoric, all the noise, what is being said with Bill 10? What’s being said is that you are to be excluded as parents This is the mandated exclusion of parents in the development of children. We would never accept this. No group would accept this, that they would be excluded from their children’s development. But this is mandated and as Christians we stand against this because we’ve seen it before, we know what this is. This is the government overstepping its bounds. This is the government undermining the rights of parents, undermining the responsibility of parents, the ability of parents, to raise their children and for us at ARPA, what is also concerning is that it is an attack on religious freedom.

The gospel is not dominated by our view of human sexuality and orientation. There is so much more to the gospel. But God’s word speaks to these issues and our responsibilities as parents and we will not jettison our views. We will not jettison what we have been said to do in God’s word, simply because it is unpopular or because those who would shout it down do not want us to hold those views.

Our hearts go out to those who struggle with sexual identity, with sexual orientation, but our response as Christian parents is rooted overwhelmingly in our relationship with the God who is there and who has spoken. Our response to our children is rooted in that relationship with God and in His vision for human flourishing. We believe as Christians that there is a God in Heaven and He is there and that He has spoken. We believe that in His Word the Bible, he tells us of what it looks like to truly love, to truly live. We live as Christians all of life following the God who so loved us, and to tell us to discard part of His word. When we are told to do this, we are told that our views are invalid when we respond to that. We are sending a message to our children that there are people who can bully us into submission. We are being told as parents that we must discard part of God’s word. Yes, you can follow your God, you can follow your God in your little homes, you can keep it to yourselves, but it cannot be consequential for the rest of your life. And as Christians we cannot do that.

Changes to the education act that were made by Bill 10 are forcing us to make a choice on whom we will follow. Do we follow the God who we love, who so loved us, or do we follow those who disagree with us, who believe our views are invalid and who wish us to disobey God’s Word, to not be true to who we are?

The parental task involves responsibility to raise our children according to our values and it is impossible not to do so. Anyone who says that they can raise a child without values has not thought it through. We rightly teach our children values. Whether you be Christian, Muslim, Jewish, atheist, gay or straight, you will raise your children according to your values. What you are seeing today is a conflict between two value systems. That is what it is, plain and simple. You see two value systems conflicting. You see one system being told that it cannot exist. We see our children are here today, what will they remember from this rally? They will remember that their values were shouted down. They will remember that their views are not respected. They will see that we have made our stand, that we love them and that we will stand for the values that we believe so true and so dear to our hearts.

As Christians one of the things that we hold dear is the command that God has given us to raise our children, and what we are seeing with Bill 10 is an undermining of the family. When there is brokenness a student may find a teacher who is closer to him or to her than his parents. And the school may indeed provide what is lacking in the home, but the answer is not to enshrine that brokenness in the education act.

We urge our government to help families, to include families, to build up families. Don’t weaken them by forcing a disconnect between parents and their children when it comes to sexual identity and orientation. Premier Notley, we pray for you. We pray for you, we respect you, God in His word calls us to do that too. And we respectfully ask you not to force us to make a choice between following our government’s position as expressed in Bill 10 and following the will of the God we love and serve.