I have a right to live! – Ontario refuses home care for man with terminal illness

27 Mar 2018 I have a right to live! – Ontario refuses home care for man with terminal illness 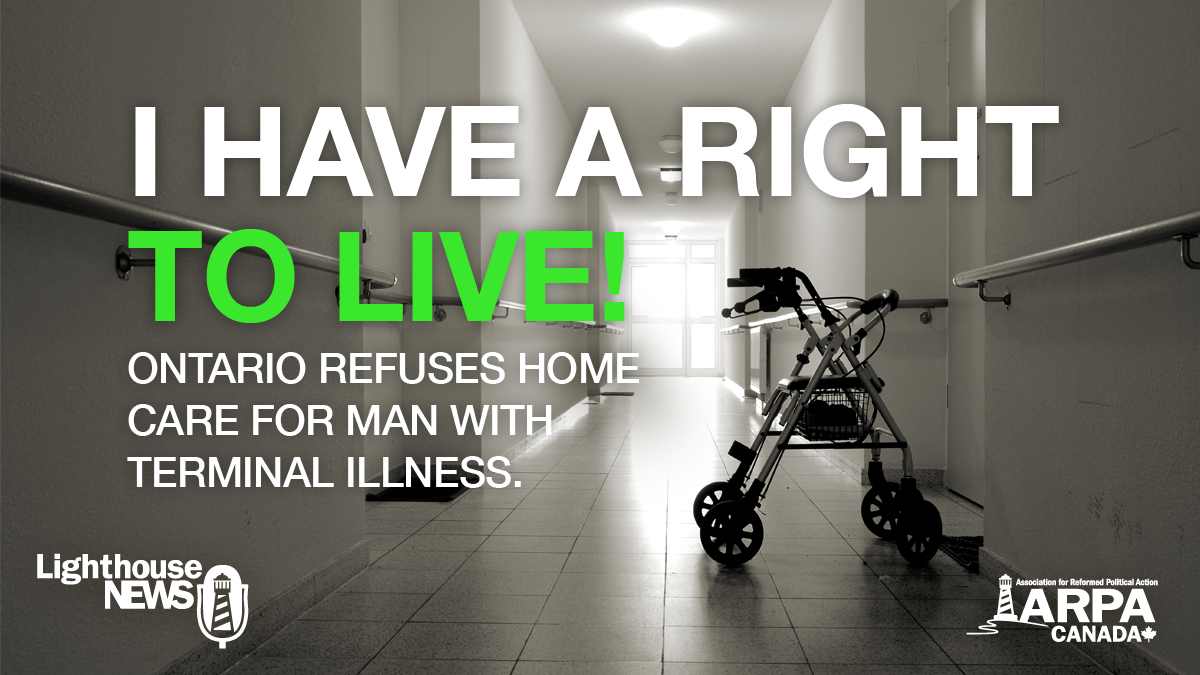 Pro-Life Mini-Conference: We Need a Law is preparing for a pro-life mini-conference in conjunction with the March for Life in Ottawa.

Pushback again Pro-Life film screening:  A local ARPA chapter in Ontario goes ahead with a movie screening of a pro-life film, in spite of some community push-back.

LN feature: I have a right to live! - Ontario refuses home care for man with terminal illness

A man in London, Ontario has launched a lawsuit that could potentially provide a counterbalance to the so-called “Carter Decision“, in which the Supreme Court legalized euthanasia in Canada just over two years ago. 42-year old Roger Foley is in hospital with a debilitating condition. He was originally being cared for at home, but the home care he was getting was clearly substandard. It included food poisoning and other problems.

But he’s been offered Medical Assistance in Dying in a hospital. Now, he’s suing to get out of that hospital and essentially for the right to have proper care at home.

Alex Schadenberg with the Euthanasia Prevention Coalition has been following the case closely.

LN:  Alex, let’s start with some background on the case.

AS:  Roger Foley has cerebral ataxia, which is this degenerative neurological condition. And he was a very active person, involved in political issues, involved with – you know – quite a few things in his life that made him very, very active, and then he came down with this condition. And I don’t know a lot about it; what I can say is that his long-term prognosis is a continued degenerative situation. He’s not in any way asking (for) or wanting Medical Assistance in Dying. What he wants is assistance in living.

So what happened is that he was living in his apartment, and the government has refused to allow him to hire his own home0care team. And so he had problems with totally inappropriate things happening to him, and that actually got him stuck back in the hospital. So because he’s in this situation, he’s unable to leave the hospital until he says “I can be assured that I have proper care in the home for me”, because in his condition he can’t do very much for himself. But he’s been turned down for that.
He applied to have direct, personal support services which is a possibility in Ontario, and they turned him down for it; they said that it wasn’t possible for him to have that.

He had food poisoning, he had been injured when they were transferring him, and he says “I can’t have these situations. I can’t be in a situation where I’m being put back into the hospital with injuries because my home care workers aren’t gonna properly care for me.”

LN:  So what he’s looking for – I think the term you were looking for was “Assisted Life with Self-Directed Funding.” That’s the option that is apparently in available in Ontario, but they’re not making it available to him.

AS:  Right. They call it Self-Directed Care. The program is called “Self-Directed Personal Support Services Ontario.” And it does exist, but they turned him down for that.

LN:  So now he’s suing, and this is – in a sense, if I’m reading this right, and I’ve had a look at the court brief – this is the exact corollary on the opposite end of the spectrum to the Carter case. The Carter case said “I want a right to kill myself”. This guy says “I have a right to assisted living; to stay alive.” How is this going to play out?

AS:  I find this a very interesting case because in fact he’s making an argument “What if I do want to live, and I’m not receiving the services that make it possible to enable me to live? And yet, they’re offering me assisted death. So here I have then the choice of assisted death, or languishing in a hospital without the type of care that I would rather have.” And so, he wants to be home. He wants to out of that bed. He wants to be in his home with proper care.

I don’t know how it’s going to come out, but I think his argument is very strong. I can also say that there is some precedent. People with disabilities in Winnipeg originally fought to get personal control of their… they wanted self-directed care, and this was quite a few years ago. There was a court case that was brought in to challenge the (Manitoba) government’s unwillingness to allow people with disabilities to hire their own care workers, and have control of the monies, etc., and how it’s disbursed and who they hire. And in fact they won that case back then and that’s why these sort of services exist. So in my opinion, he’s got precedent on his side.

What’s also interesting is to bring this back to what happened to Candace Lewis in Newfoundland. Just to remind you in 2016, soon after euthanasia was legalized in Canada, she was in hospital in Newfoundland. She was very, very, very sick; she was only 25 years old, but she was born with multiple disabilities, and the doctor was pressuring her and her family for euthanasia; so much so that the mother went to the CBC News, and we’ve actually got interviews of her through our social media and everything, because she’s better now. But the fact is that this is the same sort of idea. You’re pressured towards euthanasia, and you’re not interested in euthanasia; what you want is the treatment and the care to allow you to get better.

LN:  Are you surprised at how quickly this happened? I mean, I’ve talked to some lawyers about this case who say “Wow. It’s been only a couple of years since Carter, and here we are arguing the other side of the case.” We haven’t seen these kind of arguments – I don’t think – for example in the Dutch or the Belgian contexts, and yet here we are in Canada. Now we’re arguing the opposite end of the spectrum.

AS:  I’m not surprised by this happening very quickly. I’m actually a little bit shocked by the speed (of) the acceptance of euthanasia in my country. And part of the problem, I think, is related to the fact that we were – during the whole Carter debate, and during the whole euthanasia debate in Canada – we were heavily inundated by pro-euthanasia stories in our media. You know, if look back just a couple of years ago, how many stories did we have to be seeing by CTV News, Global News, CBC, inundating us with one story after another. So what they did is they broke down the resistance to the concept of euthanasia.  And therefore when it became legal, its acceptance level rose very, very fast.

And also, you know, the fact that we’re debating in Parliament right now euthanasia being extended to children, euthanasia being extended to people who have psychiatric conditions alone, and euthanasia being extended to people who asked for it previously, but who are now incompetent (and) cannot ask for it. You know, the Dutch have been debating for 20 years, and yet we’re into this a year-and-a-half or so and we’re jumping right in. It concerns me greatly. In this case, it doesn’t surprise me with the Foley case, because if you go for instance to the Netherlands, as much as I might be shocked by their euthanasia laws etc., I also recognize that they have excellent social services for people – far better than what we have. And so I don’t think that if a person like Roger Foley were living in the Netherlands – I’m not saying he wouldn’t be offered euthanasia like he’s been offered – but I think that at the same time he’d be receiving the self-directed care that he’s looking for.