Vandals attempt to shut down the abortion debate at U-Vic 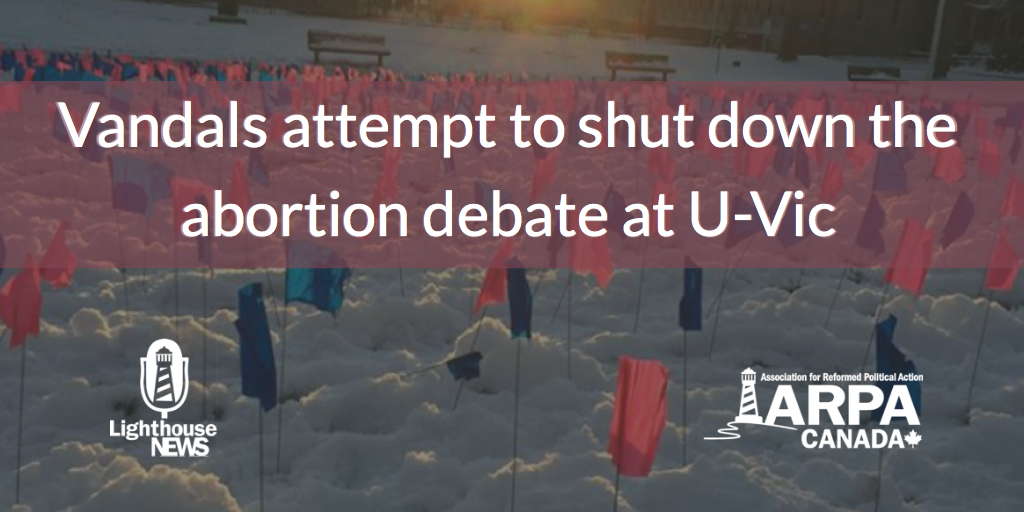 Violating the Bubble Zone: The first arrest has been made under Ontario’s bubble zone legislation. We speak to the protestor involved. UPDATE: We received news that Mr. Winter has passed away. Read more here.

Opposition motion takes on the Canada Summer Jobs Attestation: There’s a big push to support a new motion in Parliament on the Summer Jobs program.

For the second time in three months, a WeNeedaLaw flag display was vandalized at the University of Victoria.  The campus pro-life club, “Youth Protecting Youth”, set up a display on February 22nd on what’s called “the Quad”; the common grassed area near the Student Union Building. The display didn’t last long.

On the feature this week, a conversation with the president of Youth Protecting Youth, Cecelia Fillipone.

LN: So another protest; the second one in a few months at U-Vic in terms of the flag display sponsored by WeNeedaLaw. The first time it was vandalized, the flags were pretty much all ripped out and thrown into a pile. And this time it happened yet again…

CF: So the last flag display, we started the display around 8-8:30 in the morning. We had put out 10,000 flags, each representing 10 abortions in Canada every year, and we had a table set up and we were just engaging with students in dialogue. And we had a similar setup this time. Unfortunately this time, students knew who we were, and they knew what we were about, and so thing escalated a bit more quickly. And so we again set up by around 8:30, and immediately there were students coming by, taking out flags. (They were) not so interested in discussing the display with us, but more intent just on vandalizing, so this time the display lasted around 3 hours. It was destroyed by around 11:30.

Campus security was there the whole time, which was great. But we were disappointed in how things went down, and how short the display ended up being.

LN: I’m reading some other media accounts of this, and Campus security was there, and the Saanich Police Department was there as well. A couple of students who tried to take flags away were told by the police they weren’t allowed to do that, but ultimately they were allowed to leave with the materials. Did we end up losing a bunch of flags in this one?

CF: No. What happened was they did leave the Quad with what ended up being four cardboard boxes of flags. They were warned by police that if they did not return the flags they could be arrested, but they refused to comply, and police handed over the investigation to campus security. Luckily, the students decided not to take the flags away with them. They dropped them off in a nearby building, and we were called the next day saying that we could come and pick up the flags.

So luckily we didn’t lose the flags, but it was a bit of a scare the day of (the event).

LN: What does this say about the state of discussion on campus? I’m looking a website called Victoria Buzz that did some of the media coverage on this, and I’m looking at some of the comment strings here, and there’s one student there who says she’s had an abortion and she’s proud of it, and there’s no way that this kind of display should ever be allowed. The University is saying it has support available for students who were traumatized by this (event). What is going on on campuses?

CF: It’s really had to pin down exactly what is going on. In this display, I did have quite a few really good conversations with students about what they thought about the state of the lack of abortion law in Canada. So I had discussions with students who were very angry that we were there, and really thought the purpose of the display was to take away women’s rights. The sense I got was that there’s a really vocal minority of students who are advocating for women’s rights, but advocate for abortion by portraying it as a good thing- as something that should be celebrated. And those are the students who tear up the display. Those are the students who are interviewed by The Martlet and Victoria Buzz, and whose voices are really heard.

But I did have encouraging conversations as well. People who were supportive of our right to be there despite disagreeing with our position. So it is disheartening that that vocal minority is the one that is overwhelmingly heard, and that has the most disruptive power on campus to eliminate groups like our right to free speech.

LN: What I do find interesting is U-Vic did allow you to have this (event). I mean, a few years ago, there was some discussion about your campus pro-life club not even being allowed to do stuff like this on campus. That atmosphere has changed a little bit, no?

CF: Yeah. It was really encouraging to have the support of U-Vic. There’s a difference between U-Vic and the UVSS (University of Victoria Student Society) and their view of the club. They (UVSS) are an independent students group. They’re the ones who run the Student Union Building and the services there, and they’re the ones that ratify the clubs to be able to hold events like this at U-Vic. So it’s through them that we are able to book events, but U-Vic has a say in it as well. So they’re the ones who actually approve the events.

LN: Given the attention that you’re drawing to yourself with these flag displays – there’s been two now – is there any sense that the Student Society may want to pull your status as an accredited campus club?

CF: I’ve had a few students come up to me and say that they would look into having our club status taken away. From the UVSS directly, we haven’t heard anything. It’s always a possibility. At the beginning of each semester, there’s a Club Meeting; so representatives from all clubs who wish to have club status for the (upcoming) semester meet and are voted on. So if, for instance, at the next Club Council meeting, we showed up and were voted down, we’re not allowed to have Club status. It is a possibility, but that’s something that we could also fight against. That’s something that we could take action through UVSS and protest. So I’m not too worried it, especially given the number of conversations I’ve had with other students and other clubs who support our right to free speech, despite disagreeing with our position.

LN: So this was the second flag display, and it got vandalized too. I gotta ask, are you going to try to get a flag display where it can be up all day, or have you pretty much said “you know what.. we’ve made our point.”?

CF: We were really happy with the dialogue that was created by the flag displays. And that ultimately is the goal of any activism that we do. So we haven’t decided exactly if we are going to hold another display, but what we do want to look into is how we can have the most effective dialogue on campus, and if we think that having a display or having a similar display would be a valuable resource for students and allow us the opportunity to create dialogue, then yeah, I think we would consider doing it again. 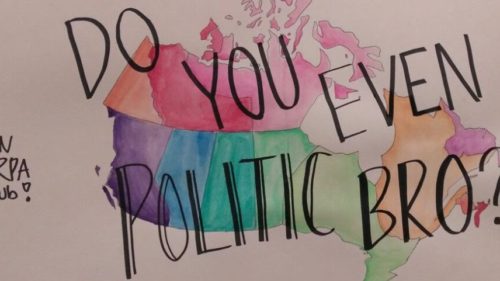