God does belong in Politics: A brief history of conservative Christian activism in Canada

10 Jan 2008 God does belong in Politics: A brief history of conservative Christian activism in Canada

When conservative Christians become involved in political activism their opponents are quick to complain that the “separation of church and state” is being violated. This accusation, that Christians are somehow trying to merge these two institutions, is actually a ruse and a scare tactic. Leftists use this tactic hoping they can convince Canadians to believe that Christians are out to use the power of the state to advance their religion. Unfortunately many fall for this lie.

We didn’t start this fight

Conservative Christian political activity is a relatively recent phenomenon in Canada. Its first inklings were in the 1970s, in the wake of the widespread social and legislative changes of the late 1960s. As Albert Menendez notes in Church and State in Canada, “Canada’s relatively conservative and church-oriented society began to change dramatically in the 1960s.” Among the legislative changes was the legalization of birth control and abortion, as well as the liberalization of divorce laws.

Then, after the Charter of Rights was adopted in 1982, Sunday closing laws were struck down by the courts, and homosexual rights were advanced.

But already in the late 1960s the legislative onslaught against traditional morality was well underway. One very significant social trend also underway by the late 1960s was a decline in church attendance and people identifying themselves with particular churches. At mid-century most Canadians attended church regularly, whereas now it’s only a minority that attends. This has gone hand-in-hand with a sharp decline in the influence of Christian morality. As Menendez puts it, “The impact of religion on culture is slipping.”

It began with the pro-life movement

But while regular church attendance may have been dropping in the 60s those that remained starting making some noise. The first notable instance of Christian political involvement was the pro-life movement. It was sparked by the (limited) legalization of abortion in 1969, and for the first few years was comprised almost exclusively of Roman Catholics. Sociologist Michael Cuneo recounts the early development of Canada’s pro-life movement in his book Catholics Against the Church: Anti-Abortion Protest in Toronto 1969-1985. One particularly notable factor is that the so-called “mainline” churches adopted the “pro-choice” position on abortion. Cuneo summarizes the position of the Anglican Church, United Church, and apostate Presbyterian Church of Canada this way: “in a less-than-perfect world abortion is at times an imperfect yet permissible response to situations of duress, and though the decision to abort should never be taken lightly, it should reside ultimately in the hands of the pregnant woman.” These are the words of false prophets.

Cuneo includes a brief discussion describing the subsequent entrance of conservative Protestants into the pro-life movement alongside Roman Catholics. He notes that,

“Evangelicals turned activist belonged to smaller denominations such as the Christian Missionary Alliance, the Pentecostal Assemblies of Canada, the Convention and Fellowship Baptist churches, and the Canadian Reformed Church. The last denomination, not evangelical in the strict sense, would in future years play a role in the movement far disproportionate to its size or influence within the spectrum of Canadian Protestantism.” [emphasis added]

An article by Dennis Hoover in the book Sojourners in the Wilderness: The Christian Right in Comparative Perspective, describes the increase of Christian activism in Canada. In 1974 Baptist evangelist Ken Campbell formed Renaissance Canada. By the early 1980s, some saw Campbell as Canada’s equivalent to Jerry Falwell in the US. Campaign Life started in 1978, and then in 1983 REAL Women was formed. By the mid-1980s Focus on the Family Canada had emerged. In 1986 the Christian Heritage Party (CHP) was formed. “In the 1988 election, it received 100,000 votes on the strength of 20,000 members.” Despite its subsequent decline, the CHP has maintained a notable testimony on many important points. By the late 1990s Canada Family Action Coalition (CFAC) was making its presence felt. And even now new groups are emerging.

The main point of all this is that conservative Christian political activism is a response to the advance of social liberalism. The social Left has been advancing on numerous fronts, and the Christians are, in effect, defending themselves, or at least defending traditional moral principles. The political and social conflict involving conservative Christian activists was initiated by the social Left, not by the Christians. And this defensive activism on the part of Christians has nothing to do with breaking down the barrier between church and state. The Left launched an assault against Canada’s moral and legislative principles, whereas Christians are defending those principles. There is no violation of the separation of church and state.

* This article was first published in Reformed Perspective, March 2006. 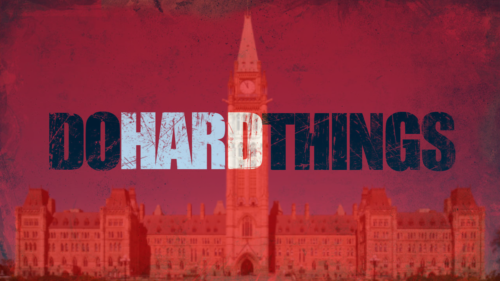