To Rule is Sacrifice

Posted at 17:35h in Justice and Freedom 0 Comments
0 Likes
Share

By James Zekveld (February, 2010 – www.ARPACanada.ca): When a Christian enters into the realm of politics he faces many challenges.  He is at war with a system that has been perverted to serve the interests of man rather than those of God.  While he works toward a system that submits to the rule of Christ, he must simultaneously ensure that he is not compromising.  Compromise is easy.  A man can give up a basic Christian principle in order to obtain power, in the hopes that by having that power he can obey the rule of God. Meanwhile, what he supports can no longer be considered truly Christian.  There is one basic rule that he must remember when he takes power.  A ruler must be able to sacrifice himself for his sheep.  If he rules for some other reason, he has given up a basic understanding of what authority is.

Some of our greatest examples of leadership come from the Old Testament; especially Moses, David and Solomon, but also Abraham, Isaac and Jacob.  In The Prophets the leaders of Israel are called shepherds.  They are blamed for neglecting their sheep.  This is fitting for many of the first leaders mentioned were shepherds.  Remember that Jacob settled in Goshen, because his people were shepherds. (Genesis 6:32)  This theme of the rule of shepherds continued in David.  David, a shepherd, defending his sheep from the bear and the lion, would someday defend the sheep of Israel from the Philistines and other enemies surrounding them.

Sacrifice for a nation includes more than defending them.  It means ensuring that they are properly cared for.  A commonly repeated phrase in the prophets is, “They leave the widow and the orphan destitute,” and not only that, but they rob them. (Malachi 3:15; Isaiah 1:23; Jeremiah 5:28 etc.)  What is the sign of the true Christian?  He cares for the widow and the orphan. (James 1:27)  The rulers of the people must take care of their poor; they must sacrifice themselves for them.  This, of course, is no excuse to steal from the rich to give to the poor.  The leader of a people must sacrifice himself for those poor who cannot help themselves; namely the widow and the orphan.  Any man who wants to rule must remember these judgments of God.

No place in the scriptures gives us a clearer picture of what it is to be a leader or a person of authority and of one who is ruled, than Ephesians 5 and 6.  In Ephesians 5 we are given a picture of the Christian life.  It is a life of love, a life of responsibility toward those who have been placed around us and under our authority and to those who have authority over us.  In the proper order of life the servant serves his master with love and the master in turn is commanded to be fair to his servant.  The child is called to be obedient to his parents and in turn the parents must not provoke their children to wrath.  Then of course there is marriage.  The picture Paul gives here is a picture of Christ and His love for His church.  The husband, ultimately, must sacrifice himself for his wife, just as Christ sacrificed Himself for His church.

This brings us to the greatest example of leadership.  Christ became our king through the ultimate sacrifice, His death.  His death brought to each Christian, salvation.  Even more, He was exalted to the right hand of God to rule over the entire world.  (Hebrews 2:8)  Those who rule over His church are called to similar lives.  They are called to sacrifice.  Think of the disciples; they left their nets, their lives, to follow Christ.  When you read through the pastoral letters of Timothy and Titus, you see that the pastor is called to forget about himself and to dedicate his life to his flock.  Like the patriarchs they are shepherds, called to care for and protect the sheep.

When Christians participate in politics; when they rule in civil government, they must also follow this basic rule.  They are not spiritual rulers, they are civil rulers, but they are still called to sacrifice for their people.  By taking office they enter into a very serious covenant with the people they rule.

One example from Dutch history should provide modern magistrates with someone to admire and imitate.  William of Orange was of German abstraction, but he was called to be the “stadtholder” of various provinces of the Netherlands.  He took his job very seriously.  He lost his son and his brother to the Spanish, because he would not let his own people be slaughtered by the Spanish.

It is hard to find men with such devotion that they would die for the people they rule over, men who would give the ultimate sacrifice.  A man, who would rule over a people, must look at the greats of the past, not those who did the greatest things, but those who were the most loved, those who still are admired today for the absolute love they gave to their people.  No position of responsibility should be taken lightly.  Those who mislead, those who destroy those they lead should heed these words, “And if anyone causes one of these little ones to sin, it were better for him to have a millstone wrapped around his neck and be thrown into the sea.” (Mark 9:42) 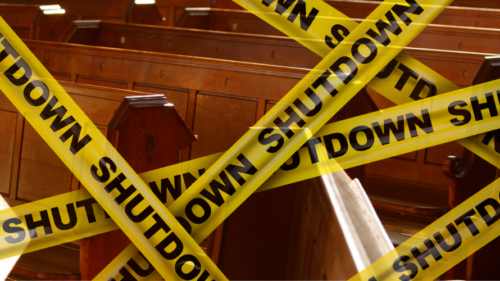 As COVID restrictions drag on, the civil government needs guidance from the instituted church