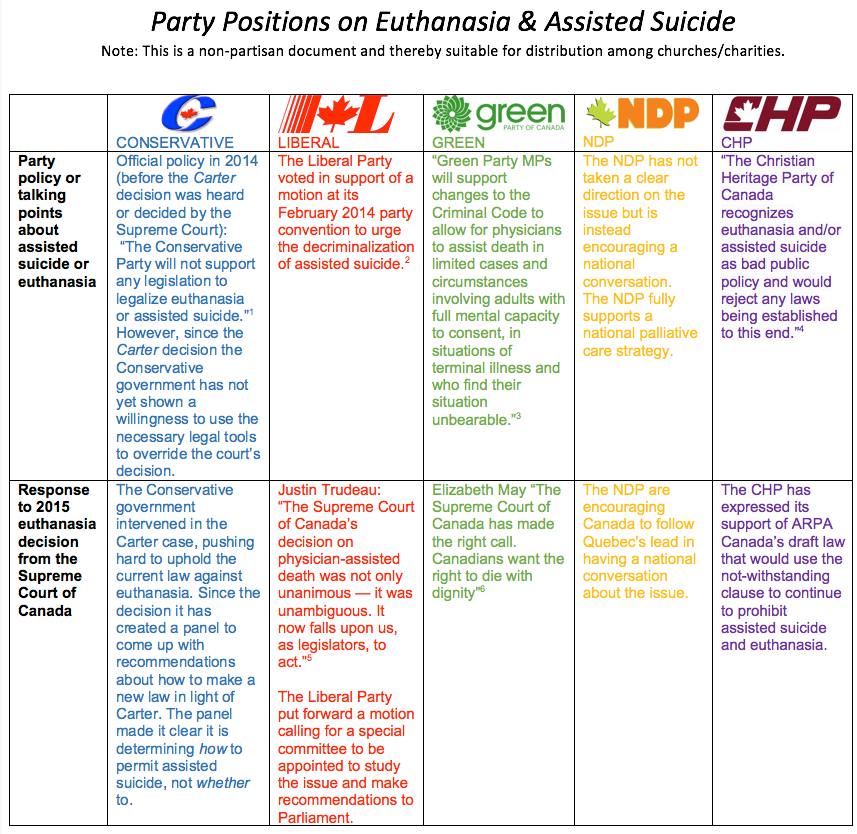 The recent euthanasia decision by the Supreme Court of Canada in Carterv. Canada hangs its shadow over Election 2015. The results of this election will have a substantial impact on the direction Canada takes and the extent to which euthanasia and assisted suicide is challenged, curtailed, or even celebrated.

In February 2015, the court struck down Canada’s laws against assisted suicide and euthanasia and gave Parliament 12 months to act. No new legislation has been introduced yet. The new Parliament will have to act quickly or Canada will be left with an enormous hole in its Criminal Code and vulnerable lives will be at risk.

ARPA Canada has made this issue our top priority through 2015. We have drafted a policy report and sent it to all MPs and Senators, met with many MPs and the Ministry of Justice to discuss the options, and we are currently in a consultative process with a special committee struck by the government. We have also drafted both a sample law and a very extensive policy document which pushes Parliament to pass as principled a law as possible. But the reality is that it will be the new government which will decide the precise course of action. Your vote matters.

Unless Parliament passes legislation to the contrary, the right to life will transform from something that has an objective standard (if you are a living human being – the objective standard – you have the full protection of the law), to a subjective standard (how do you and others feel about the value of your life?). When the right to life is based on a subjective standard, it is open to being challenged by oneself and by others. Without the benefit of much explanation, the Supreme Court has given Canada’s Parliament and Legislatures the overwhelming task of creating and implementing a system in which some people may kill others in some circumstances.

The Supreme Court concluded that “a permissive regime with properly designed and administered safeguards was capable of protecting vulnerable people from abuse and error.” But is that true? The evidence shows that it’s wishful thinking at best. Consider other permissive jurisdictions.

Netherlands: The number of euthanasia deaths has doubled between 2008 (2,331 reported) and 2013 (4,829 reported), as the practice becomes increasingly normalized. A five-year Lancet study also found that 23% of euthanasia deaths were not reported to the required review committee in 2010, up from 20% in 2005. The country also has mobile euthanasia teams, able to perform euthanasia for those whose request would be, or was already, declined by their doctor. In 2005, Dutch pediatricians adopted the Groningen Protocol, allowing the killing of babies in “exceptional” circumstances.

Belgium: A Canadian Medical Association Journal study concluded that one-third of the euthanasia deaths in Belgium were done without explicit consent, in spite of a law clearly requiring consent.  In 2014, Belgium extended the “right” of euthanasia to children. Presumably, the state now has a duty to inform children that an acceptable option to address their suffering is death.

The implications of this data are frightening, especially since in each jurisdiction safeguards were put into place to ensure that this sort of abuse didn’t occur.

God’s Word is very clear on this issue: the one who takes another’s life will not be held guiltless and human life is sacred. Genesis 9:5-6 says, “And for your lifeblood I will require a reckoning: from every beast I will require it and from man. From his fellow man I will require a reckoning for the life of man. ‘Whoever sheds the blood of man, by man shall his blood be shed, for God made man in his own image.’” Parliament has the means to continue to prohibit euthanasia and should do everything it can to accomplish this.