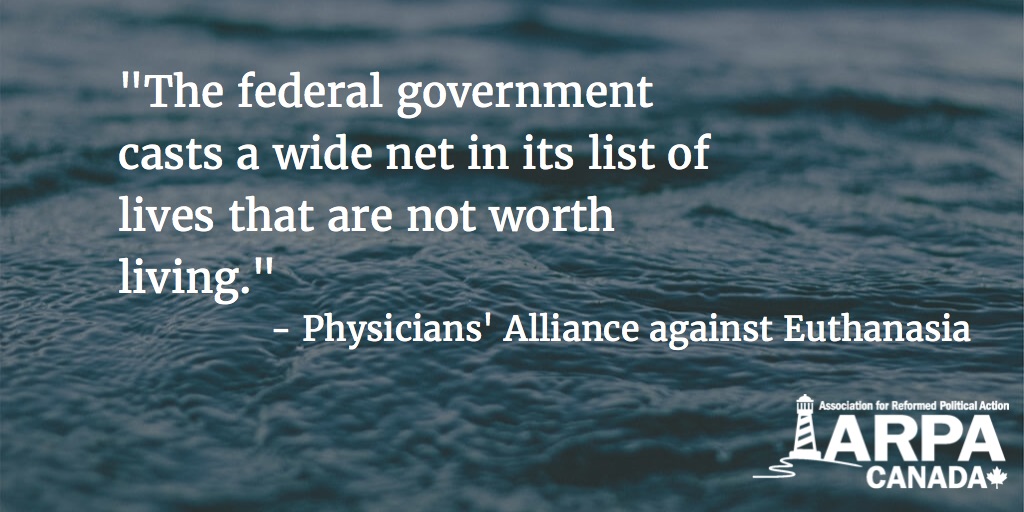 The Liberal Government released their Bill C-14 on Euthanasia and Assisted Suicide. Numerous organizations have responded, including Christian Legal Fellowship which you can read here.

Learn how to TAKE ACTION on this Bill at arpacanada.ca/stop-euthanasia.

ARPA Canada would like to quote the response of Physicians’ Alliance against Euthanasia which echoes our sentiments in their press release below:

Montreal, April 15, 2016 – In the midst of one of the worst suicide crises in our country’s history, the federal government has tabled Bill C-14, which proposes to legalize both euthanasia and assisted suicide across Canada under the pseudonym “medical assistance in dying”. The waltz of words continues, as we malign palliative care by presenting “medical assistance in dying” as the only alternative to an agonizingly painful death.

From the outset, the bill makes clear the gravity of what our society is about to accept: it amends the Criminal Code to “create exemptions from the offences of culpable homicide, of aiding suicide and of administering a noxious thing, in order to permit medical practitioners and nurse practitioners to provide medical assistance in dying and to permit pharmacists and other persons to assist in the process”.

These people would not be criminally responsible if they were practising euthanasia or helping a patient to commit suicide. Nor would the people helping the physician or nurse practitioner “if they do anything, at another person’s explicit request, for the purpose of aiding that other person to self-administer a substance that has been prescribed for that other person as part of the provision of medical assistance in dying”. Therefore, every citizen will be able, without fear of prosecution, to help another person to commit suicide if his condition meets the criteria established by law: a parent, a friend, a brother, a sister, etc.

Not surprisingly, there is no requirement that people who suffer be at the end of life to have access to assisted suicide. Only that “their natural death has become reasonably foreseeable (…) without a prognosis necessarily having been made as to the specific length of time that they have remaining”. It seems to us that everyone’s death is reasonably foreseeable.

Moreover, the federal government casts a wide net in its list of lives that are not worth living, including people with a serious and incurable disease, condition or disability, those losing autonomy and those with persistent physical or psychological suffering “that is intolerable to them and that cannot be relieved under conditions that they consider acceptable.” In drawing up a set of circumstances in which it is now acceptable to commit suicide with the help of a doctor and the complicity of the state, the federal government endorses the choice of death for a host of reasons… on the condition of being at least 18 years old.

We are already far from the idea that was sold to us when this debate began: from proposing death for a few exceptional cases, we’ve reached the point where it’s considered “health care” like any other. Access to euthanasia and assisted suicide is such a priority that the federal bill suggests that a person be allowed to shorten his time of reflection (fixed at 15 days) if natural death becomes imminent – which invalidates the argument of the Supreme Court of Canada who claimed that “medical assistance to die” would help prevent people from taking their life prematurely…

In short, after the smoke screen that was the scandalous report of the Special Joint Committee, Bill C-14 gives the false impression of being prudent and restrictive. But a further reading enables us to understand where we are heading: the government is already expecting a need for “further studies on requests by mature minors, advance requests and requests where mental illness is the sole underlying medical condition” after the implementation of the law.

An even more permissive law won’t be long in coming. As soon as the population has swallowed this first poison pill.

Anyone who still respects the inherent and inalienable dignity of every human person and is concerned for the common good has one thing to do right now: call his or her MP to try to block this Bill unworthy of Canadian society.