The following article was published in the Hamilton Spectator on May 24th. It was written by Pieter Harsevoort and James Schutten, after they presented with ARPA Canada to the House of Commons Standing Committee on Justice and Human Rights. Because legalized euthanasia and assisted suicide will most directly affect people with severe disabilities, as James and Pieter have, Canadians – lawmakers in particular – must listen to their story. Here is their perspective: 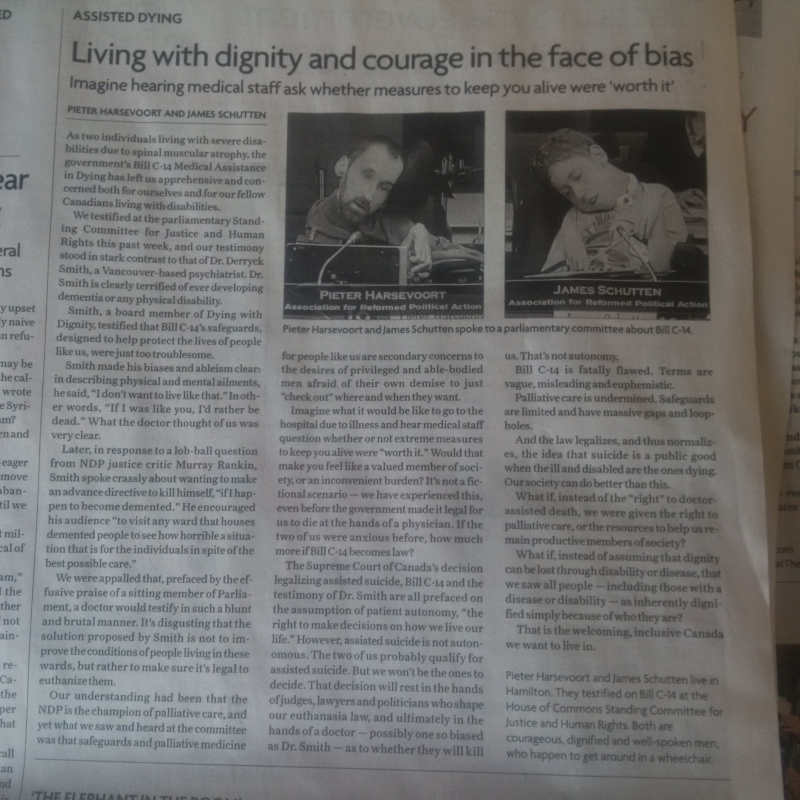 As two individuals living with severe disabilities due to spinal muscular atrophy, the government’s Bill C-14 Medical Assistance in Dying has left us apprehensive and concerned both for ourselves and for our fellow Canadians living with disabilities. We testified at the Parliamentary Standing Committee for Justice and Human Rights this past week, and our testimony stood in stark contrast to that of Dr. Derryck Smith, a Vancouver-based psychiatrist. Dr. Smith is clearly terrified of ever developing dementia or any physical disability. Smith, a board member of Dying with Dignity, testified that Bill C-14’s safeguards, designed to help protect the lives of people like us, were just too troublesome. Smith made his biases and ableism clear: in describing physical and mental ailments, he said, “I don’t want to live like that.” In other words, “If I was like you, I’d rather be dead.” What the doctor thought of us was very clear.

Later, in response to a lob-ball question from NDP justice critic Murray Rankin, Smith spoke crassly about wanting to make an advance directive to kill himself, “if I happen to become demented.” He encouraged his audience “to visit any ward that houses demented people to see how horrible a situation that is for the individuals in spite of the best possible care.”