Speak up for pro-life girl attacked by Alberta Education Minister 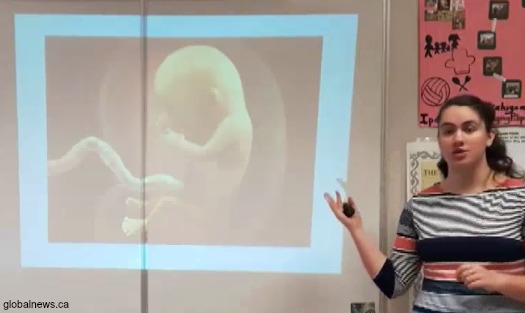 Over the past day, numerous Albertan and even national media outlets, along with the Alberta Minister of Education David Eggen, have been criticizing Red Deer Pro-Life and a Roman Catholic school for allowing a pro-life presentation. The media backlash has been fierce, including a call for an immediate investigation and a ministerial order that all non-teacher presenters in Alberta schools be pre-approved by the state.

The polite young woman who made that presentation, which is being shared far and wide, is a member of the Reformed community and has previously volunteered for ARPA Canada.

ARPA Canada has sent a press release to the mainstream media in the province (you can read the press release here or see below). But we are just one voice. We are looking to you to stand up and make the truth heard in a respectful way. If we are silent, we should not be surprised to see an even greater chill on our fundamental freedoms in this province.

This is just one more example of how the Education Minister is using his heavy hand to reshape the entire education system to promote his very secular ideology. Imagine, any guest speaker in an Alberta school, first needs to be approved by his office! If that happens, you can bet that groups that challenge his ideology, including ARPA, won’t be able to present anymore. Mr. Eggen and your local MLA need to hear from you directly! They need to be respectfully reminded that it is parents that have the authority to direct the education of their own children.

May God keep our land glorious and free, and may we be faithful instruments in His hand.

EDMONTON – The Association for Reformed Political Action (ARPA) Canada applauds the call for an inquiry into what students of Alberta schools are exposed to. “The sad truth is that Alberta’s Ministry of Education is the party most guilty of promoting propaganda in provincial schools,” commented ARPA Canada’s Executive Director Mark Penninga.

Accessing Information not Myths (AIM), an Alberta-based activist group, is calling for a province-wide investigation in light of a presentation made about abortion in a Roman Catholic school in Red Deer. Education Minister David Eggen was quick to chime in, expressing regret that the province’s “excellent filters didn’t catch something like this.” Eggen added, “I think it’s a good reminder to everybody to be vigilant and to ensure this sort of hateful propaganda doesn’t infiltrate our schools.”

ARPA Canada notes that an inquiry into what is being taught to, and even forced on, Alberta students is exactly what ARPA Canada has advocated for, though Minister Eggen has been most unreceptive.

“We have been working with hundreds of Albertans over the past year who are concerned about how the Minister of Education has been forcing their schools to promote a radical gender ideology that is unscientific, full of misinformation and harmful,” explained Penninga. “Instead of showing even an ounce of regard for these concerned parents, the Minister ploughed ahead with his agenda and his secretive efforts to revamp the entire education system using “experts” that he refuses to make public.”

As reporter Ted Byfield has exposed, Minister Eggen refuses to disclose crucial information about who is behind what even he calls the most sweeping reform of the school curriculum ever undertaken in the province. Freedom of Information requests are also denied. The minister absolutely refuses to share the names of the 300-400 “experts” who are making these radical changes.

“It is ironic that Minister Eggen and AIM call the pro-life presentation hateful and inaccurate,” Penninga added. “No evidence is produced to support this. The sciences unequivocally prove that human life starts at conception. If the Minister wants the scientific facts taught in Alberta schools, we welcome it, because it would only further the pro-life cause,” Penninga concluded.

ARPA Canada lawyer André Schutten also noted that the Minister’s comments are constitutionally inappropriate. “This is not the first time Minister Eggen seems to think he stands above the Canadian constitution,” Schutten noted. “The Charter of Rights protects our fundamental freedoms, including freedom of speech, religion, and association. The young lady at the centre of this controversy was delivering a factual and respectful presentation, at the request of the school. Mr. Eggen and the activists at AIM may have different views about abortion, but that does not give them the right to censor all views they don’t like.”

Schutten went further. “The Charter exists to protect citizens from the heavy hand of the state. What Mr. Eggen is implying here – that he can snuff out a pro-life presentation like this – is borderline illegal. If he continues in this direction he can expect court challenges from our organization and others like it.”