A Primer on the Political Parties in BC

There are 3 political parties that currently hold seats in the Legislature of British Columbia: the BC Liberals, the BC New Democrats, and the BC Greens. Two other provincial parties, the BC Conservatives and the BC Christian Heritage Party, also may be of interest to Reformed Christians.

The purpose of this article is to sketch out the popularity, the general ideologies, and the policy of each of these five parties so that you can make sense of BC’s political news, cast an informed vote, and (hopefully) join the political party that best aligns with your political views.

Below is an introduction to each of the five most notable political parties in British Columbia. The parties are listed in order of size (current number of MLAs). The BC Liberals, BC New Democrats, and the BC Greens are the mainstream (or “brokerage”) parties in British Columbia; their main policy priorities usually do not touch upon the mainstays of ARPA’s work, issues like abortion, euthanasia, Christian education, SOGI, or conversion therapy. Although the BC Conservative and the BC Christian Heritage parties focus more on these issues, they have a lower likelihood of being elected. Below, I’ve linked each party name to its website, where you can learn more.

2017 Election Result: although the party narrowly won the most seats (43) and the largest percentage of the popular vote (40.4%) in the 2017 election, it is British Columbia’s official opposition

Philosophy: As a center-right party, the BC Liberal Party draws support from both federal Conservative and federal Liberal party supporters. It brands itself as the party of free enterprise and tends to be fiscally – although not socially – conservative. Although the party welcomes members of all faiths and beliefs and some members are pro-life, the BC Liberal party is officially pro-choice. SOGI 123 was introduced under the previous BC Liberal government. Adding “gender identity and gender expression” to British Columbia’s Human Rights Code was unanimously accepted by BC Liberal MLAs (although some MLAs conscientiously abstained from voting). The party has no official position on conversion therapy. The party has pressured Delta Hospice to provide euthanasia and has no plan to bolster palliative care services. Although the party is pushing back against the NDP government’s funding cut to Independent Distributed Learning (IDL schools), the party has little interest in changing the current status of independent schools.

2017 Election Result: although it won the second-most seats (41) and second-largest share of the popular vote (40.3%), the BC NDP currently governs British Columbia with a minority government supported by a supply-and-confidence agreement with the BC Green Party

Philosophy: The party occupies the center-left of the political spectrum. Although the party has historically been unabashedly pro-choice and “progressive” on LGBTQ issues, the BC New Democratic Party has largely left life, gender, and sexuality issues alone in the first few years of their new government. However, their entire caucus voted in favour of adding gender identity and expression to British Columbia’s Human Rights Code and the NDP government has maintained SOGI 123 in public schools. The BC NDP has historically been opposed to independent schools and has cut funding to Independent Distributed Learning (IDL schools) by 13%.

The main priorities of the current NDP government revolve around making life more affordable and sustainable. They are in the midst of raising the minimum wage, expanding access to public childcare, raising taxes on the wealthiest British Columbians, raising the carbon tax, and encouraging a transition to a low-carbon economy. The party tentatively supports balanced budgets, but “not at the expense of children, seniors, families and the most vulnerable.” The BC NDP also is beginning to implement the United Nations Declaration on the Rights of Indigenous Peoples (UNDRIP).

2017 Election Result: the party is currently supporting the BC NDP’s minority government with its 2 seats (formerly 3 seats before their former leader Andrew Weaver resigned from the BC Green caucus to sit as an independent) and 16.8% of the popular vote

Philosophy: This right-wing party tends to be fiscally conservative but is becoming more supportive of socially conservative policies. At their latest policy convention, the party stated that it supported the right of hospices such as Delta Hospice not to provide euthanasia against their conscience and reiterated their support for palliative care. The party also opposes values attestations, such as the former federal proposal that recipients of Canada Summer Jobs grants must support abortion. The party has no position on abortion,  gender and sexuality, SOGI 123, or conversion therapy. The BC Conservative party also supports a “per student model” of educational funding in which public and independent schools receive the same level of funding per student enrolled.

Philosophy: As its name implies, the BC Christian Heritage Party presents itself as distinctly Christian, standing “on the foundation granted by our Creator: individual dignity, personal freedoms, economic enterprises, and limited government.” The party is committed to defunding abortion and to cease providing euthanasia through the provincial health care system. The party wishes to promote palliative care where numbers permit. It supports the definition of marriage as between one man and one woman. The BC CHP would also extend “per student” funding to independent schools and believes that parents have the primary responsibility for raising and educating their children.

The provincial Christian Heritage party supports balanced budget legislation, would hold a referendum on whether to adopt a single income tax rate or a single consumption tax rate and would hold a referendum before increasing tax rates or introducing new taxes. The party proposes to eliminate all provincial efforts to combat climate change, including scrapping the carbon tax. Finally, the party supports the replacement of the federal Indian Act and supports the introduction of private property on Indigenous reserves.

This article is in an updated version of an article originally posted in January 2020. 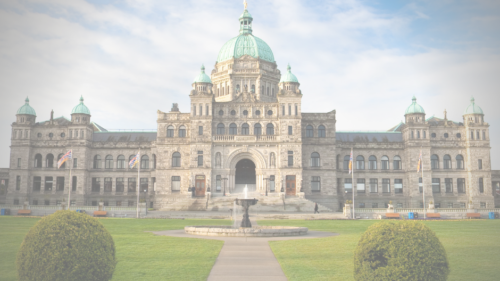 BC Action Item: Voting on how to vote