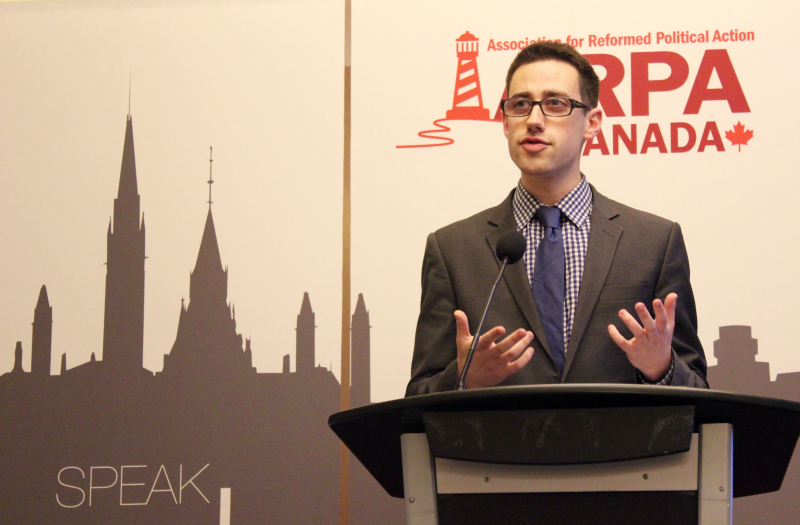 Select sessions from the God and Government 2016 event will be made available for free live online viewing. The anticipated streaming schedule is shown below. Click a session's title to be taken to its YouTube Live Event page, or view the current event (if any) in the player above.   Tuesday, May 10Ottawa Time (EDT)Vancouver Time (PDT) Prostitution and PornographyDaniel Gilman 9:00 AM - 9:45 AM 6:00 AM - 6:45 AM Euthanasia and Assisted SuicideColin Postma 11:00 AM - 11:45 AM 8:00 AM...

Posted at 15:42h in Education, Events, Gender and Sexuality 0 Comments
0 Likes
Share
In recent months the Alberta government announced that it is requiring all schools in the province to change their policies to promote a secular understanding of transgenderism and LGBT rights. What can Christian parents and communities do to stand up for parental authority and fundamental freedoms? Join ARPA Canada on our spring tour through Alberta this April. ARPA's Executive Director, Mark Penninga and Director of Law & Policy, André Schutten will explain the current challenge, while also speaking directly to a Christian perspective on transgenderism and civil disoedience. Event details are below, and a printable version of the poster can be found at the bottom of this article.
Read More

Posted at 18:35h in Events, Pre-Born Human Rights 0 Comments
0 Likes
Share
The National March for Life will be held in Ottawa on Thursday, May 12, 2016, and across the country there will be six provincial marches (click here for a listing). For the second year, Reformed Prayer Services will be held in both Victoria, prior to the provincial march in BC, and in Ottawa, prior to the national march. We hope to see you at one of these prayer services, details are below. Following each prayer service there will be bagged lunches for all those who pre-register. After the prayer service, head to the provincial Legislature (Victoria) or Parliament Hill (Ottawa) to join with thousands more in speaking up for the most vulnerable in our society.
Read More

To register or learn more, contact Niki at [email protected] or complete the form below. If you prefer, you can fill out the form at this link instead.   ... 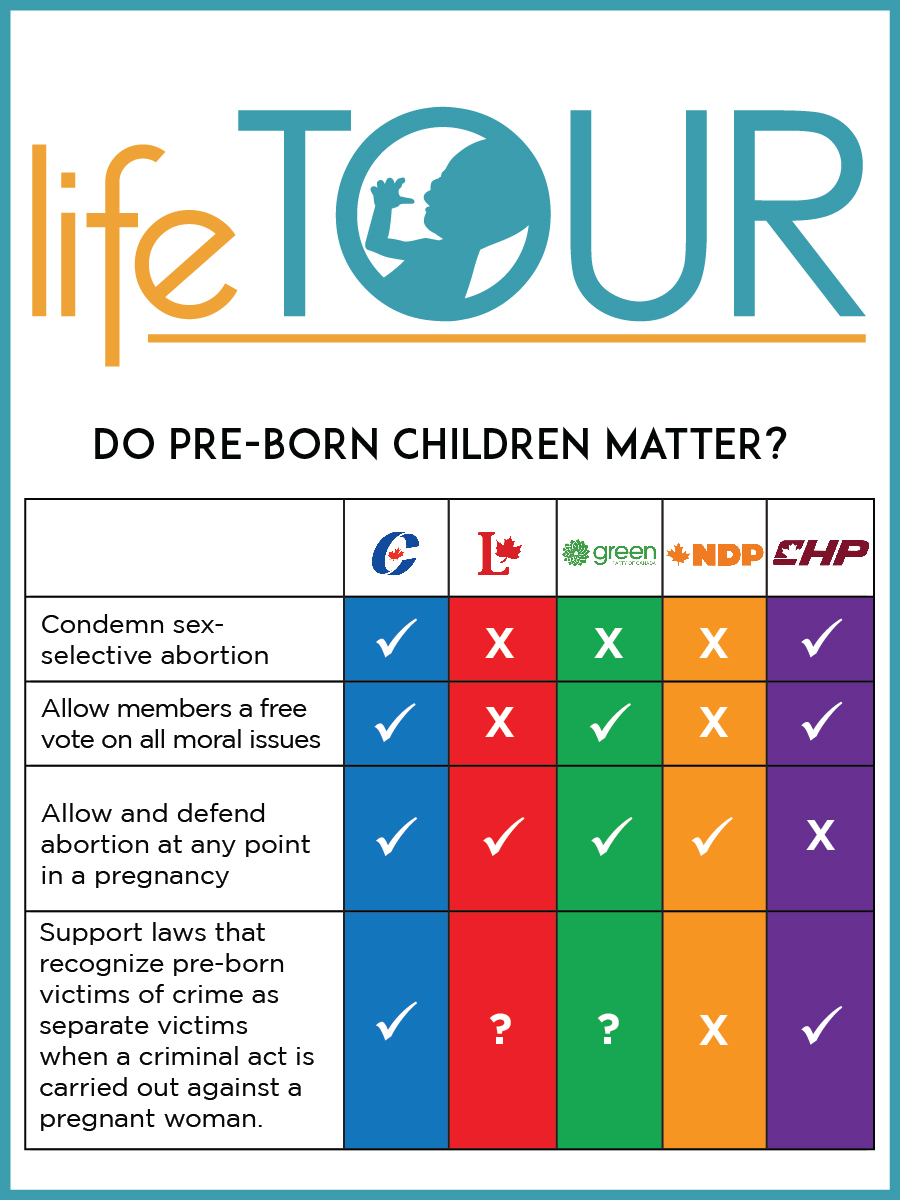 Posted at 19:20h in Events, Politics, Pre-Born Human Rights 0 Comments
0 Likes
Share
(A print version of this article, suitable for churches is attached below) The introduction of abortion legislation is one promise the major political parties will not be making in the lead up to the October 19th election. It may seem like a political victory for the pro-life movement in Canada is not forthcoming. It is as though God has withheld his favour on the labours of those striving for laws protecting our pre-born neighbours. Will we ever succeed? Would it not be better to simply acknowledge that any effort to implement legislative change is futile? Maybe we should just focus on sharing the gospel and effect change that way.  The temptation to simply concede the status quo may be strong, but it is wrong and contrary to a Biblical understanding of the purpose of government. God restrains the evil of abortion by various means, including the government. Government is sent “to punish those who do evil and to praise those who do good” (1 Peter 2:14). The Bible is full of examples, both in the Old and New Testaments, of God’s people having influence on secular governments. Joseph, Daniel, Esther and Paul come to mind immediately. Regarding abortion and the Biblical teaching that all human beings are created in the image of God and have equal status before Him, perhaps it is easiest to point to Exodus 20 and the sixth commandment “You shall not kill”. The Scriptures are clear: the unjust killing of a human being is never met with the approval of a holy God. That said, the unjust killing of an innocent child is viewed with particular disdain. Consider Jeremiah 7: “The people of Judah have done evil in my eyes, declares the Lord….They have built the high places of Topheth in the Valley of Ben Hinnom to burn their sons and daughters in the fire – something I did not command, nor did it enter my mind.” The creator God could not even fathom such a thing! The killing of innocent children is something God detests and (in human terms) did not anticipate human beings were even capable of doing!
Read More

In January, ARPA Canada was honoured to participate in a small way in the annual conference of the Canadian Reformed Theological Seminary (CRTS). The title of the conference this year was, As You See the Day Approaching: Reformed Perspectives on Eschatology. It was really neat to see how doctrines of the faith also have practical implications in our personal lives and in our public life together. The entire conference was captured on video and can be watched here.  One speech in particular tied the work of ARPA Canada to Reformed...

On October 2, 2014 nearly one hundred volunteers from across Canada gathered on Parliament Hill to plant 100,000 pink and blue flags for ARPA Canada's WeNeedaLAW.ca campaign. This was the largest anti-abortion display our country has ever seen. The flags, each one of them, represent one abortion every year in Canada. The display captured both national and international attention. You can view photos of the display here and on our Facebook page here. That was ten weeks ago. On Friday, December 12th, CBC ran a top story on the...

Volunteer Interview On Thursday, October 2, 80+ volunteers and staff from ARPA Canada and We Need a Law assembled on Parliament Hill to participate in the largest pro-life display this nation has seen. The volunteers gathered at 6:45 am for a time of devotion and prayer, before inserting 100,000 pink and blue flags into the lawn in front of the Parliament Buildings. These flags represent the 100,000 lives lost to abortion every single year in Canada. Every. Single. Year. Photo albums have been posted to the ARPA Canada and...

Posted at 16:38h in Events 0 Comments
0 Likes
Share
Canada in 2020: Still a Land Glorious and Free?: Working for a better future in the knowledge of God’s Providence Do Canadian Christians have 2020 vision? They ought to. In just the last year, euthanasia was legalized, our prostitution law was struck down, and Christians are told that they may not practice law if they join a community committed to God’s standards for sexuality. These recent developments give Christians reason for concern over the future of our nation and for our freedom to live out our faith. ARPA’s André Schutten (legal counsel), Mark Penninga (executive director) and Bruce DeBoer (Grassroots Coordinator) will discuss the near future of Canada, and what we need to focus on today for the sake of the next generation.
Read More