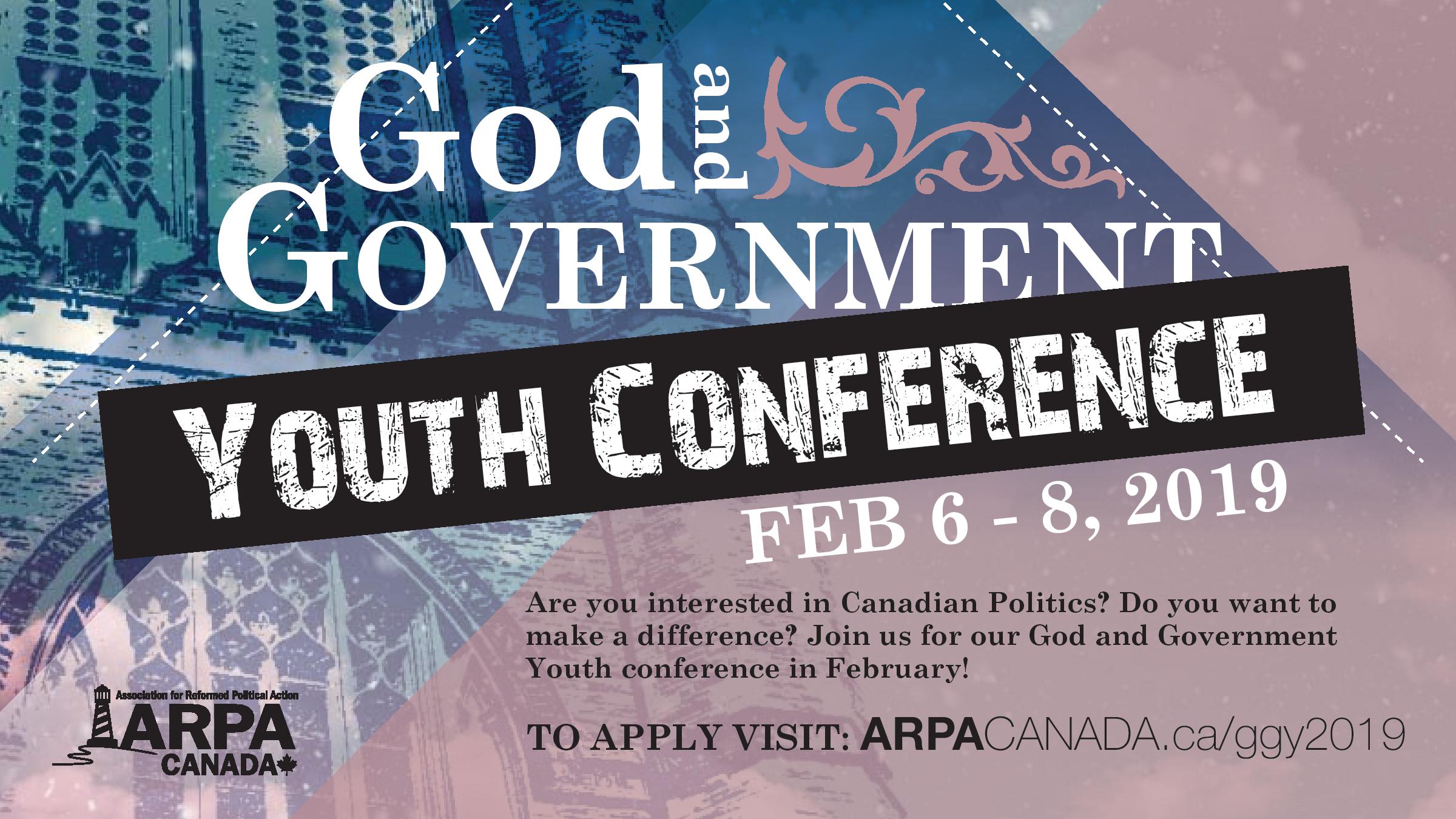 Are you a student interested in Canadian Politics? Do you want to make a difference? Do we have an opportunity for you! We are very excited to announce that we will be hosting our second God and Government Youth conference from February 6 - 8, 2019 at our Ottawa office! Applications are open to any Grade 11 or 12 students attending a Reformed church in Canada. The deadline to apply is December 7, 2018. This conference will educate students on current political issues and equip them to get involved. Interested students are required to complete an online...

Help us bring God’s Word to every MP, Senator, MLA and MPP in Canada!     This year marks the 150th birthday of Canada and the 500th anniversary of the Reformation. To commemorate the special occasion, with your help, ARPA Canada is hoping to present a Bible to every one of our approximately 1,200 federal and provincial government officials. We plan to include a special card encouraging them to look to God’s Word for life and wisdom. “So is my word that goes out from my mouth: It will not return to me... 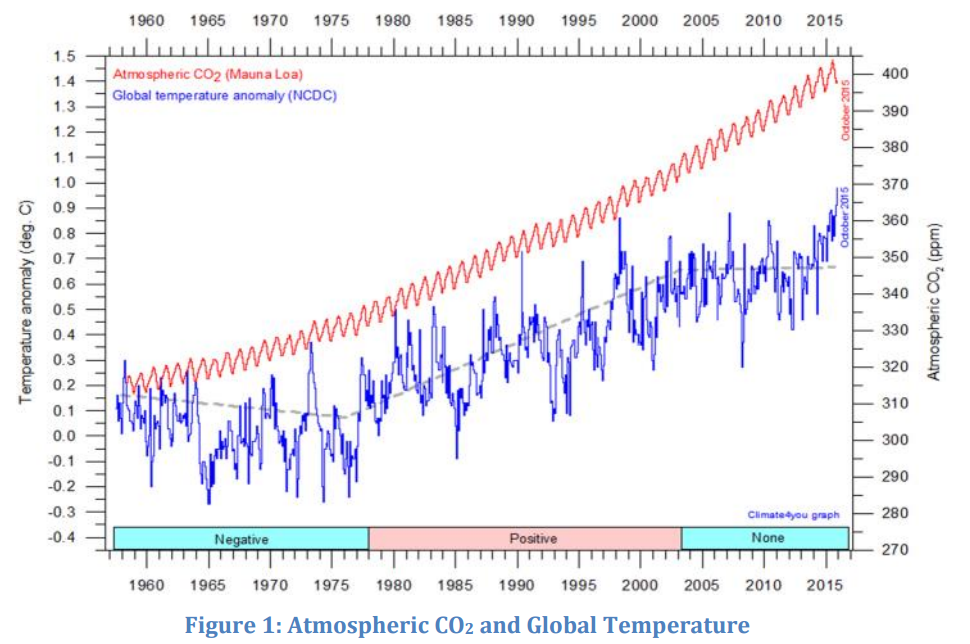 Posted at 20:44h in Environment 0 Comments
0 Likes
Share
Please see the attached pdf at the bottom of this article for the formatted version. Below is the text-only: Respectfully Submitted Policy Report for Parliamentarians In announcing his newly-elected cabinet, Prime Minister Justin Trudeau broke with the past by lengthening the title of the ‘Minister of the Environment’ to now include ‘and Climate Change’. This was meant to signal to Canadians that the new government is making climate change policy a priority, worthy of a key cabinet post. One of Minister Catherine McKenna’s first tweets as Minister was, “Canada agrees the science is indisputable, and we recognize the need for urgent/greater action that is grounded in robust science.” The Association for Reformed Political Action (ARPA) Canada shares the Minister’s passion for grounding climate policy in “robust science” and encourages the Parliament of Canada to re-examine the facts and ideologies directing climate change policy. The idea of climate change – specifically catastrophic anthropogenic (man-caused) global warming – was brought to public attention when high-profile environmentalists and politicians publicized statistics showing a rapid increase of the earth’s temperature since the industrial revolution. The signing of the United Nations Framework Convention on Climate Change (UNFCCC) in 1992 and Al Gore’s Inconvenient Truth documentary popularized the cause. Based on computer modelling of historic weather patterns, cataclysmic predictions were made: total polar ice-cap melts, dramatic increases in sea levels, flooding in some areas and severe droughts in other areas, the extinction of animal and plant species, and the increase of natural disasters, plagues and famines which will alter the lives of billions of people across the globe. Such predictions are understandably alarming.
Read More

ARPA Canada's Executive Director and Legal Counsel are among the signatories of a quality declaration from the Cornwall Alliance titled "Protect the Poor: Ten Reasons to Oppose Harmful Climate Change Policies." We joined over 20 climate scientists, along with many economists, policy experts, and ministry leaders and we encourage our readers to consider signing onto this declaration as well (please note that this declaration is available for all citizens to sign, not just those with fancy titles and educational degrees). Among other things, the declaration calls on political leaders "to...

Posted at 20:21h in Environment 0 Comments
0 Likes
Share
Updated with Reader response below UPDATE from author: I have had an incredible amount of interaction on this post, with many Reformed readers strongly opposed to my position for various reasons (for example, see the discussion on our Facebook page here). I have been very impressed with the overall tone and respect used in the dialogue. Those opposed to my arguments have shown much grace when interacting with what I wrote, which I really appreciate. I have in the past written about much less important issues in secular forums and have been verbally assaulted for my views, so I must say that I much prefer interacting with fellow Christians on very sensitive issues. Furthermore, because of the respectful tone, I am all the more compelled to rethink my position. I'm not sure yet if I'll write more on this topic (I'm hardly qualified to do so from a medical perspective, although the more theoretical questions of public policy remain intriguing to me). Nevertheless, I want to republish a counterpoint to my counterpoint from one concerned parent. He wrote thoughtfully and thoroughly, carefully interacting with my arguments while exemplifying grace in his critique. Thank you! Please see appended below for the text of the counterargument. As always, we appreciate your feedback.  One final note of clarification: many have referred to "ARPA's position" in discussing this issue. Please note - ARPA does not have a position on the vaccine issue. What is written below was the opinion of one staff member responding to the contrary position held by another staff member. Earlier this week, my colleague posted an article about the ongoing measles vaccination controversy in southern BC. After outlining the two competing Reformed views on the issue, he concludes, "Although there are differing perspectives on the issue, we should be able to agree that it is a parent's responsibility to make decisions about what is best for their child and that authority can only be interfered with in exceptional circumstances. It is good for Christians to respectfully challenge each other's moral conclusions, as iron sharpens iron. There are huge consequences - including for our neighbours. But this is fundamentally a discussion for parents, families, friends, and churches - not the legal system." I accept his invitation to challenge his conclusion, as iron sharpens iron. While I am in total agreement with the first three sentences in the concluding paragraph above, I have concerns with the concluding sentence. When we say that measles vaccination is "fundamentally a discussion for parents, families, friends, and churches - not the legal system", I believe we have simplified the issue to our detriment. Indeed, in the discussions that surround this touchy issue, most who are against vaccinations make the error of lumping all vaccines together. But there is an enormous difference between a vaccine for a sexually transmitted disease (for example), and a measles vaccine. To conclude that not vaccinating your child against the potentially fatal or crippling measles virus is "fundamentally a discussion for parents" would be like saying that a child caught stealing cookies could be punished by flicking his hand or by having his hand chopped off with a meat cleaver, since child discipline is all a matter of parental authority - "fundamentally a discussion for parents". All our readers would agree that such a stance is indefensible. The reason is not because we think parents shouldn't discipline their child for stealing a cookie. The reason is because we need to examine the nature of the disciplinary action, apart from the broader issue of parental authority in child discipline. So also, with an issue like vaccinations, we need to examine the nature of the vaccines and their corresponding diseases, and not just vaccines in general.
Read More

Posted at 19:03h in Environment 0 Comments
2 Likes
Share
Mark Penninga, Guest Column - Interior News - February 15, 2012 : The Bulkley Valley is a very religious area. The number of churches is disproportional to most other B.C. towns. But religion comes in other forms too. Environmentalism, though often portrayed as empirical and far from the realm of spirituality, displays the tenets of a religion. In fact, one could make a strong case in arguing that the Environmentalism we see being promoted in the Bulkley Valley and much of the western world today has become one of the most dominant and least tolerant religions in the West.
Read More

25 Jan 2011 The Competing World Views of Environmentalism and Christianity

E. Calvin Beisner, Ph.D.. The Cornwall Alliance for the Stewardship of Creation: Religion is the root of any culture, and environmentalism has become a full-fledged religion in its own right. It is the most comprehensive substitute in the world today for Christianity so far as world view, theology, ethics, politics, economics, and science are concerned, and you need to understand it in order to counter it effectively, from presuppositions to policies, from classroom to movie theater, from evening network news to Internet and local...

ARPA Note: The EFC intervened in this case. Read their concerns and suggestions for follow-up here. Brian Lilley, Toronto Sun Dec 22 2010 - OTTAWA: The Supreme Court has delivered a split advisory ruling in a case involving the regulation of in vitro fertilization, cloning and the creation of human-animal hybrids. While the ruling is technically only an advisory opinion, it has the effect of striking down several sections of the Assisted Human Reproduction Act. Read more...

Globe & Mail, August 30, 2010: The UN climate panel should only make predictions when it has solid scientific evidence and avoid straying into policy advocacy, a group of national science academies said in a report on Monday. The UN Intergovernmental Panel on Climate Change (IPCC) was hit with a wave of criticism after acknowledging in January that its 2007 global warming report had exaggerated the pace of Himalayan glaciers melting. It had previously said the report had overstated how much of the Netherlands is below sea level. Read more...