That’s what I learned at an Ontario Bar Association (OBA) event earlier this year called “The All Families Are Equal Act: Celebrating and Understanding the Legislative Changes.” The event was a “professional development” seminar – something lawyers must attend from time to time to keep their law license. These things usually have dull names like “Recent Changes in Corporate Tax Law” or “A Primer on Real Estate Litigation”. But this session, the OBA notified us, was to be a celebration of recent changes to Ontario family law. They even had free booze.

Yet it wasn’t terribly celebratory.

Sure, the panelists – a judge, a professor, and four lawyers – were fairly pleased with Bill 28, which removed the terms “mother”, “father” and “natural parents” from Ontario statutes and provides for “family formation” via “pre-conception parentage agreements” and “surrogacy agreements” with up to four unmarried, unrelated “intended parents” contracting to share “parentage” of a child yet to be conceived via artificial reproduction. 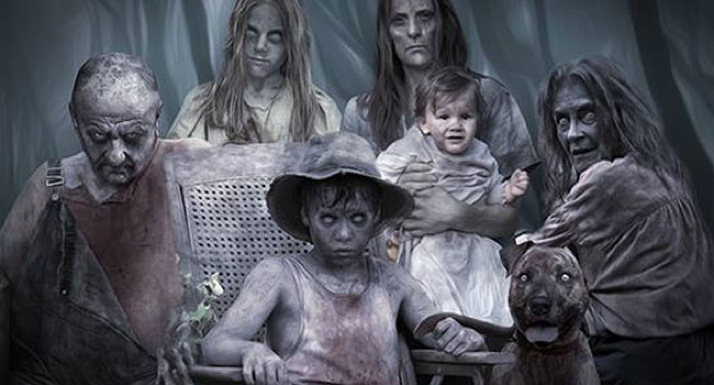 But according to one presenter, Professor Rachel Epstein, “we are haunted” by the traditional family. We’re still bombarded with images of Dad, Mom, and children in movies and TV shows. This old version of “family” is still prominent in people’s minds. And apparently, that’s a problem. (The photo is from the professor’s presentation.)

Another presenter, lawyer Joanna Radbord, who worked with the government on Bill 28, said that while the bill takes us a long way towards reconceptualising parentage and family, it still “privileges biology” in certain ways, and as long as biology is privileged, alternative families cannot be truly equal. How does the law “privilege biology”? While Bill 28 makes biology far less important, Ms. Radbord believes there is still work to be done:

We have a vastly improved regime now, of parentage, that has reconceptualised what it means to be a parent. So whereas […] it was about relationships of blood or adoption or declaration of parentage by court order, now it’s really about pre-conception intention.

So long as parentage is about biology, LGBTQ families are always going to be looked at as inferior, as less than, that we’re missing something, how sad there isn’t this biological relationship. We haven’t completely departed from biology with the new legislation […].

This is the worldview behind Ontario’s new law – that a “functional approach” to parentage should displace biology – and it’s hardly considered newsworthy.

The banality of judicial bias

There was also a judge on the panel. You might think she’d be a measured, reasonable voice among the cheerleaders for this bizarre bill. You’d be wrong.

In 2016, Justice Chiappetta presided over the case that spurred the introduction of Bill 28. That case was brought by several lesbian and gay couples, along with a group of four adults – two men, a woman, and an a-gender person. They were seeking declarations of parentage but also challenging the lack of default recognition of them as parents in Ontario law.

In 2007, for the first time, a “declaration of parentage” was granted to allow a person to become a legal parent to her same-sex partner’s child without formally adopting (AA v BB, ONCA). That made things easier. However, since natural parents need neither adopt nor apply for a declaration of parentage, the applicants before Justice Chiappetta argued that the law was still unjust towards same-sex couples and others who prefer alternative parenting arrangements.

It made no sense to me from a lay person’s perspective why the goodness of these people who were working together to produce children to people who truly wanted them, had to go through this process in order to be declared what everyone else knew they were: parents.

What I think her honour meant to say is that she knew intuitively that the people before her in court were parents because they identified as parents. But these people couldn’t all have been involved in “working together to produce children”, if you know what I mean. Rather, the group included people with no biological connection to the children in question, but who wished to be legally recognized as parents without having to adopt or apply for a declaration of parentage.

The judge then described her delight in presiding over this case:

From the moment I read the first word on that application, I got inspired. […] I knew right away that the applicants wanted action, [they] really didn’t want, you know, […] a big trial and then finally a decision that something is unconstitutional. They wanted action. And so we got together the next day at the case conference and the government explained that they couldn’t file their response because this was a very complex matter. […] I wasn’t as receptive [laughs] as perhaps some other people would be. We said ‘no, it’s not really that complex, give us your response.’

[…] And the government did need some time to figure out how this impacted the other legislation. And the lawyer to my left [Joanna Radbord] […] worked very well with government to effect change.

And fast forward to – to this day the most inspirational day that I’ve ever had as a judicial officer – the two parties came together with a proposed settlement that involved the government actually admitting that law, certain aspects of it, was unconstitutional and agreed to take specific time-sensitive steps to change it.

Rather than defend the democratically enacted law, the government’s lawyers, no doubt under the Liberals’ instructions, simply admitted defeat. This raises questions of democratic legitimacy (since the Attorney General can, by failing to defend a law in court, ensure that law’s demise without a vote in the legislature), which I won’t get into in detail here.

The judge continued to describe the moment when the government agreed to work with Joanna Radbord to change the law according to a set timetable:

And it was such a celebration of the evolution of the law that should have been at that place many years ago. And I wanted to specifically talk to all of you as lawyers in the room, to tell you that this is an example of how you can effect change, how you can evolve the law.

You know, as judges our job is to apply the law, and once in a while we get those cases where we can push it forward. But your job is to change the law. […] So when you talk about this Act, celebrate how far we’ve come, realize that it’s only a first step, and understand from your own personal perspectives, your own professional perspectives, that you have the power to evolve our laws in the way that they should be evolved.

Here is a judge celebrating “the evolution of the law”, declaring that it “should have been at that place many years ago” and saying that Bill 28 “is only a first step”. Her comment about judges getting cases where they can push the law forward also raises an important question that she did not answer: what principles distinguish cases in which a judge must apply the law from those in which the judge may or ought to change the law?

She tries to couch her activist stance with her comment that it’s really the lawyer’s job to change the law, rather than the judge’s. But a lawyer has no power to change the law, at least not directly. A lawyer can only persuade those with power to do so, namely judges.

While Justice Chiappetta urged the government to work out a solution, she did not actually strike down the law in question. There was no need. The Liberal government had the pretext it needed for a radical revision of Ontario family law, which came to fruition in Bill 28.

That pretext wasn’t questioned. The Opposition rushed to support the bill, apparently without considering the events, people, or philosophy behind it, or caring what Ontarians would think. In fact, it seems many MPPs would prefer that people simply not think about it at all.

Bill 28 passed four months ago with zero opposing votes. It’s hard to imagine such a radically left-wing social agenda going completely unopposed at the federal level, where at least a few vertebrate MPs remain. Maybe Ontario is more liberal than Canada as a whole. Or maybe we tend to pay too little attention to provincial politics. Ask Ontarians what they think about the All Families Are Equal Act and I’m pretty sure most will have no idea what you’re talking about. That seems to be what Progressive Conservative leader Patrick Brown is banking on. He seems to think that by only talking about hydro rates he can coast into the premier’s office. Perhaps he can. Perhaps he keeps the Christians and “so-cons” in his caucus silent by the carrot of electoral victory and the stick of party discipline.

But sooner or later, this agenda is going to get pushback. As more people feel the impact of recent legislative changes, more will call out MPPs for failing to stand up for “traditional” families and for the children who are “products” of preconception co-parenting contracts and will never know their real parents.

If parentage is defined by intent, then it’s as weak as one’s will. In that sense, the parent-child relationship is following the path towards what marriage has become: a voluntary arrangement at the pleasure of the parties. Of course, it has been harder to reconceptualize the parent-child relationship in terms of autonomy and choice. Your father and mother are your father and mother regardless of their intentions, or so you can’t help thinking.

But you are “haunted” by nature and history. The law cannot be based on such backwardness. Natural distinctions must be erased and natural bonds broken to make way for a world where everything, including family, is governed by pure individual choice.

Perhaps, after sacrificing too many children on the altar of autonomy, we will realize that ignoring God’s design to suit our own preferences can never bring about utopia. Maybe we’ll realize, eventually, that it’s good being “zombies” after all.

Bill 28: All Families Are Equal (Ontario), Ontario Email Us