Imagine a parallel universe in which British Columbia and all of Canada were ruled not by adults, but by students.

Two weeks ago, British Columbians went to the polls to elect a new provincial government. A little over a year ago, Canadians also elected a new federal government. We all know the outcomes: the BC NDP won a solid majority at the provincial level, with the BC Liberals bleeding seats and BC Greens maintaining their support. At the federal level, the Liberals won a minority government. The Conservatives formed the official opposition, though under-performed expectations. The NDP staved off collapse. The Bloc Quebecois made a resurgence in Quebec. The Greens failed to capitalize on recent provincial successes. And the upstart People’s Party failed to gain a seat.

But imagine a parallel universe in which British Columbia and all of Canada were ruled not by adults, but by students.

This parallel universe is constructed by CIVIX, the facilitator of Student Vote. Student Vote allows students at elementary, middle, and high schools across a province or across the country to vote for their preferred candidate, even though these votes do not count in the actual elections. Student Vote counted and calculated their own electoral results.

[/vc_column][/vc_row]
In this alternative universe, 86,121 British Columbian students elected a majority NDP government with 58 seats and 40% of the popular vote. That result is comparable to the 55 seats the BC NDP are projected to win in British Columbia. Where the results from the student election and the actual election diverge, however, are for other parties. The students elected 17 BC Green, 12 BC Liberal, 1 BC Conservative and 1 BC CHP MLA, while the adults are projected to elect 25 BC Liberal and only 3 BC Green MLAs. That is quite the difference. 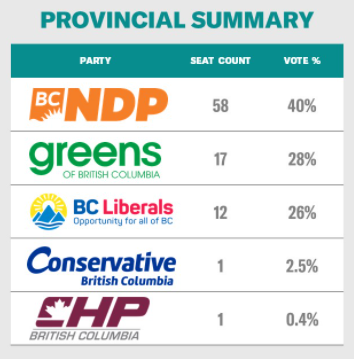 The federal Student Vote results paint a similar picture. Exactly 1,199,939 students participated in Student Vote, electing Justin Trudeau’s Liberals with a slim minority government with 109 seats and 22.3% of the popular vote (compared to their actual 157 seats and 33.1% of the vote). Jagmeet Singh’s NDP came in second with 99 seats (compared to 44 seats in the real election) and actually garnered a greater percentage of the popular vote than the victorious Liberals at 24.8% (compared to 16.0% of the vote in the official election). 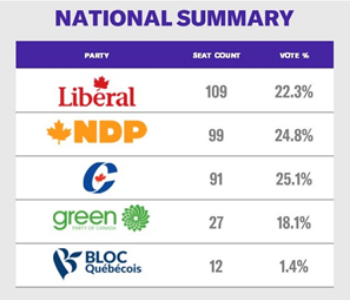 The Conservatives, lead by Andrew Scheer, earned a third-place finish, with 91 seats but the greatest proportion of the popular vote at 25.1%. (They actually received 121 seats with 34.3% of the popular vote.) Finally, the Green Party saw a massive uptick in support, winning 27 seats and 18.1% of the popular vote (compared to 3 seats and 6.6% of the vote in the true election.)
Young people lean further to the left than the general Canadian population.

Are there any patterns to these student votes? Yes. We can clearly see that young people lean further to the left than the general Canadian population. In the British Columbian election, the right-leaning parties (the Liberals, Conservatives, and CHP) were less popular with students, although the students did elect one Conservative and one CHP MLA when the adults did not. At the federal level, the right-wing Conservatives and (left-of-) centrist Liberals also received far fewer seats and fewer votes from the students. In both cases, the leftist NDP and Green parties performed far better in the student elections than in the actual elections.

CIVIX conducts the Student Vote so that students can learn about the political process and political parties. But the greatest lesson taught by the results of the student vote might be for adults. 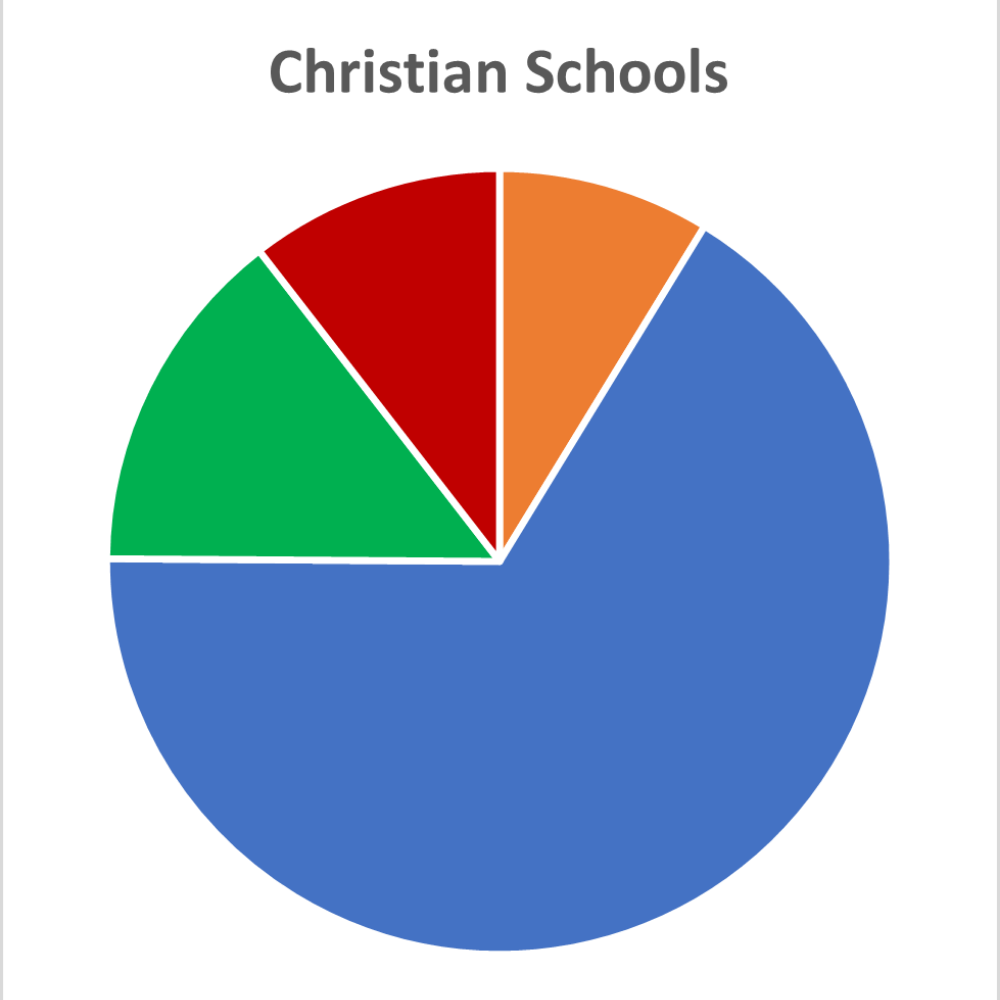 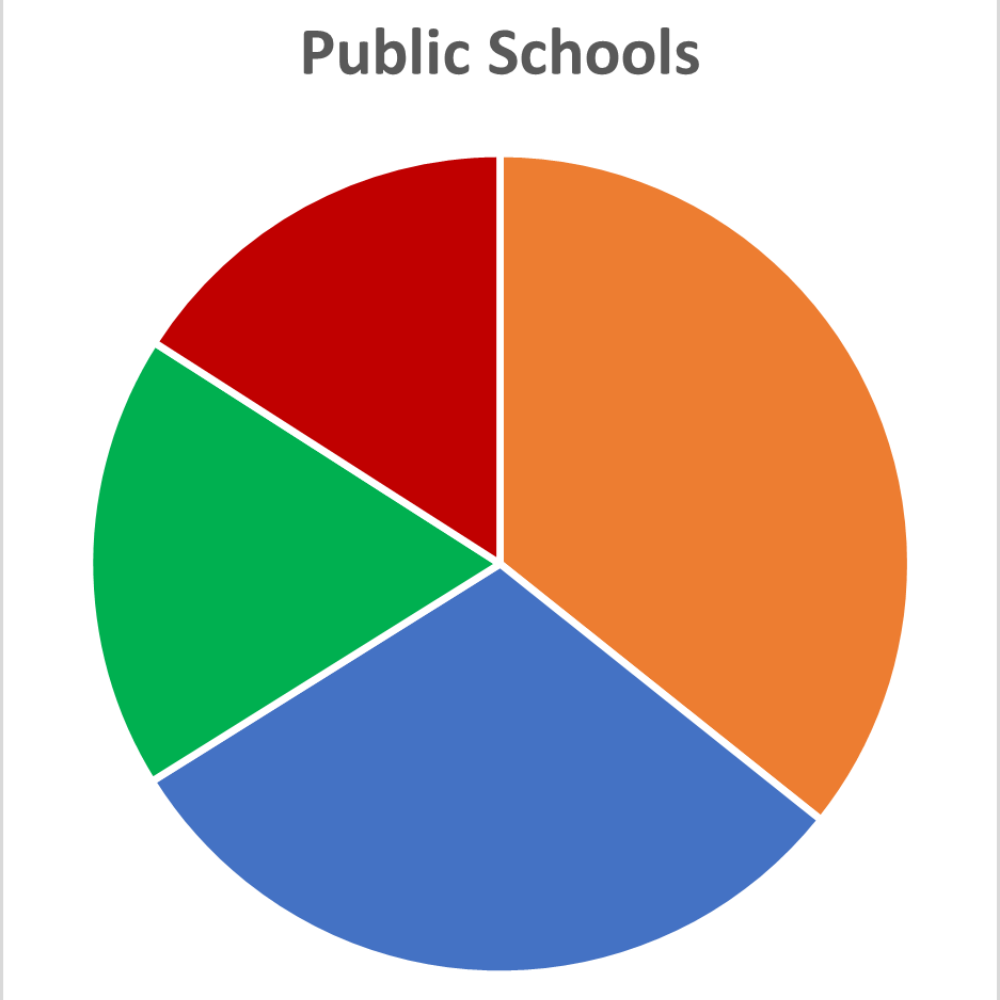 Although the precise make-up of this vote pattern will vary between schools and between ridings, these graphics teach an important lesson. The point of all this is not to illustrate that one political party is necessarily more Christian than another, but to demonstrate how different schools incubate very different (political) worldviews. Vladimir Lenin, the architect of the communist regime in the Soviet Union, famously remarked, “Give me four years to teach the children and the seeds I have sown will never be uprooted.” He understood the critical role that formal education has in formulating the worldview of children.

Christian parents must grasp this importance too. Parents should not expect to inoculate children in the home or at church against unbiblical teaching or negative peer pressure that may exist at a particular school. Christian education must be recognized for what it is: an indispensable part of “training up a child in the way he should go.” Christian education does not automatically guarantee that all students will have the same perspective on every topic or prompt future citizens to vote solely vote for a particular political party. There is a diversity of political thought in Christian schools (see above). Instead, a Christian education provides a Christian framework within which to view all of life, including politics.

Christian education must be recognized for what it is: an indispensable part of “training up a child in the way he should go.”

The next generation will elect our future governments. The worldview and education that shape them now will shape the future of our country’s political landscape. Continue to stand up for Christian education and continue to train our young people about a Christian perspective on politics.