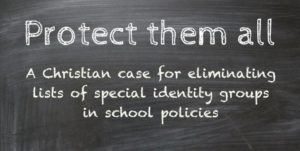 ARPA is out with a new policy report. This one is entitled “Protect Them All”, and it deals with anti-bullying policies in schools. Law and Policy Director André Schutten says a lot of provinces have been imposing on all schools – including independent Christian schools – an idea or a philosophy of bullying and student protection that’s “fundamentally unjust, and informed by unChristian ideology.” As a counter to that, Schutten says ARPA’s report acknowledges that bullying is sinful and intolerable, but that there is a distinctly Christian approach to dealing with it.

Schutten says the policies that are being proposed in most provinces are based largely on prohibiting bullying based on so-called “identifiable characteristics” that are outlined in provincial Human Rights Codes; things such as race, gender, or sexual orientation. But he says that worldview is fundamentally flawed, and misses some major realities. “If we’re looking at bullying only through those identifying factors, then we’re going to be blind to real types of bullying…that doesn’t fall neatly within this long list of categories.” He says the existing policies miss things like grades, socio-economic status, body image, or even hair colour. (Redheaded children usually get bullied more often than others.)

Schutten says the policy report proposes a different way of looking at the issue of bullying, and it goes even beyond just acknowledging that it’s wrong because all people are made in the image of God. “A distinctly Reformed approach would be to take cues from our Heidelberg Catechism, especially when it’s dealing with the 10 Commandments; especially the ones dealing with interpersonal relationships. It’s not only ‘do not kill or do not murder’, it’s not only ‘do not lie’, but there’s a flip side to it as well, (to) promote your neighbour’s honour and reputation as best you can. Do whatever you can to promote the well-being of those around you.” That kind of policy, he says, would be very positive in encouraging and growing a community that’s “safe, loving and encouraging”.

You can see a full copy of the report here.