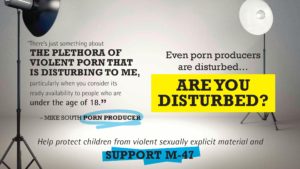 MP Arnold Viersen, from Neerlandia, Alberta, has introduced a motion in the House of Commons regarding online violent and degrading sexually explicit material. Motion M-47 reads as follows:

That the Standing Committee on Health be instructed to examine the public health effects of the ease of access and viewing of online violent and degrading sexually explicit material on children, women and men recognizing and respecting the provincial and territorial jurisdictions in this regard and following completion of its study, report back to the House no later than July 2017.

Violent and degrading sexually explicit material is easily accessible to anyone with access to the internet, without restriction. As the medical community has discovered, this is having a significant harmful impact on the mental, emotional and sexual health of children, women and men.

Incredibly, the last major study, completed in 1985 by the Special Committee on Pornography and Prostitution (the Fraser Committee), was completed before the invention of the World Wide Web.

Sexual violence and degradation are, sadly, all too common. Recent reports include the tragic cases of Rehtaeh Parsons and Amanda Todd, as well as the scandals involving the St. Mary’s University frosh week and the Dalhousie dentist students. These stories force an important question on our society and Parliamentarians: Where do the individuals in these reports get the notion that sexually violent and degrading attitudes and behaviours toward women and children are normal and acceptable? Where is this being learned?

It is time that Parliament makes this a priority! Engage with the action items below to promote this motion, and please pray that it is used to wake Parliament up to the evil that pornography is.