Select one of the steps below to get started!

What’s this all about?

School districts across British Columbia have been adopting an initiative called SOGI123.

This policy on SOGI – an acronym for sexual orientation and gender identity – is couched as an anti-bullying initiative, but it is far more. It teaches a humanist understanding of sexuality, as a subjective identity, divorced from biology, determined individually, and to be celebrated unconditionally. This in direct contradiction to a Christian understanding of sexuality, its God-given design, its corruption by sin, and its need for redemption through the Cross.

Since its introduction, SOGI has been a controversial topic. It heated up even more this fall before the municipal elections with some trustee running on either a pro and anti-SOGI123 platform.

This is your chance to have a say in this conversation. Pick one, or more of the steps below and send the associated EasyMail letter to your MLA. 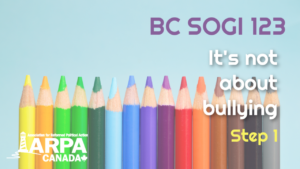 Step 1: It’s not about bullying

There is a false dichotomy being presented around the SOGI123 initiative – that is that in order to be against bullying you have to be for SOGI123. This is categorically false. Christians believe that gender is tied to biological sex and that sexual intimacy is reserved for a marriage between a man and a woman. But we are also against bullying as a central tenet to living out our faith.

The Bible makes it very clear that we have a duty to show love to all humans including those who are different from us (Deuteronomy 10:19; Hebrews 13:2) this even extends to enemies and persecutors (Matthew 5:43-48). And of course, it extends to children (Matthew 19:14).

We lay this all out because we are opposed to SOGI123 but are also very concerned that all students are respected and not bullied.

But SOGI123 is being characterized as merely an anti-bullying initiative. This is quite simply untrue. It goes beyond seeing the worth of every child and protecting them, to making statements about sexual orientation and gender identity that are both against my beliefs as a Christian as well as against our human nature and scientific facts.

We are asking the Minister of Education to evaluate SOGI123 not as one side being against bullying and the other side being ambivalent to it. But since all parents (and indeed all BCers) are against bullying, what is the best approach to take to some of the most contentious and sensitive topics that might come up in class.

Send an EasyMail to my MLA that it's not about bullying! 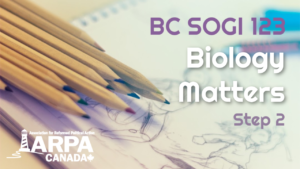 SOGI123 is operating under a false interpretation of biology: that one’s gender is subjective and that individuals can determine which gender they will be as distinct from biological sex. SOGI123 presents gender as fluid. Pushing beyond that, this curriculum promotes that whatever gender a child chooses should be celebrated and accepted without question.

Gender is not just a social construct, which changes with cultural shifts or the way people feel. Rather, it is rooted in the scientific facts of biology. God created humans as male and female. All people are born either male or female, and this is written in the DNA of every cell in the body. When this reality is ignored there are serious impacts for a person’s well-being, physically, psychologically, and socially. There are those who struggle with questions of gender, and we are called to treat them with compassion.

We present this because we care about the well-being of all youth and are compelled to correct some misleading ideas in SOGI123.

SOGI123 states that gender is subjective to an individual’s feelings. But we must use scientific and social research to support policy changes, and not political or social ideology.

We ask the Minister of Education to evaluate SOGI123 in terms of reality. We all want to see students flourish. The only way this can be done is to establish who we are as human beings, including the biological fact that we belong to one of two categories: male or female.

Send an EasyMail to my MLA that biology matters! 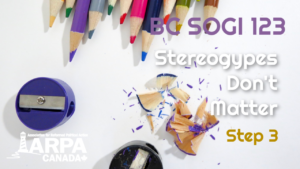 SOGI 123 teaches a contradiction about gender. It teaches that male and female gender are irrelevant and indistinguishable but, at the same time, if a child chooses to express him or herself as the opposite gender (usually by employing gender stereotypes) this is encouraged. Since gender is viewed as fluid, and biological sex is not seen as affecting gender, it is what children feel that makes them male or female. This often leads to an immature child deciding that if they like the colour pink they must be female and if they like sports they must be a boy. But neither are actually indications of gender. Biology is.

It may be true that more boys like sports than girls, and more girls like pink than boys. But exceptions to this stereotype do not in any way suggest a different gender. A girl playing sports is still female. A boy wearing pink is still male.

We cannot hold children to inflexible gender stereotypes, but we also cannot remove the distinctions between the two sexes entirely. Physically, psychologically, and mentally, boys and girls are different. Research shows that nurturing “boyish” or “girlish” development is not a social construct but is part of our nature. Boys and girls will flourish when they are raised according to the sexual category that they belong to.

SOGI123 creates a false understanding of gender stereotypes and fails to recognize the differences between male and female. This creates a culture in which children become confused and unsure about their identity.

We ask the Minister of Education to evaluate SOGI 123 in light of the obvious differences between boys and girls. We all want to see children flourish and must determine the best way to help this process. Loving a child struggling with their identity starts here.

Send an EasyMail to my MLA that biology matters! 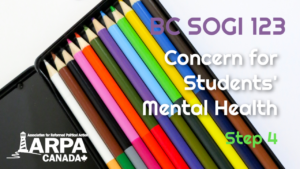 Some people struggle with mental health issues regarding their gender. Gender dysphoria describes a mental condition experienced by some individuals who do not feel their biological sex aligns with how they feel about themselves, and experience distress as a consequence.

Surgery and/or hormone treatments do not guarantee that the tension experienced through gender dysphoria will be resolved. “Sex changes” cosmetically alter the bodies of individuals experiencing gender dysphoria, but do not bring unity between mind and body. Gender dysphoria’s psychological components cannot be ignored, and physical treatments to do not address very real mental health needs.

The idea that SOGI 123 supports individuals in their desire to change their sex or gender not only denies the biblical foundations of what gender is, but also promotes ignoring a mental health disorder, causing larger problems, and often physical harm to vulnerable children.

We are asking the Minister of Education to re-evaluate SOGI 123 in terms of mental health. We all agree that the mental health of students should be a priority, and those facing a disconnection between their minds and bodies need more than physical change to achieve peace.

Send an EasyMail to my MLA regarding Students' Mental Health! 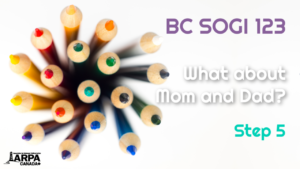 Step 5: What about Mom and Dad?

What about Mom and Dad?

The SOGI 123 initiative attempts to remove gender-specific words such as “mother” and “father”from language used in the classroom. This is part of an effort to normalize families with two mothers, two fathers, etc. This is based on false perceptions about what gender is and how families work. There are two genders, and both complement each other. Men and women, while equal, have differing roles.

God created us as male and female. Gender-specific language logically follows. We believe that the only biblical way of marriage is between a man and a woman. If there is a breakdown in a marriage, or a child is adopted into a same-sex family, each child still has one mother and one father. We are called to show love to all children, regardless of whether they have a father and a mother at home, have same-sex parents, or come from a single-parent home. All children are created in God’s image and should be treated as such. Yet, our language should continue to reflect the reality of binary gender roles in procreation.

We are opposed to SOGI 123, and we care about how children are taught about and view gender and relationships because this is embedded in human biology.

By attempting to remove gender-specific language, SOGI 123 neglects both Christian belief and scientific facts. It creates confusion for children, and undermines a basic and natural unit of society.

We are asking the Minister of Education to evaluate SOGI 123, and to keep children in mind. We do not want children to struggle with fluid ideas of gender and marriage, and we should continue to use gender-specific words.

Send an EasyMail to my MLA asking 'What about Mom and Dad?'